Finland’s Revulsion have been around since 2010, and in that time have dropped three independent releases; a demo, an EP and a single and now are set to finally release ‘Revulsion’, their debut self-titled full length. It has definitely been worth the wait.

Sound wise it has a Scandinavian Death Metal feel that merges with an element of Morbid Angel’s Domination era, a combination guaranteed to grab my attention as well as being a commendable quality.

Similarities aside, this ten track, thirty seven minute offering is a delight to the ear in its own right. It casts a fleeting acknowledgement to the old school sound, but without being stuck in the past. There is a contemporary aspect there also and it has that ‘stands out’ quality that Scandinavian Death Metal has for me over other Death Metal, with the perfect balance of grit and groove. This is something that I can not help but be drawn to. Overall ‘Revulsion’ manage to balance all their elements perfectly.

The album contains the two tracks from the 2016 single, the opener and brutal driver, ‘Last Echoes of Life’ with its sinister undertones that balance against the groovier elements. This is a track which definitely encourages further exploration of the release. Also here is ‘Walls’ with its hypnotic dirty groove.

One of my favourite tracks of this release has to be ‘Mustaa hiiltä’. It is a little different to the other tracks. I love the sinister doomy quality to its construction, along with the superbly protracted and well intonated growls from Aleksi Huhta. A magnificently dark atmospheric track.

Both ‘Pyre’ and ‘Lihaan sidottu kirja’ boast a pounding dirty and unrelenting drive, thanks to some standout drum work both here and across the whole release from Atte Karppinen.

Then it is back to the dirty driving groove with ‘Wastelands’, followed by ‘Unravel’ which has a very appealing, dark sinister drive to its delivery.

‘Silence’ has a crushing but bouncy drive and sinister undertones. ‘Pawns’ with is unbridled brutality and drive, may only be just over two minutes in duration but it is an utter beast of a track.

On the closing track ‘Viimeinen rituaali’, I love the hypnotic dirty groove and the flourishes of emergent drum work which make a final assault amidst the squealing guitars to the close, as well as the way the track repeatedly drifts away, taunting you, only to come surging back.

The seemingly understated artwork, which on closer inspection is fascinatingly intricate, is by Kuba Sokolski (Thou).

‘Revulsion’ will certainly appeal to fans of Morbid Angel and Paganizer. 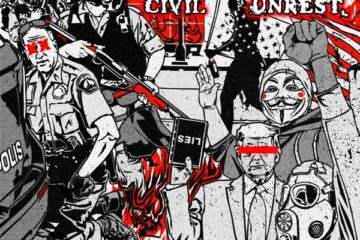