Everytime I hear the name Steve Lukather the theme tune to Ghostbusters starts ringing round my head. That is probably due to the fact that the always in demand legendary Toto guitarist has worked his magic on an estimated 1,500 albums, including the biggest of all time, Michael Jackson’s gazillion selling ‘Thriller’. So the chant of ‘who you gonna call, Steve Lukather’ maybe is not as absurd as you may think.

This man, with one of the most recognisable heads of hair in music, is quite simply one of the most versatile guitarists to ever strap on a six string. Although globally recognised as the main anchor in Toto and a member of Ringo Starr And His All Star Band, his solo endeavours in comparison would be considered under the radar.

‘I Found The Sun Again’ is his eighth venture going it alone and probably the most honest piece of work he has released as a solo artist so far.

As ‘Luke’ told MetalTalk here, “I just wanted to make something different, because everyone just makes the same record now – they all sound alike.

“The idea was just hire the right guys, then no rehearsals, no click tracks, no demos, no protools.

“I wanted to get a real performance. I wanted to see if I still had it in me!”

With the eight tracks included recorded in just eight days, it is no surprise that a classic live aroma engulfs the album.

Opener ‘Along For The Ride’, co-written by former Tom Petty & The Heartbreakers drummer Stan Lynch, is an infectious rocker with a wacky little riff and bleeds a slick and soaring off the cuff vibe.

That is followed by Pop infused Jazz topped with some Honky Tonk piano, which brings out an abundance of flavoursome tones on ‘Serpent Soul’.

The first of three covers on offer is of Traffic’s ‘The Low Spark Of High Heeled Boys’, a ten and a half minute display of respectful homage. Joe Walsh’s 1974 composition ‘Welcome To The Club’ is given a bit of oil and grease and sounds positively reborn. 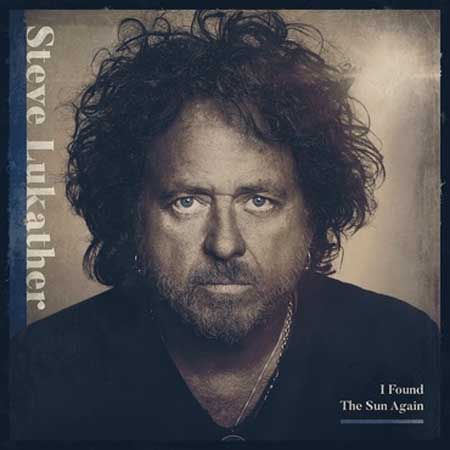 The last cover is a stunning tribute to English Blues Rock legend Robin Trower on the gripping  ‘Bridge Of Sighs, where Lukather makes his signature Luke lll guitar burn with a hair raising solo.

Title track ‘I Found The Sun Again’ might emanate a sombre and dark vibe, but when you lie back and drift away with the lyrics, you feel a song bleeding redemption.

‘Run To Me’ throws an exquisite piece of name-dropping in your face, with his other employer Sir Ringo Starr banging the buckets on what is an infectiously Beatle-esque track.

While Toto buddies Joseph Williams and David Paich put a shift in, this is most definetly a bona fide Steve Lukather album.

His reputation as a guitar player is set in stone for eternity.

But if you need reminding of his prowess as a songwriter, wrap your lugholes around the five deluxe originals on this album.

A portion of the proceeds from this album will be directed to The Ed Asner Family Center for Autism.