Here is the fantastic thing about having the privilege of reviewing albums – you are constantly coming across fantastic new bands that you haven’t heard before. This is the case for me with The Birthday Massacre and their latest album ‘Diamonds’.

Don’t worry boys and girls, I have rectified that and got hold of their back catalogue and completed my due diligence before writing this review. See, it’s not all rock and roll and lavish parties for MetalTalk writers!!

‘Diamonds’ is The Birthday Massacre’s eighth studio album and follows on from 2017’s ‘Under Your Spell’. Formed in London, Ontario and currently based in Toronto, they are a rock band that wear their late 80’s and early 90’s electronic pop love on their sleeves. Those of you that remember Jack Off Jill will be familiar with their sound. 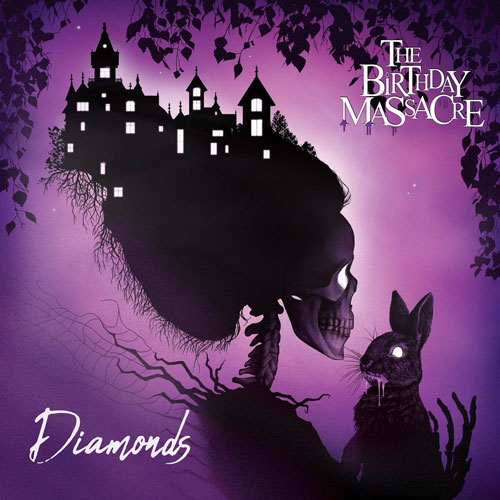 Fronted by the sultry tones of female vocalist Chibi, ‘Diamonds’ takes the listener on a journey back to those heady late 80’s and early 90’s days. Synths are up front and centre along with poppy grooves with the underlying snarl of guitars never far away. The whole package works really well and there isn’t a bad track on this album.

Opening track ‘Enter’ starts with a synth flourish before an infectious groove takes hold and we’re off and running. The first thing you notice is the production on ‘Diamonds’ is superior to that of ‘Under Your Spell’. Given their trademark sound, aural crispness is a must and ‘Diamonds’ is as crisp as a freshly ironed shirt.

‘The Sky Will Turn’ is a solid mid tempo track that showcases the wonderful voice of Chibli with Rainbow and M. Falcore cutting in with guitar slashes throughout.

Should an album like this be reviewed by MetalTalk? YES it should is the simple answer to that.