Deveraux, a solo affair by Paul Wiley (Marilyn Manson, Razor Candy), have released a video alongside their first single ‘I Want To Spend The End Times With You’. The track features vocalist Krsy Fox (Knee High Fox), who also directed and edited the video.

Paul tells us: “When the quarantine started I wrote the song. The lyrics were inspired by the thought of lovers spending every waking moment with each other and compromising for the other.”

The song is from the forthcoming EP ‘This Isn’t Going To End Well’ which will be released 2 June.

On the collaboration with Krsy Fox, Paul tells us: “I had worked with Krsy before on my first EP on a song called ‘I Love You In Leather’. At first this new song was just going to be a single, then Krsy suggested doing a video. So we all sent her footage and she compiled it into what is now the video.”

The video was shot by everyone individually during the quarantine at their homes in Los Angeles, Vancouver and Chicago. 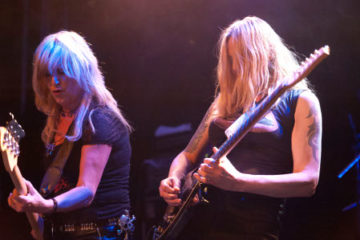