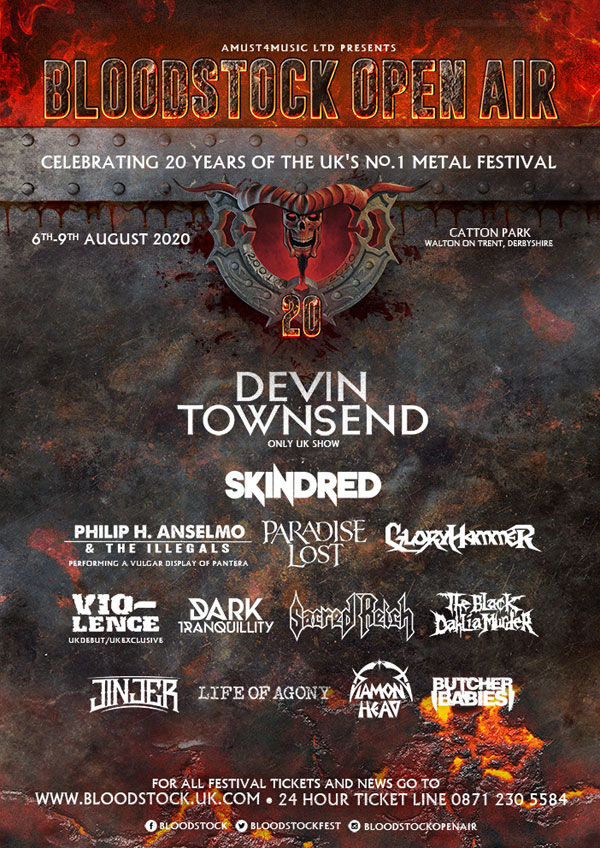 Philip H Anselmo & The Illegals will be bringing their much lauded ‘A Vulgar Display Of Pantera’ set to Bloodstock’s Ronnie James Dio Main Stage on Friday 7th August 2020.

The band will be performing a slew of Pantera classics and for a taste of what’s to come, check out this clip of a similar set performed earlier this year in Brooklyn, NY’s famous St Vitus bar.

Paradise Lost fans are in for a treat as the gothic-doom overlords will be performing their much loved fifth album, ‘Draconian Times’, in full on the Main Stage on the Saturday.

Released in 1995, it spawned the singles ‘The Last Time’ and ‘Forever Failure’ which you can revisit below. Now signed to Nuclear Blast, the band unveiled their fifteenth studio album, ‘Medusa’, in 2017 and hit the studio at the end of October to record the follow-up.

Life Of Agony will be playing the Ronnie James Dio Main Stage on Sunday 9th. New album ‘The Sound Of Scars’, released by Napalm Records just eleven days ago, serves as a sequel to their seminal 1993 debut, ‘River Runs Red’. Here’s the video for new song ‘Scars’.

When legends like Metallica and Megadeth cite them as an influence, you know they’ve earned their spot. Diamond Head play the Main Stage on Sunday and you can get into the title track of their latest album, ‘The Coffin Train’, which was released in May, right here.

Already announced for Bloodstock 2020 are Friday headliner Devin Townsend, as well as Skindred, Black Dahlia Murder, Jinjer, Gloryhammer, Vio-Lence, Sacred Reich, Dark Tranquility and Butcher Babies. Bloodstock’s remaining two headline acts will be announced before the end of October with many more bands performing over the weekend to be announced in due course.