MetalTalk caught up with the main man from Pain, Hypocrisy and many more besides, Peter Tagtgren, aboard the 70000 Tons Of Metal floating festival where Pain were appearing. 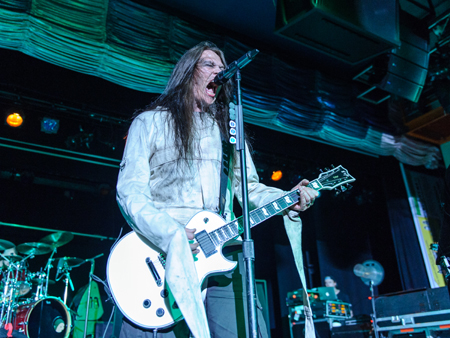 MT: How are you enjoying the 70000 Tons experience?

PT: “It’s pretty different! I mean we’ve done cruises before in Europe as well, but this is big, you know? It’s something else of course! It’s great, if you don’t want to be social then go to your room, if you want to be social you can hang out with people.

“It’s good that people don’t lose their minds when they see guys in bands, they see them everywhere so they don’t lose it when they do so it’s nice and easy and it’s calm. If you don’t want to see them you can go to your room but you shouldn’t be on this cruise if you’re scared of everything, that’s not the point. You’re supposd to be out and enjoying it.”

MT: So how were your shows on the boat?

PT: “Our first show as was at 2.15am on the first day so we were still on European time. So even the crew weren’t sure what to do and everything was delayed and stuff and so we had to cut some songs but in the end we did what we could. Tonight was a little bit better.”

MT: From the outside it certainly looks like it. 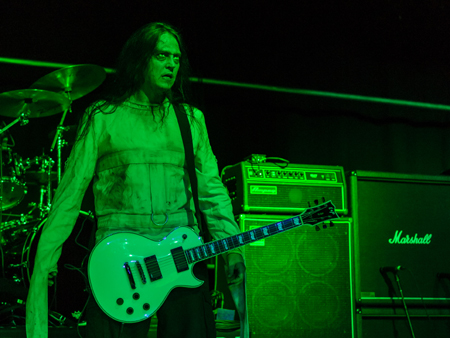 MT: Is that a deliberate strategy?

PT: “I think I want to do a little bit more production in the future. I did these recent Immortal drums and we’re waiting for the guitars to get ready so we can complete the album and I also did Carach Angren from Holland, a more orchestral Black Metal style. That one came out really good and it’s coming out in May I think.”

MT: It’s not too long since you did an album with Til Lindemann…

PT: “Yes, we did that one too, and that was really cool. Right now me and my son are writing some songs so we’ll see what’s going to happen with that, where it’s going to end up. If we do something totally different…”

MT: So that’s a separate thing to any plans for Pain?

PT: “Yes, totally different, completely separate. It’s definitely going to be heavier than Pain. I don’t know if it’s going to be as heavy as Hypocrisy, I don’t know. We only got four songs so far so it can go anywhere. You really never know so I’d rather not say anything, but we decided no keyboards. Everything we’ll fill out with guitars with nice harmonies and stuff like that, so no keyboards.”

MT: Going back to the Lindemann album he has his own peculiar sense of humour. Did some of that influence your writing on the Pain album ‘Coming Home’?

PT: “A little bit. When we were sitting and writing the Lindeman album, first of all we didn’t even know what to call the band, we had so many ideas. Then someone said just call it Lindemann and I was like but that means it’s just his band and they said ‘no, don’t worry about it’ so eventually I went ‘whatever, fuck it’. And yeah a little bit rubbed off on my lyrics but no one can take it as extreme as he does. It was cool though to get a different kind of twist into the lyrics for me as well, it was refreshing.” 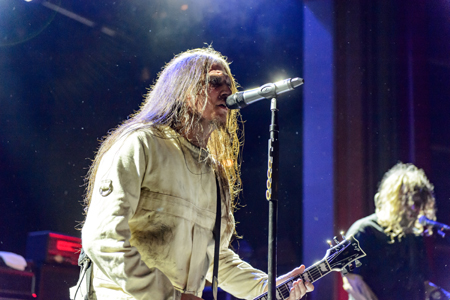 MT: He’s not influencing your live show too? You adding any flamethrowers?

PT: “[laughs] No, no. We’ll see what’s going to happen in the future, now they’re busy with Rammstein, to write some new stuff and they’re going to go out in summer again and do the festivals so they had to take a break. So I don’t know when they will be out with the album. We have to wait, nothing else we can do.

“I think maybe 2018 they come out with another album, probably tour for a year or two and then we can go back. We’ll just plan it, I’ll write up all the music again and then he can work on the lyrics when he has time. It should be three years maybe, I don’t know. But we will definitely do another one, another Lindemann album.”

PT: “Touring with Pain in the spring and also we’re doing some of the summer festivals and we’re working on an American tour now and hopefully we’ll do a South American tour also. Plus when I go home and have some free time, I will sit and write.”

MT: Is writing like that easy for you? Just squeezing it inbetween all your other activities?

MT: There are no Uk dates on Pain’s spring tour. Any chance you’ll be over our way anytime soon?

PT: “Not on that tour but I think we have to go back and do an only UK tour like we did four years ago, five years ago maybe. We went all the way up, all the way down, side to side and so on.

“Usually it’s pretty good to come back to the UK, even if we only did England this time, we can go back and do England again and also go to Scotland and Ireland and stuff. Do a week or two. I like going over there, especially when you go north and you can get some good whiskey, you know. [laughs]” 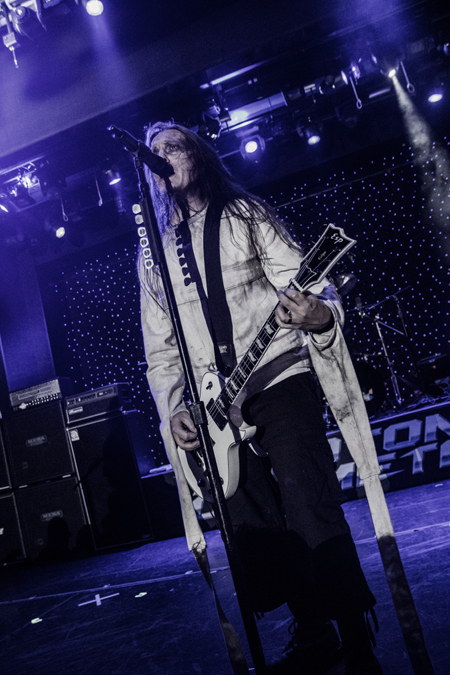 MT: It took five years between the last two Pain albums. Will have to wait the same length of time again?

PT: “The problem was that Lindemann took two years and I did the Hypocrisy inbetween and toured with Hypocrisy as well…”

MT: This is where I get the impression you’re really busy.

PT: “[laughs] It’s not that bad but if you think about ut, it’s five years ago, what did you do? Yeah I did shitloads but the Lindemann was more different, it required more time I guess from both left nd right. But I think it turned out really good.”

MT: Now that you have almost finished the work part of the cruise what are your plns for tonight, the last night on the boat?

PT: “I’m definitely going to go out and take a couple of beers, maybe watch a couple of bands. I think we get kicked out at 7.00am or 8.00am or something.”

MT: Yes, way too early! Where do you go from here?

PT: “We go straight to the airport and fly back home. We came the day before the cruise but we came so late down to Miami so we didn’t have time to do anything but I used to live in Florida, I was here for three years so I’ve seen everything [laughs].”

MT: Thanks for your time and good luck with the tour and your other activities this year.