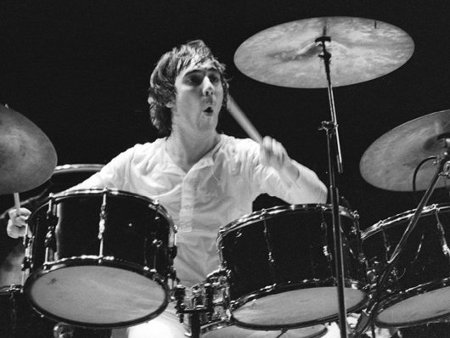 London 2012 Olympic organisers have reportedly inquired about The Who drummer Keith Moon’s availability to perform at the Games, 34 years after he died.

The manager of The Who, Bill Curbishley, told the Sunday Times he had been approached to see if Moon “would be available to play”.

“I emailed back saying Keith now resides in Golders Green crematorium, having lived up to the Who’s anthemic line ‘I hope I die before I get old’,” said Curbishley.

Notorious rock and roll wildman Moon, known as ‘Moon the Loon’, died in September 1978, aged just 32, from an accidental overdose of prescription medicine.

Moon was Paul McCartney’s guest at a film preview of The Buddy Holly Story on the evening of 6th September 1978. After dining with Paul and Linda McCartney at Peppermint Park in Covent Garden, Moon and his girlfriend, Annette Walter-Lax, returned to a flat on loan from Harry Nilsson, No.12 at 9 Curzon Place (now called Curzon Square), Shepherd Market, Mayfair in which Cass Elliot had died a little more than four years earlier.

Moon watched a film, The Abominable Doctor Phibes and requested Annette cook him a breakfast of steak and eggs. When she objected, he replied “If you don’t like it, you can just fuck off!”

These turned out to be his last words.

Previous articleMOTÖRHEAD WITH SUPPORT FROM GRAVEYARD
Next articleL.A. GUNS ARE BACK IN STYLE WITH BRAND NEW SINGLE