Nemesium / Enter a dark and twisted realm with ‘Continua’ 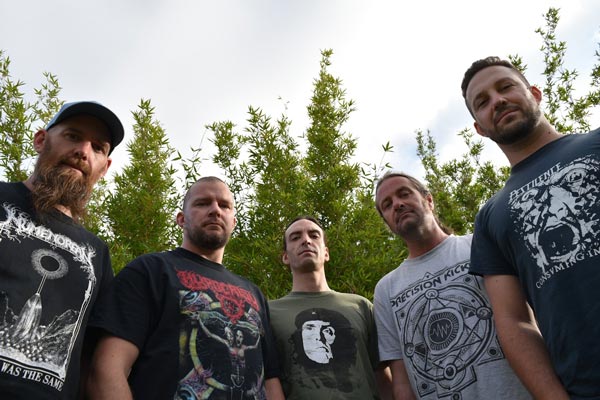 From the deep dark recesses of Geelong, Australia, comes Blackened Death Metal five-piece ‘Nemesium’ with their debut full length ‘Continua’. “A series of tales about torturous struggle, transition into a new age and the decimation of the world as it currently exists”, it is unnervingly current and all set to a crushing soundtrack that is an intense blend of Old School and Tech/Prog Death Metal, along with a 90’s Scandinavian Black Metal edge.

It is a much awaited follow up to their 2015 EP ‘Sentient Cognizance’ and follows in that mould, but takes things into a darker and more twisted realm.

‘Continua’ is an ambitious twelve track offering spanning fifty minutes and Nemesium inject a fresh and energetic vibe into their blend of influences.

You can look forward to a lot of technical excellence, razor sharp riffs, superb solos and drum work that is sufficiently complex and mad to keep up with the more insane guitar segments. There are quite a few such segments, but they are not overpoweringly excessive and along with raw rasping vocals, it delivers with clarity of content. 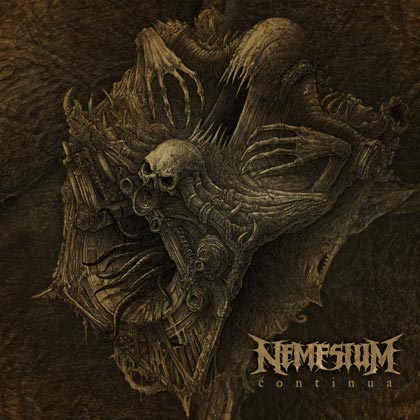 ‘Continua’ is a very busy album and is complex to the point of almost being befuddling for the listener. It takes extended focus to get your head around the complexities, but there is also something very engaging about this insane Metal frenzy that assaults you both mentally and aurally.

After the sound bite opener ‘Antecedent’, the first actual track ‘Archetype’ bursts forth as an unrelenting wall of riffs that attack your senses immediately – a track with plenty of punch. It is followed by the dark dirty and chunky ‘Boundaryless’.

A further assault on your senses comes with ‘Annihilation Prophecy’, but you can’t help being drawn to the those underlying technical waves and blackened driving riffs.

A very tribal sounding, brief drum interlude on ‘Continuum’ breaks things up a little before the second wave of assault in the shape of ‘Virch’, which does have a subtle melodic undercurrent and a killer second half lead burst.

The slightly slower pace of ‘The Fire and the Flesh’ might not agree with the more manic listener, but it has a pace that allows room for an exacting brutal punch, along with a very convoluted groove and some sinister blackened leadwork. I like it a great deal.

‘Cloud Chaser’ has some of the craziest second half leadwork you could imagine and in contrast the instrumental ‘My Final Fight’ is surprisingly calm, reflective and haunting. It serves as another necessary breather, before ‘The Dawn of Retribution’, a dark emotive and melodic piece that feels very Scandinavian and with enough brutal punch to deliver home.

Following a bass enhanced sinister opener ‘All for Them’, the song develops immediately into a convoluted chunk of technical mayhem, blackening as it progresses, with a tantalising ebb and flow and little melodic snippets that pop up. A bizarrely complex track that I am equally bizarrely drawn to.

Nemesium save their most impressive piece until last. The final monster of track at a massive seven minutes, so plenty of room to show off any as yet unrevealed talents. ‘Relive This Nightmare’ made me go “Oooohhh!” after its quiet reflective intro, blasting you with rapid delivery riffs, before breaking into a thrashy edged, but melodic groove, that is compelling and addictive, with mid-point and closing lead work that is so emotive it grabs you by the heart.