There is a massive thriving Metal scene in Wellington, New Zealand and Hadees Drudge are looking good for smashing into it with their debut album ‘On Your Knees’ set for release 30 August 2020.

The band were formed in 2018 and since then have been rigorous in their promotion, including frequent gigs around North and South Islands, hiking their songs ready for making the ‘On Your Knees’ album.

Heavy, riff based Metal abounds on the album. From the opening bars of ‘Rise Up’, there is a good sense of Metal tradition which matches with the bands claim of having “punchy, tight and on point with vocal lines that counterpoint the riffs.”

‘Wait For What’ is the albums epic track, screeching guitars and pace changes abound, making it a great challenging listen, while the vocals are splendidly spat out on tracks like ‘Scape Goat’ and ‘On Your Knees’, the latter one of the stand out pacier tracks on the album.

Guitarist/Songwriter Jason Keeler told MetalTalk: “We started recording August 2019 and finished during the COVID-19 lockdown around May, with mixing and mastering finished in June 2020.

“We have a massive Metal scene in Wellington and throughout New Zealand. Metal bands are playing every weekend throughout the country.

“There are probably a dozen music venues for the main circuit with a lot of smaller pubs and halls that also host bands.” 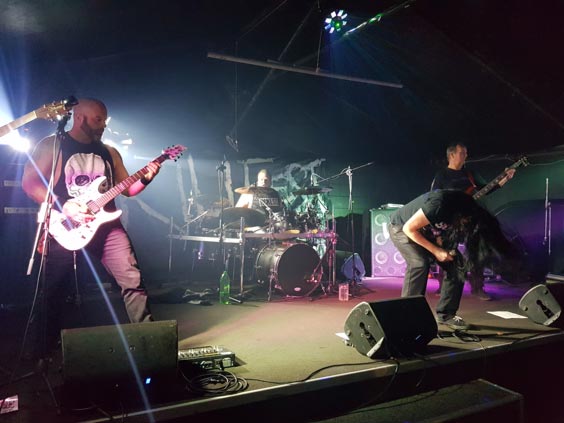 The bands planned album launch show is still on the cards, however with a reduced capacity.

Keeler continues: “Our album release is still going ahead on the 30 August. Looking like it will be limited to 40 people and seated unfortunately.

“However we are just excited to have our first headlining event and to have physical CDs for sale to show people what we are about.

“I do all the writing for our band including lyrics. Every Riff or idea for a song gets recorded on my phone.
When a song starts coming together I often go back through my recordings to find that one riff to use as a breakdown or pre chorus etc.

“Sometimes that riff that felt just wrong ends up fitting perfectly with the right riffs around it.

“Most of the songs I don’t spend time trying to write a certain genre I just let it come out naturally and then let the rest of the band come together, add their own style and that’s how we create our sound.”

Check out the Hadees Drudge single ‘No Escape’ below.