After a string of very fine, if not entirely consistent albums in the last several years, the erstwhile Antichrist Superstar himself has returned with his eagerly anticipated eleventh studio album ‘We Are Chaos’, and not a moment too soon.

He also has a formidable new partner in crime to write and record with in Shooter Jennings. After the pair collaborated on a cover of the David Bowie classic ‘Cat People (Putting Out Fire)’, they must have realized that they were onto something.

The album starts with Manson reading some Jim Morrison like poetry, before a sinister roll of drums and bass signal the start of the fairly heavy industrial menace of ‘Red, Black And Blue’. “I’m sick of you and all your attitude” growls a recalcitrant Manson.

The title track is up next and its release as the first single proved it to be a love it or hate it track. While some fans have decried the fact it doesn’t sound like ‘Antichrist’ era Manson, others have embraced it as a natural progression of his recent work.

I personally love ‘We Are Chaos’. It sounds like Manson singing with The Smashing Pumpkins circa ‘Mellon Collie’ and I can not imagine a better chorus to describe the state of the human race at present.

‘Don’t Chase The Dead’ is a return to a more traditional Manson sound of the ‘Mechanical Animals’ era, with an upbeat tempo and easy, sing-along chorus.

‘Paint You With My Love’ is the track that may just show the biggest influence from collaborator Shooter Jennings. The beginning sounds like The Flaming Lips featuring Marilyn Manson. It is hugely refreshing musically and also lyrically. To hear him leaving behind the often forced sounding lyrics about werewolves and crucifixion present on some recent albums, in favour of the more personal, wrapped up in psychedelic and religious imagery.

‘Half Way & One Step Forward’ has an expansive, cinematic feel with piano and even some slide guitar here – a real highlight, with Manson’s voice sounding particularly strong.

The chaotic guitars and sinister vocals of ‘Infinite Darkness’ make it musically the closest thing to late 90’s Manson on this album.

On the other hand, ‘Perfume’ is the type of anthem that would fit among the best of his ‘Born Villain’ era output. Sounding like a cross between ‘Disposable Teens’ and synthetic Glam Rock – it is a great and energetic track.

With its pounding drums and distorted riffs, ‘Keep My Head Together’ is another standout, upbeat track and one that would most likely benefit from being played at window shaking volumes.

The album finishes with ‘Solve Coagula’ and the somber ‘Broken Needle’ and at just over 40 minutes long, ‘We Are Chaos’ leaves you thoroughly satisfied and indeed wanting more.

Of the album itself, Manson told Metaltalk: “When I listen to ‘We Are Chaos’ now, it seems like just yesterday, or as if the world repeated itself, as it always does, making the title track and the stories seem as if we wrote them today.

“This was recorded to its completion without anyone hearing it until it was finished. There is most definitely a side A and side B in the traditional sense. But just like an LP, it is a flat circle and its up to the listener to put the last piece of the puzzle into the picture of songs.

“This concept album is the mirror Shooter and I built for the listener – it’s the one we won’t stare into. There are so many rooms, closets, safes and drawers.

“But in the soul or your museum of memories, the worst are always the mirrors. Shards and slivers of ghosts haunted my hands when I wrote most of these lyrics.

“Making this record, I had to think to myself: ‘Tame your crazy, stitch your suit. And try to pretend that you are not an animal’ but I knew that mankind is the worst of them all.

“Making mercy is like making murder. Tears are the human body’s largest export.”

Those fans who are waiting for Marilyn Manson to make ‘Antichrist Superstar’ Vol 2 will be in for a long and disappointing winter, because it is not going to happen, at least not any time soon.

They would also be doing themselves a huge disservice by missing out on his excellent new work.

What we have with ‘We Are Chaos’, is an icon no longer trapped by expectation or genre; a mature and reflective artist creating his art at ease.

In doing so, Marilyn Manson has produced one of the finest albums of his entire career. 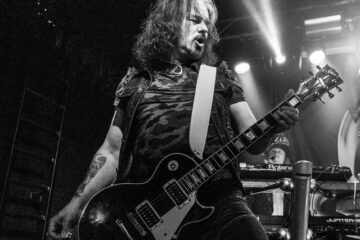