They come from the land of the ice and the snow, to quote Zeppelin, but Mad Nona, unsigned and self-financed, have had us tapping like ‘mad’ to their self titled debut album, which hit streaming services 25 September.

Influenced by the infamous Seattle sound, their sound is fantastic riff based Hard Rock, aggressive, but in a Heavy melodic style. Opening track ‘Paranoia’, the first of two tracks to appear on The MetalTalk Soundcloud Tracks Of The Week Playlist, is a beautiful introduction to the album and the perfect track to suck you in.

MetalTalk reached out to vocalist Arnar to find out more about theses Icelandic Rockers, who turned our ears so stunningly.

MetalTalk: First album, right….? How did you all meet? How long have you all been playing?

Arnar: “Yeah! This is our debut album and we decided to name it as the band for no obvious reasons.

“Thor and I met ages ago, but it was only through a mutual friend that this journey started. This mutual approached me at a bar while performing shitty cover songs for drunk ass people and just shouted at me, what the hell are you doing here, let’s rock brother.

“We then met Kristjan when the first Covid wave had cooled down a bit here in Iceland. We were impressed with his skills and ambition and just knew that this long hair tall dude was the one we were looking for.

“We have been playing together for almost five months now, but before the launch of the band we all had been a part of the Icelandic underground Rock scene for years.

“Even more so Kristjan, our beloved drummer even played with Skálmöld, one of Iceland’s most well-known Metal bands in the summer of 2014 ,while their drummer, Jon Geir was recovering from surgery.”

COVID-19 was one of the factors that helped the band, as this gave them time to get together and work on songs like ‘Rock ‘N’ Roll and ‘Tornado Jane’, which had been collecting dust, and turning other riff ideas into full crafted songs.

Arnar told us: “Although the COVID-19 pandemic has been a thing nobody could have wished for, it kind of got us to start doing what we love and what we are good at.

“We will be looking for ways to create videos in the upcoming weeks but this era we live in requires a lot of innovative thinking ways in trying to connect our music with future listeners and fans.”

The second track on the album, ‘King Of The Hill’, is one of those “riff ideas” turned into a full blown song and mighty fine it is too. The track may evoke some distant memories of Mötley Crüe or Guns ‘N Roses at their pomp, but that does not distract from a superb, individual song.

Listening to the album as a whole piece of work, is a great experience. There is a great variety here, which begs the question of their songwriting process….

Arnar told us: “While writing songs for the album, we decided that we would not follow the average song structure. Instead we wanted to do what sounded right to our ears. As a result, some songs don’t have a preferred chorus or pre-chorus, it was the feeling and the flow that led the songwriting way.

“As you might notice a few of our songs contain a lot of anger and the audacious lyrics on this album are based on both tragic events, past experiences as well as state of mind feelings.

“While recording the songs we used a drum kit software to kind of get the rhythm in shape, but when Kristjan put his stellar groove into our songs, the songs just got lifted to a higher class.

“Just to give an example he drummed ‘Paranoia’ in a way that we had never thought of and the way he used the snare and the kick in that song just blew us away.

“So, it all sticks together, although the songs had been written before Kristjan joined. But the drums are 50% of all Rock songs and he did an amazing job creating the beat.

“With our style in mind, we were able to push our boundaries by twirling Heavy Rock towards the rhythm of blues only to top it off with the perfect amount of Metal twist.”

As self financed, how did you get to the point where you all thought “yes.. lets go for it”?

“We are self-financed, that’s right and we were just lucky enough that our muscle boy, Thor, is not just an amazing guitarist but also a sound engineering fanatic and has a studio at home. (Btw. we are super proud of getting the sound we got by recording from his hallway).

“On a fine Saturday night, around a year ago, I started belting out and smashing Rock ‘N’ Roll on Thor’s acoustic guitar with a delicious tasting IPA next to me, we just knew, we had to do this now!” 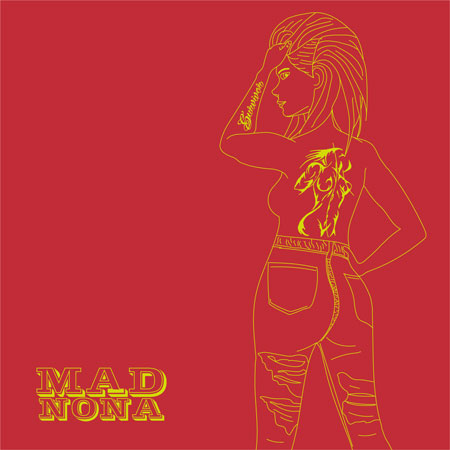 As for the future, well, the band told us that: “We want people to play our album at their parties, get wasted and love it.

“We want people to know that despite the bad things that happen to us there is always a way around it and even more so with music.

“Of course, we want big things but let’s face it we are an unknown independent band from Iceland which has a population similar to a village in England, so just the fact that people would enjoy it, love it, feel it and share it would mean the world to us.”

And for this well crafted and well executed album, hopefully it can get the well received recognition it deserves.

There are not many debut albums which suck me in so quickly, so listen to these two tracks and check the album out.

The last word is with the band: “Stay safe during this pandemic and take it very seriously, because we know by experience, this virus is one hell of a bastard.

“Also, stay true to who you are and try doing the most of what you love to do because we judge ourselves on what we do not what others think about us.

“Thirdly, if anything bad happens in your life, don’t let it beat you, get back on your feet and carry on! Don’t be a victim, be a survivor!”

Havok / 'Fear Campaign' is the song for now