Hellfest 2022 returns with a marathon double Heavy Metal edition featuring 350 artists on six stages over an extended weekend. Here are live updates from the MetalTalk team of Dany Jones, Kahmel Farahani, Ya Cheng and Aggie Anthimidou.

The fantastic Lemmy statue has been unveiled. It has some of his ashes in the centre.

Lacuna Coil draws a very large crowd this early Sunday afternoon – as the band come on in their corpse paint, it’s front-woman Cristina Scabbia who draws all the attention. Her clean, soaring vocals are the perfect foil for Andrea Ferro’s screams, and songs like Reckless get a field of hands in the air.

Lacuna Coil press conference – “It’s been very special for us to restart with the festival season because, for a while, we didn’t know if this would ever happen again, so it’s amazing for us.”

On the new album: “It’s not album number 10, but it is new music for a very special project. We’re also working on songs for the eventual new album, but nothing yet.”

Andrea and Christina talk about their love of video games and desire to do a whole soundtrack for a project. “Lots of gamers are hearing and loving Metal music and don’t even realise it – I go, yeah, you’re a Metal fan, you just don’t realise.”

That’s a wrap – will return for the Korn Press conference.

Day Two concludes with a blistering set from Megadeth [details to follow], astounding performances from Ghost and Airbourne and a rather well-received Social Distortion, writes Dany Jones. Their closing number, Ring Of Fire, saw the entire War zone getting up for a singalong.

The Hellfest organisers have pulled all the stops, and no expense has been spared.

After two years of enforced closure due to Covid-19, this festival has become as big as ever, and the attention to detail is truly remarkable.

The MetalTalk team took a stroll around the village to capture the best moments until they finally succumbed to the first rain of the weekend.

Time for a well-deserved drink at the VIP bar.

The Darkness bring their British glam rock stylings to Hellfest, this time with the help of Steel Panther’s Michael Starr for the final song, I Believe in A Thing Called Love.

However, this afternoon, the stage is entirely stolen by another band. If ever a band was created solely for summer festivals, it was Alestorm.

The tongue-in-cheek pirate rocker’s songs about drinking and dancing are so perfectly crafted for this crowd that it’s almost unbelievable. If Black Sabbath themselves came back and walked on stage, they couldn’t get a bigger or better reaction than Alestorm got here at Hellfest.

Backed by their rubber duck mascot, the band led the crowd with anthems like “we are here to drink your beer” [Drink]. The energy levels are through the roof with a nonstop trail of crowd surfers flying by. They may not be to everyone’s taste, but Alestorm played an absolutely brilliant set today.

Saturday is another scorching hot day, and with temperatures set to pass 40c, all festival-goers are finding every means they can to keep cool, including going for a swim.

Taking to an absolute jam-packed Valley stage, Me And That Man bring their gothic country blues at just the right time. Songs like My Church Is Black and the Dark country of On The Road’ are just the ticket and brilliantly showcase Behemoth frontman Nergal’s ability to sing clean.

Day Two at Hellfest is set to be another scorcher, with temperatures set to hit 39°C by mid-afternoon.

Frank Carter & The Rattlesnakes ripped up Hellfest yesterday. You can read Dany Jones’ report here with photos by the excellent Ya Cheng.

The Dead Daisies will not make their scheduled performance today “due to a couple of us catching the dreaded bug.” Get well soon, Daisies.

Deftones played a masterful set that balanced on a knife-edge between mellow and heavy – a truly brilliant blend of old and new songs too.

Frontman Chino Moreno is in fine voice tonight, and his flowing vocals still have the range of whisper to scream after more than 20 years.

The Offspring come on and, simply put, have almost the entire field of Hellfest dancing, singing and sweating along with every single song. “We know it’s about a million degrees out there,” says guitarist Noodles, “so it means the world to us that you stuck around and joined us.”

Feel good pop-punk anthems like Pretty Fly (For A White Guy) get people singing and moshing along, and the band return for an encore.

That was always going to be a tough act to follow, but Mastodon has never been guys to shy away from a challenge.

Coming on on the dot of 7.45, Georgia’s finest sons certainly work up a sweat. Tearing through a set list packed with songs from their latest album, Hushed And Grim. It’s impossible not to be impressed. While Mastodon doesn’t exactly have a songbook of hits to draw from, they still choose to focus on the harder and faster material rather than sing-along songs. They end with a crushing Blood And Thunder.

Carter is night and day compared to Opeth, who follow on the second main stage. While the Swedes do try their best, prog Metal epics are the last thing any casual rock or Metal fan wants in the middle of a heat wave.

Nevertheless, Opeth does soldier on and does manage to get fists in the air.

His energy levels are absolutely ferocious, and he is clearly a man who takes matters into his own hands. When there’s no circle pit, he promptly jumps into the crowd and makes one, with himself at the centre.

Carter opens up an all-female mosh pit for the ladies to feel safe and then dedicates a lullaby to his daughter.

Rotting Christ takes to the Temple stage to play a masterful set of Black Metal to their devoted fans. The Greek Metal legends clearly have all the experience and the songs to hit this crowd. In a time when most Black Metal has become a poor parody of itself, Rotting Christ are still leading the way with quality musicianship and performance.

“You have a special place in our hearts,” says Sakis Tolis, before addressing the crowd in French.

Norway’s Death Metal legends Cadaver bring their brutal, three-piece sound to the Alter stage. With the blazing sun and temperature climbing, it’s not exactly what the doctor ordered at this time of day, but one has to admire their commitment.

On the main stage, their countrymen Leprous are having a better time of things. With their modern, prog-tinged sound, the band do well with their limited time, like an enticing crossover between Porcupine Tree and Biffy Clyro.

With temperatures set to hit 38°C this afternoon, it’s going to be a hot one by the time Opeth, Mastodon and The Offspring take the main stage.

MetalTalk has teams at Hellfest for both weekends, and you can read all the coverage as the festival progresses.

Hellfest has taken over the supermarkets too, which just goes to show how much the French village of Clisson embraces this event.

The MetalTalk team of Dany Jones, Kahmel Farahani, Ya Cheng and Aggie Anthimidou are en route to Hellfest in the French village of Clisson for this year’s monster edition of festival.

Having not even left Britain, the team got in the mood when they bumped into Frank Carter, who even ended up sitting next to Dany on the plane. 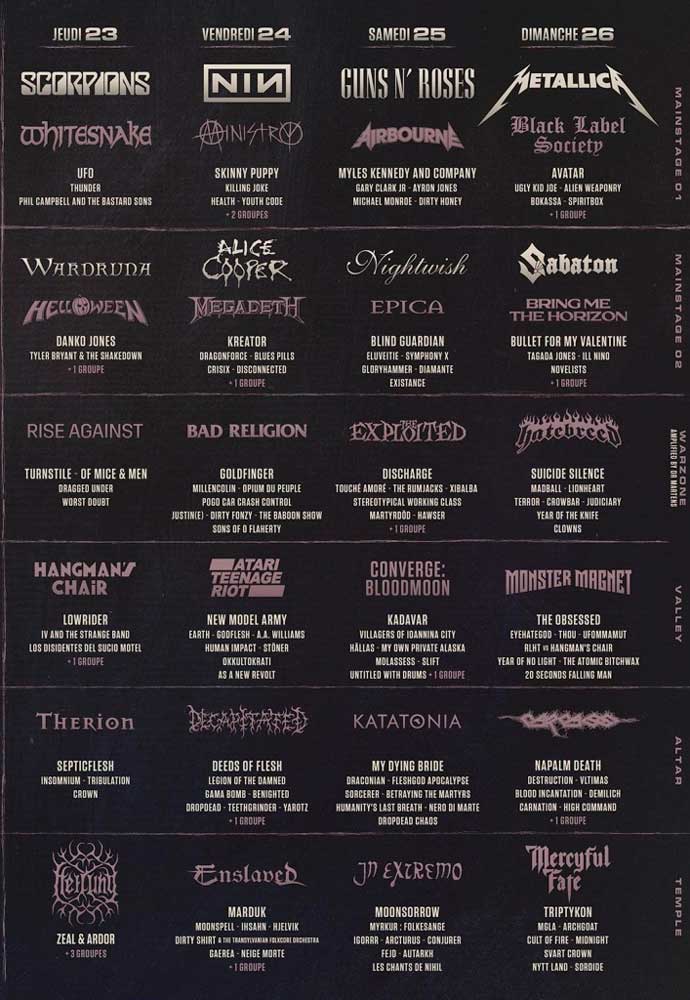