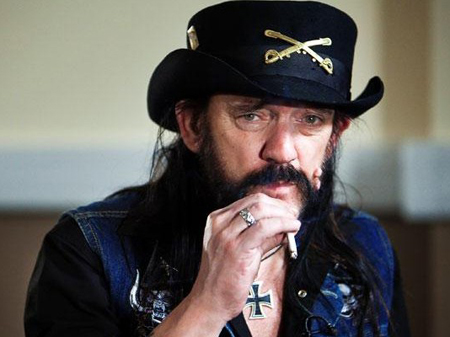 Jim Voxx of Skew Siskin revealed this afternoon on Steve Göldby Talks Metal via TotalRock that he is working on Lemmy’s solo album which he estimates will be released later this year.

In a fascinating conversation, Jim discusses many aspects of his times with Lemmy, some details of the new forthcoming Skew Siskin album which Lemmy appears on, as well as great memories of touring with Motörhead and confirming that he has been working on the live mix from the December 3rd Headcat Lemmy Tribute show.

“We are also in the very last stages of the Lemmy solo album.

“I still don’t know when it will be released because this is in the hands of the Motörhead management and it took a while now but you know, Lemmy had so many things left, there are so many other recordings and they all had to sort out how to proceed and there is no real time rush to release this album so I can imagine it will be towards the end of this year.”

Screenshot from Skew Siskin’s ‘Riding With The Devil’ from 2014

“The songs are composed by Lemmy and when he started with me doing this, that was back in 2003, he didn’t have a real idea what would be on it so he came to me and asked me if I would work with him on this because I was able to provide him the studio time he needed because as you know, always during summer Motörhead was doing festivals here in Europe and he used Berlin as a springboard so he had the time in the summer to be here and work on further tracks.

“He also recorded some tracks in America with Dave Grohl or Reverend Horton Heat, and in London he was working wth The Damned, and all these tracks came to me to Berlin, because I am the producer of the album, and we continued working on this.

“We started out with two Skew Siskin songs and whatever would be next, at that time he didn’t know, because he was just looking round, he wanted to take his time. It was the total opposite of working with Motörhead because he had to do it in his free time between the Motörhead work.

“But I gave him the possibility always to come here and work in the studio whenever he needed and step-by-step we got the songs together and we have ten songs, and we thought it would have been released a long time ago now but when Lemmy got ill, we stopped working on it, but the recordings were all done.”

For the new forthcoming Skew Siskin album, Lemmy also played bass on one song which is done in the style of The Who’s classic phase of 1968-1972 and Jim expands on this in the conversation, including the fine detail of how Lemmy created his solos for this particular track and much more too.

You can listen to the whole conversation right here. The chat with Jim and Nina begins at 22.56 of part two.