It was 1968 when Jazz Sabbath were formed. This young trio quickly rose to the forefront of the then burgeoning jazz scene in London. Their debut album was slated for release on Friday 13th February 1970 until heartbreak stepped in. Founding member and pianist Milton Keanes was hospitalised with a massive heart attack which left him fighting for his life.

The decision was made by the band’s record label, Rusty Bedsprings Records, to shelve the release out of compassion and the financial uncertainty of releasing a debut album from a band without its musical leader.

When Milton was finally released from hospital in September 1970, he found that a young band from Birmingham called Black Sabbath had released 2 albums containing Metal versions of his songs!

After trying to contact the record label, Milton found they had gone bust and the label owner was in jail. All copies of the Jazz Sabbath album that had been pressed were destroyed, when the warehouse containing them had burnt to the ground in a fire that led to the label boss’ imprisonment for insurance fraud. The album master tapes were also thought to have been destroyed in the fire.

Fast forward to late 2019 and a gentleman buys the building that used to house the recording studio where Jazz Sabbath recorded (with plans to convert it into a vegan pet shop). He found some tapes in the basement, which turned out to be the Jazz Sabbath album master tapes, along with some slides that were the original album sleeve. These tapes have now been properly mixed and will finally be heard.

This album will prove that the Heavy Metal band worshipped by millions around the world are in fact nothing more than musical charlatans, thieving their music from a hospitalised genius.

Any truth in the above review is entirely coincidental and no offence or misinterpretation of facts was intentional or even warranted.

The fact that Milton Keanes is actually none other than Adam (son of Rick) Wakeman, ex Black Sabbath and current Ozzy Osbourne keyboard player, is just here-say, rumour and blind conjecture and cannot be proven. Apart from the fact it is true!

If you want to hear 7 songs made famous by those thieving Brummie vagabonds in their original origin, then look no further than Jazz Sabbath by Jazz Sabbath. Never has Heavy Metal been so groovy!! 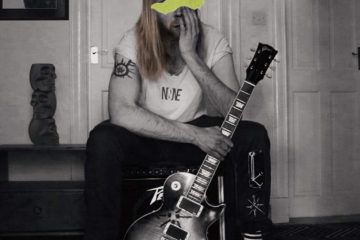