Iron Maiden hit the road in May for a series of arena and festival shows in Europe on the ‘Legacy Of The Beast’ world tour which opens in Tallinn, Estonia on May 26th and finishes at the O2 Arena, London on August 10th and Bruce Dickinson is predicting “social media madness after the first show”.

Bruce told Kerrang! we should expect “an amazing setlist” and “an amazing stage show with lots of surprises and a massive “wow” factor.

The full list of dates are below and tickets are on sale right here.

Kerrang! asked Bruce how this ‘classics’ tour that is tied in with the ‘The Legacy Of The Beast’ game was coming together?

“From my perspective, I haven’t paid too much attention to the game element, to be honest. I’m focused on what’s gonna constitute an amazing setlist, and what’s gonna constitute an amazing stage show. I’m looking at the show as something that should certainly exceed what we did on ‘The Book Of Souls’ tour, and I’m approaching things a slightly different way. I’m approaching some of the songs a slightly different way. I’m conscious that over the years we’ve fallen into a little groove with some songs, so I want to try to shake that groove up a little bit.” 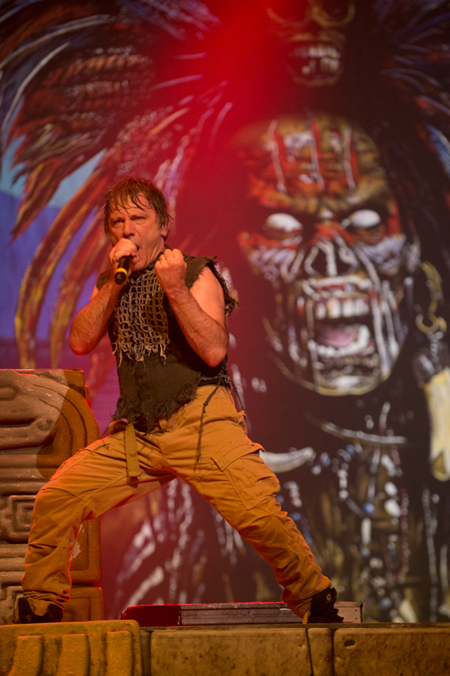 And on whether there is less pressure doing a ‘classics’ tour that creating a setlist with new material for an album tour, Bruce replied:

“It’s different. But when you do a show like we’re planning to do, I want it to be really slick, but awesome. I want people to go, ‘Wow! Fucking hell, you’ve gotta see this show!’ I want people to be surprised as well. I want them to go home going,’Fucking hell, I can’t believe they played that song!’ That’s the reaction I want.

“When you do an album tour, it’s more… you can take time to be a bit goofy with people and for them to digest it and what have you. On ‘The Book Of Souls’ tour there was quite a lot of chatting with the audience. I’m not planning that on this tour because we’ve got so much to do and there’s so much going on. The show and the music is gonna carry the whole bloody thing.

“I’m pretty intimately involved in the show. There’ll be a couple of moments of chat with the audience, but it should be completely self-explanatory what’s going on – the drama should be in the transitions of the stage and the music. And we’re playing one or two things that people are gonna be really surprised by. There’ll be social media madness after the first show.” 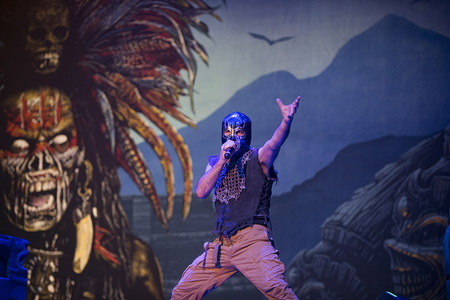 Kerrang! then asked Bruce if he could elaborate on what he had just revealed.

“Not really! We’ve spent ages on it, though. And I’m already walking through it in my mind and going, ‘Where can I input those moments of meaning? To shift people’s perceptions?’ It’s like ‘Climb like a monkey’ – where’s that? That came from seeing someone at the front doing it, and it just became this massive thing! It’s a laugh, why not?”

The ‘Legacy Of The Beast’ tour will be Maiden’s fourth ‘classics’ tour and those who witnessed 2005s Eddie Rips Up The World’ tour, when Maiden played songs from the first four albums only, opening with ‘The Number Of The Beast’, will never forget the magic of those occasions.

The ‘Somewhere Back In Time’ world tour of 2008/09 was nothing short of spectacular as ‘Aces High’, Revelations’, The Rime Of The Ancient Mariner’, ‘Powerslave’ and many more were all re-introduced to the setlist after lengthy absences while the ‘Maiden England’ world tour of 2012 to 2014 saw most of their exceptional 1988 album, ‘Seventh Son Of A Seventh Son’, played live once again.

If this fourth ‘classics’ tour continues the timeline, this year’s setlist will probably include songs from the ‘No Prayer For The Dying’ and ‘Fear Of The Dark’ albums, as well as material from the Blaze era with ‘The Clansman’, ‘Lord Of The Flies’ and ‘Sign Of The Cross’ being the standout picks. The ‘Brave New World’ and ‘Dance Of Death’ albums could be featured too unless the band decide that the next ‘classics’ tour will focus entirely on the five albums they have released since Bruce and Adrian returned in 1999.

Whatever they decide to play, you can rest assured that the ‘Legacy Of The Beast’ tour will be an unforgettable experience. 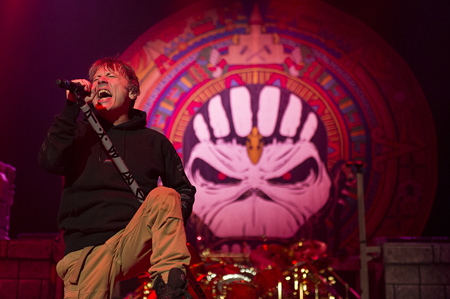 Bruce will be appearing at the London screening of ‘Scream For Me Sarajevo’, the amazing and astonishing story of the most unlikely of rock concerts, performed by Bruce and his band Skunkworks in 1994, in the midst of the Siege of Sarajevo. This is a film about extraordinary people defying the horrors of war, and the musicians who risked their lives to play a show for them.

‘Scream For Me Sarajevo’ will be screened in selected UK cinemas on 17th April 2018. You can see the list of cinemas and snap up your tickets right here. The special London screening takes place and Bruce’s live Q&A takes place on 11th April at Vue Cinema in the West End.

‘Scream For Me Sarajevo’ is based on the MetalTalk writings of Skunkworks bass player Chris Dale and has already won awards at Film Festivals around the world before it’s general release, including three awards at the Sarajevo Film Festival last year (Human Rights Award, Audience Award and Best Documentary Award).

The ‘Legacy Of The Beast’ world tour tickets are on sale right here. This tour is expected to run into 2019 and the dates are:

No further countries will be added to this touring schedule.

‘Iron Maiden: Legacy Of The Beast’ is the name of Maiden’s first ever comic book and this is based on the hugely successful mobile game.

Comprising five fantastic issues, with an overarching narrative and incredible illustrations, ‘Iron Maiden: Legacy Of The Beast’ is written by Llexi Leon and Ian Edginton, with art from Kevin J West, Jason Gorder and Santi Casas. All five issues are now on sale right here.

There are at least three different covers for each of the issues and signed copies and limited editions are available right here. Here’s a selection of the covers. 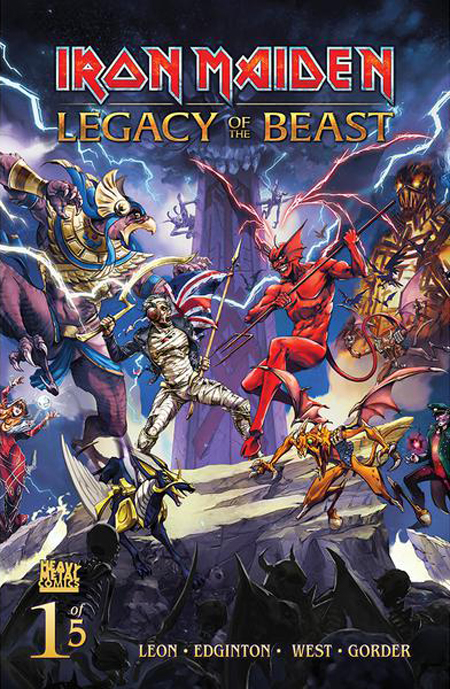 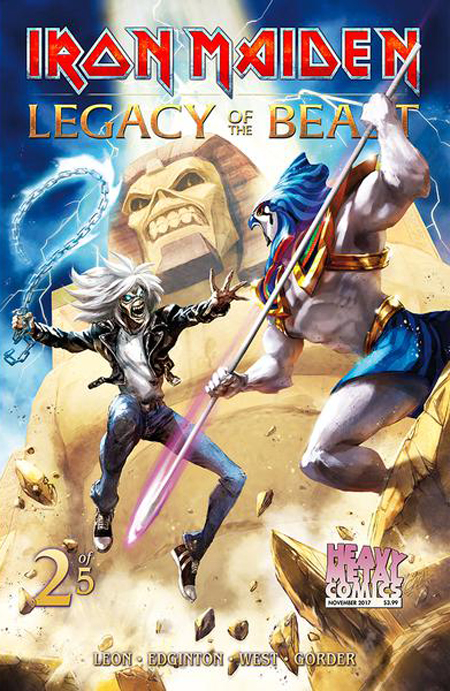 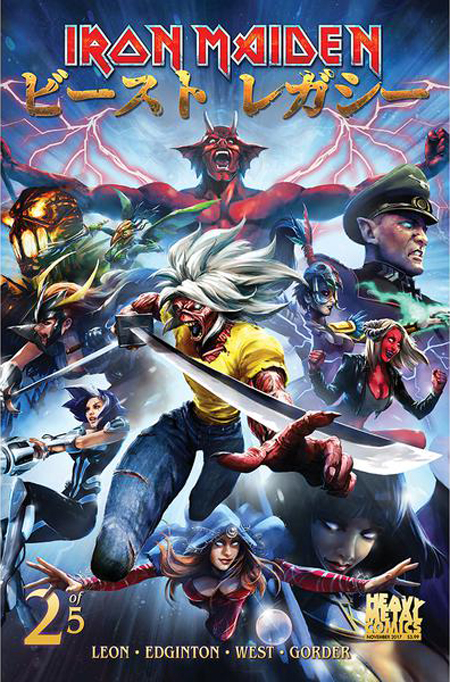 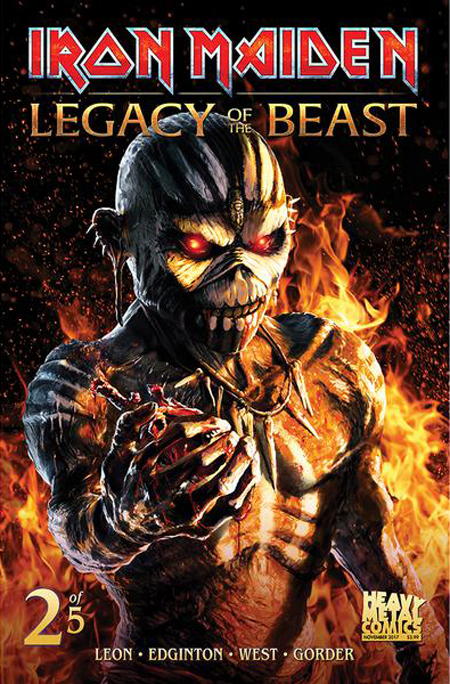 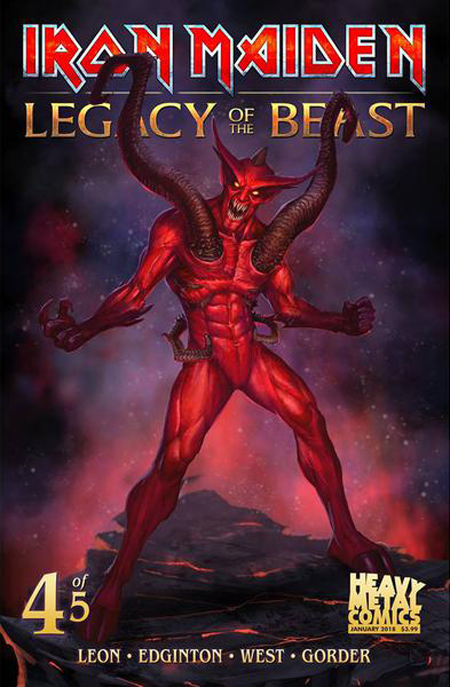 “As a lifelong fan of Iron Maiden, it is a privilege to publish the first official comic giving a narrative to their iconic mascot, Eddie. Heavy Metal’s near half-century-long history of either working with or launching the careers of only the most accomplished artists continues here with the amazing team Iron Maiden has working on this series.”

“After forty years of unbridled creativity, innovation, and attitude, Heavy Metal has always been a home to the greatest talent in sequential storytelling and fantasy art. With a natural affiliation to the heavy music genre, it’s a nexus point for counter culture and alternative arts. I can think of no better partner to explore Iron Maiden’s mythology and expand the ‘Legacy Of The Beast’!” 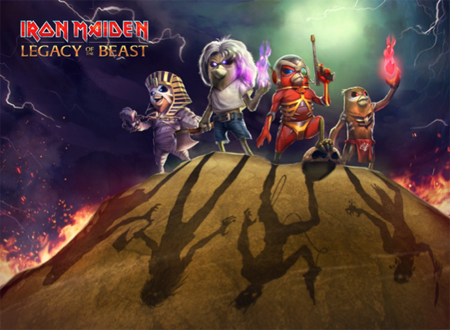 Rovio Entertainment, the creators of Angry Birds – a game series that has been downloaded a whopping four billion times – and Mobile games publisher Nodding Frog have completed the migration of Eddie The Bird from ‘Angry Birds Evolution’ to Maiden’s ‘Legacy Of The Beast’ mobile game. This unprecedented move by Rovio marks a global first for the company, with Eddie The Bird originally appearing in Angry Birds Evolution as a special Halloween tribute to the British Metal legends.

Whilst in Angry Birds Evolution, Eddie The Bird – the feathery version of Maiden’s iconic mascot – evolved through four classic guises from the band’s storied history – Cyborg (‘Somewhere In Time’), Pharaoh (‘Powerslave’), Killers (‘Killers’) and Shaman (‘The Book Of Souls’).

During this time almost twenty million Maiden tracks were heard by hundreds of thousands of players, with a mind blowing thirty-three million minutes worth of Maiden music played in total.

Eddie The Bird will now appear in ‘Legacy Of The Beast’ as all four characters simultaneously, giving players the chance to team multiple birds, as well as deploy them alongside their own greatest allies, with a series of suitably epic events scheduled from the Birds first appearance on February 6th until February 20th, at which point they will fly away and no longer be available in the game.

Check out the trailer right here:

“Rovio outdid themselves with an incredible tribute to Maiden last Halloween and now it’s time for players of our own mobile game to enjoy these fantastic characters within the worlds of Legacy Of The Beast.”

“As huge Metal fans we’re delighted to see our tribute to Iron Maiden continue through into Legacy Of The Beast. Eddie The Bird has been a massive hit in our game and we’re sure that players of Legacy will have just as much fun with him!”

‘Iron Maiden: Legacy Of The Beast’ is available now for free on Apple’s App Store and Google Play. 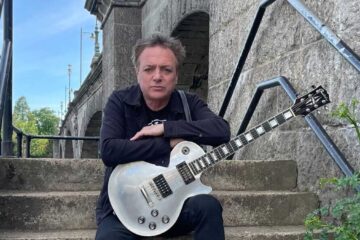