The “Kings of Slam” return with their latest chunk of brutality, ‘Where Only Gods May Tread’. The fifth album from Ingested, the band are now ready to rise from the underground to the wider Metal audience and, whilst the “Kings of Slam” is a self-proclaimed title there are many, including myself, who feel it is a valid one.

Having been blown away by their highly sought after limited edition ‘Revered by No-One, Feared by All’ EP way back in 2013, they have continued to impress me with subsequent studio, as well as live performance,s ever since, building and perfecting on that achievement.

‘Where Only Gods May Tread’ continues in that upward spiral of excellence, weighing in at ten tracks and forty-nine minutes of sophisticatedly constructed Extreme Metal.

They are technically precise and crushingly brutal, this time with a few notable differences line-up wise, with Dom Grimard (Ion Dissonance, The Last Felony) covering bass duties and guest vocal appearances from Kirk Windstein (Crowbar, Down) on ‘Another Breath’, Vincent Bennett (The Acacia Strain) on ‘The Burden of Our Failures’ and Matt Honeycutt (Kublai Khan) on ‘Black Pill’.

For me, one of the many things that sets them above their peers is the range to the vocals, right at the bottom end, deep squeals, but a high degree of highly decipherable growls and vitriolic hisses. This really makes the listen all the more engaging. 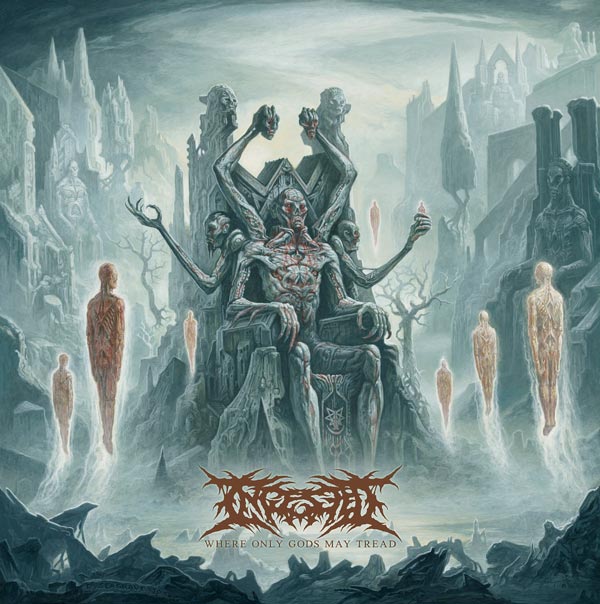 Then there is the exacting way the tracks are paced and punctuated, skilfully embellished by bursts of blistering drum work with a heavy addictive groove to the technically edged guitarwork and brutally slamming hooks. All phrased in such a way as to make it a compellingly convoluted and fascinating listen.

Four singles from this album have been released since April as a foretaste; the incendiary ‘No Half Measures’, the punchily powerful ‘Impending Dominance’, which turns haunting and ominous briefly in the second half.

Third is ‘Another Breath,’ with its haunting build, made more so by the haunting vocal additions from Kirk before expanding out into a dense and intense offering.

My favourite of the four is ‘Dead Seraphic Forms’, with its haunting slightly exotic repeat melody which weaves through most of the track, enhancing the punchy quality rather than detracting, reaching its zenith with an insane mid-point pace.

So, if you have followed and enjoyed those four you certainly will not be disappointed in the rest of the album.

From the punchy, poignant opener ‘Follow the Deceiver’, with its insane screams and manic tempo bursts, all the way through to the crushingly sinister, ominously haunting and lyrically powerful closer ‘Leap of the Faithless’, with its evocative mid-point leadwork.

If I have to pick a favourite track, then it would be the dark evocative ‘The Burden of Our Failures’. Slower in pace, but still powerful, with haunting second half leadwork and thought provoking lyrics and a little different form the others.

But in all honesty, it is a hard choice to make.

‘Where Only Gods May Tread’ is out on Unique Leader on 14 August and, whilst you may not be able to see them live at the moment, at least you can console yourself with this brutally superb album.

MTTV Episode Fifteen: Rudy Sarzo on the importance of mentors, plus Monsters '90 news