In MTTV Episode Fifteen, MetalTalk spoke with the ‘Bass Wizard’ Rudy Sarzo, who has played with many of the greats in his time. Rudy talks about Ozzy and Randy Rhoads, touring with Dio, joining Whitesnake and why Quiet Riot was supposed to fail.

Rudy, on Lockdown and playing with The Guess Who:

“I’m one of those guys that don’t really go out and socialize that much… now I’m with The Guess Who and we only play weekend shows by choice. We’re not really set up for a three month run on a tour bus.”

On his Signature Sawtooth bass guitar:

“With Sawtooth I basically started designing guitar bags that would be universal…then they asked me to design a signature bass with them. I already have my signature Spectre bass so I decided to do a new original design.

“I owned some other acoustic basses and they always fell a little short so I wanted it to feel like an electric bass but sound acoustic.”

“40 years on it feels like a miracle! But it happened at the right time. Sometimes you can find peace with God and the universe at your lowest points and that is probably the most important moment that the door opens up into a new era.

On touring with Ozzy and playing with Randy Rhoads:

“About 90% of what I know about the music industry I learned on that tour with Ozzy and Randy too because he mentored me.

On the ‘Talk of the Devil’ live album:

“It was a long build up and it went through phases and it was supposed to be a different show.

“Randy didn’t want to be a part of it, but right before he passed away he agreed to do it with some conditions. People still wonder why there aren’t more videos of Randy playing. Well we had planned to!

“The fact that Sharon Osbourne told us there were not going to be overdubs gave us a new focus.”

On greatness and playing with Dio:

“When you go on stage with greatness every night you can get a bit spoiled because you think ‘this is just what I do’.

“Playing with Ronnie James Dio was one of those things. It’s a greatness based on a legacy. He opened up his heart every night.

“Once they’re gone you can spend the rest of your life trying to find it again, but you should not punish yourself trying to find a once in a lifetime, like a Randy Rhoads or a Dio again.”

On Quiet Riot and ‘Metal Health’:

“I think when you do something honestly, the audience just gets it. The record label at the time wanted so many compromises from us, they even wanted us to cut our hair.

“They had no clue about the new wave of Metal that was in their own back yard.

“In fact I’ve heard a reliable rumour that Epic chose to put out the ‘Metal Health’ album because they thought it would flop and they wanted out of the distribution deal they had!

“But things came together in a way nobody could have imagined and by November 1983 we made it to number one and beat ‘Thriller’ to do it!

“Nobody thought that band was going to accomplish anything.”

On supporting Judas Priest in 1983:

“Great band, great people. Their audience really embraced us but the toughest thing about opening for Priest was that they were a precision machine and every night was spectacular.

“You have to rise to that level, or at least aspire to it ! You’re only given that one chance every city.”

“I had already become familiar with them because Whitesnake had gone on tour opening for Quiet Riot in 1984.

“The plain fact is there was a tension I noticed between John Sykes and David Coverdale.

“I wasn’t about to leave one situation to join another. Once the 1987 album was finished and it was just David, I felt safe to get into that situation.”

On giving back and tutoring young musicians:

“There are so many opportunities to give back to the music community and I’ve been blessed to be involved with some of the all time best. Now I love to give back and share what I learned from the best.

“These days record companies are just not involved anymore and musicians are left to create their own art.”

All photography in this episode is from the internationally famous photographer Mark ‘Weissguy’ Weiss, author of the new book ‘The Decade That Rocked: The Music and Mayhem of ’80s Rock and Metal’.

To mark the 30th Anniversary of Whitesnakes second headline performance at Monsters of Rock in 1990, Whitesnake will be streaming their ‘Live At Donington’ concert film on YouTube this coming Tuesday (18th August).

Before the broadcast, there will be an on-camera pre-show Q&A (7.30pm UK time) with the 1990 line-up of Whitesnake, including Rudy Sarzo.

David Coverdale tells us: “I can’t wait to be reunited with Steve, Adrian, Rudy and Tommy, even if it’s just for this online moment.

“They were without a doubt one of the best, most explosive, exciting musical collectives I’ve ever had the pleasure of sharing a global stage with…super people, super musicians…an absolute SUPERGROUP!!!”

Oliver Wakeman / Bedtime stories and making giant footsteps of your own

George Lynch: “The best that Dokken ever was, was on the Aerosmith tour”

MTTV: Jeff Plate / “It was such a thrill to join Savatage” 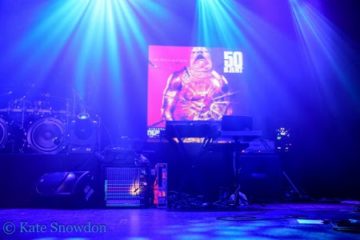