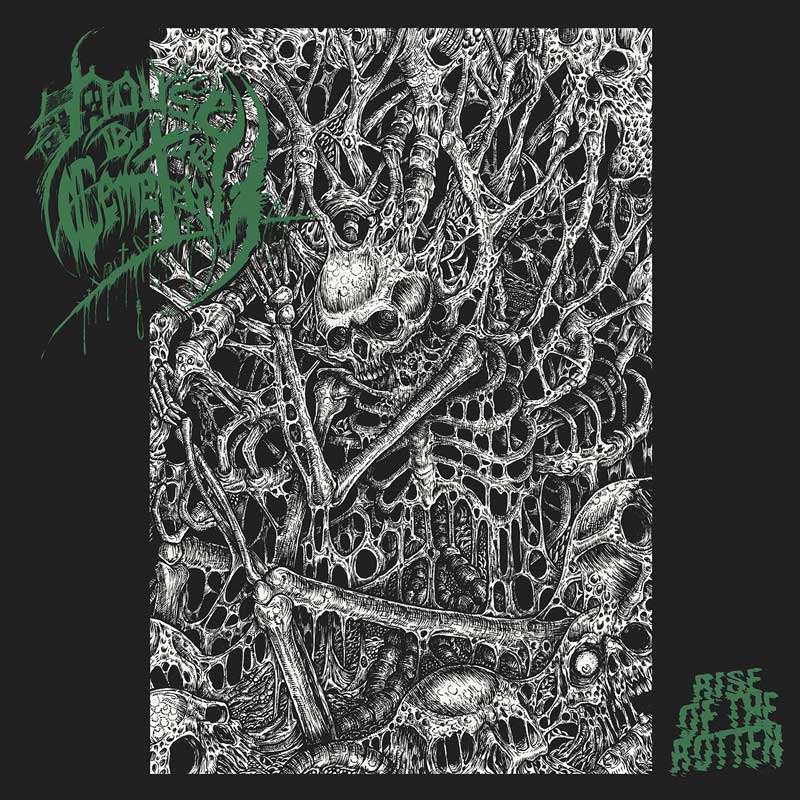 Death Metal overlord Rogga Johansson is back again with yet another project. Known as House By The Cemetary (sic), this time Rogga is collaborating with Monstrosity frontman Mike Hrubovcak, with added drum battery from Paganizer drummer Matthias Fiebig.

House By The Cemetary – Rise Of The Rotten (Pulverised Records)

Their debut release ‘Rise Of The Rotten’, along with the band name, are both a homage to the Fulci-directed cult horror film from 1981, ‘The House By The Cemetery’ which was in it’s own turn a homage to the work of Lovecraft. Fulci wanted to make a film inspired by, rather than based on his work, and much of Rogga’s work, as fans will know, often has a Lovecraftian influence.

‘Rise Of The Rotten’ is a compact offering. Nine tracks spanning just thirty minutes, but what a thirty minutes it is, crammed with filthy, raw and rugged Swedish Death Metal of the finest calibre. House By The Cemetary (sic) have immediately implanted themselves in my top five Rogga projects with this album.

Opening on title track ‘Rise Of The Rotten’, immediately you know it is Rogga. If you listen to enough of his music, you will immediately spot his trademark style. He is straight in with a dirty, fuzzy riff that has an addictive groove which immediately grabs your ear. Then, the opening roar of “Rise!!” from Mike and that’s it, totally hooked and it only took six seconds.

Vocally this album is superb. From the hollow ground shaking rasp, to the higher vitriolic growl of Mike’s delivery, he complements the riffs perfectly.

Each track is linked to the other by the way Rogga has, once again, taken a riff idea and manipulated it into different forms which pop up across the release, so even though every track is different, there is also that commonality as a constant, binding everything together.

I do not have a favourite track. This is a great album end to end, but there are a few moments that draw me in further. The wonderful dirty groove to opener ‘Rise Of The Rotten’, the playful groove alongside the sinister undertone on ‘Into The Murky Depths’, the chunk of insane leadwork midway into the second half of ‘Crematory Whore’ and I love the haunting melody that pops up repeatedly on ‘Eaten By The Horrid’.

Lyrically this album is hugely engaging, particularly ‘The Wretched One’. I love the lyrics here, delivered with extra vitriolic intent, particularly the repeat line “You wretched waste of life.”

It is well worth your attention.

‘Rise Of The Rotten’ is available from PHD, Soulfood and bandcamp.com/album/rise-of-the-rotten