Polish Extreme Cult Metal legends Hell-Born return with their first album in twelve years, ‘Natas Liah’, a wittily playful ‘Hail Satan’ backwards, which the band believes is “by far the best album in their career”, a comment you will not find me arguing over!

If, those of you not fully acquainted with Hell-Born, think that some elements of their sound feels reminiscent of Behemoth, that is because they were founded back in 1996 by Behemoth co-founder Baal along with another former Behemoth member Les. For those who are familiar, you can expect business as usual… and more.

Speaking of Behemoth, ‘Blakk Metal’, the final offering of this release and a dark driving beast of a track with its haunting swathe of closing lead work, features guest vocals from Adam “Nergal” Darski. 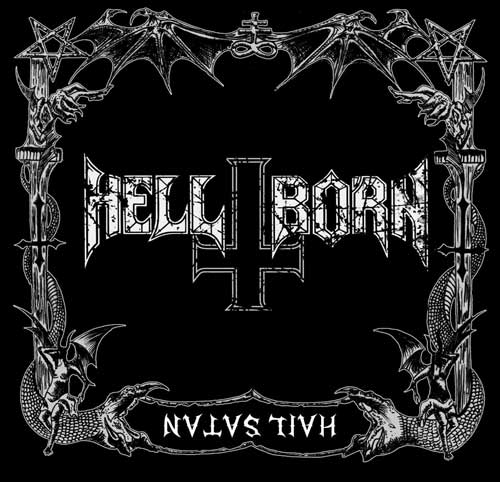 ‘Natas Liah’ also boasts two other guest appearances; Jacek Langowski of Holy Smoke delivers some superb soaring, haunting lead work on ‘Uroboros’ and the dark, sinister and bleakly oppressive ‘The Butcher’ has guest guitar work from former Hell-Born member Jacek “Jeff” Kubiak, who delivers a swathe of soaring leadwork that spirals out of the gloomy darkness.

What you can expect across the duration of ‘Natas Liah’ is that familiar old school, very blackened Death Metal with just enough melody to engage and enough brutality to split Hell asunder, right from the opener the thunderously engaging ‘When You Are God’ all the way through to the previously mentioned closer ‘Blakk Metal’.

The twelve year wait certainly has not affected their ability to deliver. The last Hell-Born release, ‘Darkness’ back in 2008, was a good album, but they have returned with a new found vitality and brutality. From the acerbic quality of Baal’s growls to the determined drive of the riffing and the vigorous precision of the drum work, everything has a renewed and refreshed feel that makes an equally invigorating listen.

Each track brings a new and different brutal delight to your ear.

Tracks like ‘Axis of Decay’, which is packed with a punch and drive made engaging with a hypnotic repeat that ties the whole track together. ‘Ye Olde Woods Devil’ is filled with haunting intense blackened repeat riffs that mingle and entwine with the acerbic growls.

The driving, precisely paced ‘Son of Earth’, with its superbly sinister vocal delivery and hauntingly spectral guitar work in the second half , and the dark sinisterly haunting ‘In God’s Death’ and ‘Soulrape’ with its punchy drive.

These all add up to deliver end to end excellence.

‘Natas Liah’ was recorded at Creme de la Creme studio and Haldor Grunberg, known for his collaboration with Behemoth, handled the mixing and mastering.

It is available as a six panel digi pack with a 16 page booklet, as a gatefold 180gm with poster A3, black LP (limited to 234 copies) and die hard version (white LP with a patch and sticker, limited to 66 copies) from: odiumrex.com/webshop