‘The Future Bites’ has definitely taken it’s time to get here. Originally slated for release in June 2020, the sadly ongoing Covid pandemic saw the release being pushed back to now and the planned tour (which would have seen Wilson headline arenas) was postponed until (hopefully) October 2021.

The first single to drop from the album, ‘Personal Shopper’, was released in March 2020 for the planned June 2020 release, which obviously did not materialise.

The shockwaves that hit the Steven Wilson fanbase when they heard ‘Personal Shopper’ were massive.

The track is a 9 minute 45 second ode to consumerism. So far, so neo-prog. The biggest fly in that ointment was the fact that ‘Personal Shopper’ is, for the most part, a dance track. Some fans threw their toys out of the pram, even going so far as to accuse Wilson of the very thing that ‘Personal Shopper’ was about – selling out and crass commercialism.

If they had taken the time to actually listen to the track, they would have found that it IS a neo-prog track – just done in a different way. Wilson said himself back in March 2020 that ‘Personal Shopper’ makes a lot of sense in the album from which it was taken and he is not wrong.

‘The Future Bites’ is an incredible piece of art from an artist who point blank refuses to tread water. I say it is a piece of art rather than an album for good reason.

There has been a very considered campaign leading up to the release of this album – an online The Future Bites store selling / not selling weird items (can of air – sold out, a single roll of toilet paper – £200), a slogan heavy advertising campaign all done on a stark white background with bold black lettering.

The promo videos for the tracks that have been released so far – ‘Eminent Sleaze’, ‘King Ghost’ and the aforementioned ‘Personal Shopper’ have all been jaw dropping. Make no mistake, Steven Wilson wants this album to do well.

The album opens with the one minute five second ‘Unself’, which sounds like a demo recording. A soft strummed acoustic guitar with Wilson’s unmistakeable vocal over the top. This then segues into ‘Self’ with it’s driving drum intro which leads into a lyric concerning selfishness, complete with glorious female backing vocals. So far, so Steven Wilson.

The first big left turn comes with ‘King Ghost’, with it’s drum machine beat and keyboard heavy riff. This is in the same musical envelope as Portishead and it is delightful. The accompanying Jess Cope animated video is staggering.

Then there is the Coldplay-esque pop of ’12 Things I Forgot’ with it’s real drums, acoustic guitar and piano backing over a lyric about relationships and self image. Think of this as a modern day “Lazarus” and you are almost there.

‘Eminent Sleaze’ is a glorious slice of electronica with a dirty beat. Wilson must have had a ball playing the unsavoury protagonist in the video. This track would not be out of place on a Roger Waters solo album. It has more than a passing resemblance to the great man’s work – beautiful female vocals counterpointing Wilson’s own vocal, a dirty treated guitar solo near the end.

It is the type of song that has you saying “Wow” when it is over.

The soft ballad ‘Man Of The People’ follows and is simply one of the most beautiful songs that Steven Wilson has written, and he has written some crackers in his time.

Next we have the track that started all this off back in March 2020 – ‘Personal Shopper’. A spooky electronic thrum leads us into Wilson’s falsetto, then it kicks in properly with a fantastic dance beat. Wilson leaves the choruses to his female backing vocalists.

If you do not get the obvious irony of “buy the box set and the kind of stuff you’ve bought a million times, buy in green buy in blue buy in patterns ‘cause i tell you to” then why are you even here?

The coup de gras is the inclusion of world renowned consumer Sir Elton John narrating a shopping list of mainly useless products during the song’s mid section breakdown. What Wilson has done with ‘Personal Shopper’ is to create a whole new genre of music – neo prog edm!

He would hate that, as he hates all music genre classification.

‘Follower’ is a straight up Pop Rock song with a proper drum beat and guitar riff. It certainly gets your toe tapping and you find yourself smiling when the ultra distorted guitar solo kicks in, which is followed by a middle eight that could have been Sparks in their heyday.

‘Count Of Unease’ is your typical downbeat Steven Wilson album closer and is all the more beautiful for it.

There we have it – ‘The Future Bites’ is most definitely a “proper” Steven Wilson album. Hiding beneath some of the tracks more jolly sounding music is Wilson’s trademark gloomy look at the world in which he finds himself in.

To those fickle fans that have abandoned him after hearing the predominately electronic sounding singles, then it is their loss. 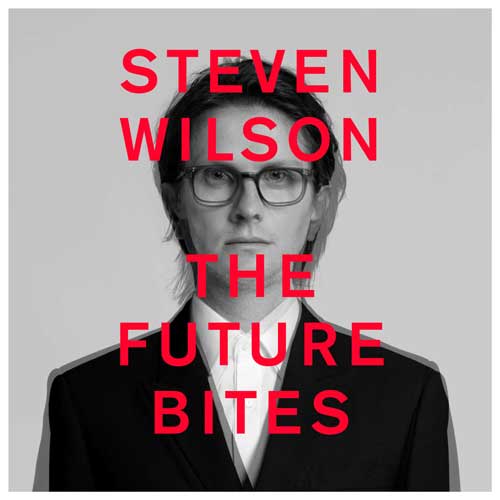 ‘The Future Bites’ is Wilson’s most “now” sounding album, with nine and a bit tracks, clocking in at a tad under 42 minutes. It is possibly one of his best.

He is even playing with us with the album cover. What looks like a portrait of the man himself, is actually a female model made to look like him. Things are not always what they seem to be. I love that.

A final word on the production, by Wilson and David Kosten – it is ASTONISHING.

Do your ears a favour and listen to this album with proper headphones.

The results are staggering.

Hell-Born / 'Natas Liah' is an end to end brutal delight