Diamond Head have today released the video for their track ‘No Remorse’, a cover of the Metallica track which will appear on the re-recording of their debut album ‘Lightning To The Nations’.

‘Lightning To The Nations 2020’, which will be released 27 November 2020, works so well because it does not come across as a cash grab, a righting of creative wrongs, or anything of that sort.

With ‘No Remorse’, it is fitting that Diamond Head chose a song off the Metallica 1983 debut album ‘Kill Em All’, an album that pays homage to their own catalog in many ways. Metallica always acknowledged the early influence Diamond Head had on them.

It is hard to imagine Metallica founding members James Hetfield and especially Lars Ulrich, who once followed Diamond Head on the road before returning to America to form his band, not listening to this cover and smiling ear to ear.

MetalTalk understands that Brian Tatler sent the track to Lars, who loved it saying “It has come full circle.”

“Partly because Metallica covered songs from Diamond Head’s debut album Lightning To The Nations and it felt like things have come full-circle to me. None of the band members knew how to play any of the songs from Kill ‘Em All and I eventually decided we should all learn ‘No Remorse’.

“Then when we got into the rehearsal room, we played ‘No Remorse’ and immediately it just sounded great, it was very Diamond Head and it really suited us as a band.

“Of the four covers we ended up doing, ‘No Remorse’ sounded the best straight away.

“I’ve seen Metallica live over twenty times and they do not play ‘No Remorse’ very often, but it’s always great when they do!”

Rasmus Bom Andersen said: “Of all the four covers, we almost didn’t have to work on ‘No Remorse’

“We all had to learn the parts, and it’s very difficult to play, but in rehearsal it did sound fantastic and we thought: “yeah, yeah, it’s gonna be mega”.

“It was almost surreal when we did it because it just felt incredibly familiar.” 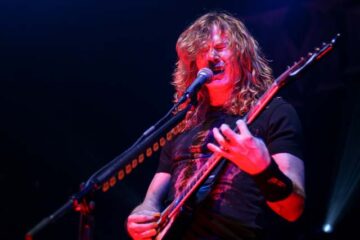