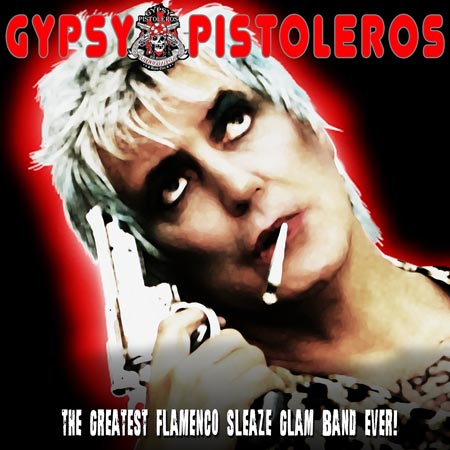 It has been a few years since I last heard of Gypsy Pistoleros. Earlier in the millennium they seemed to be everywhere and once heard they were hard to forget, being a fairly unique proposition: An English band playing a Sleaze Rock – Flamenco crossover.

Eight years on from previous compilation (‘Forever Wild, Beautiful & Damned: Greatest Hits Volume 1’) is this new compilation, which appears to repeat some of the selections, but with a good portion of different songs too.

Although, it is a little difficult to tell, as the Pistoleros have a tendency to switch between the English and Spanish languages, so ‘Moonchild’ on ‘Forever Wild…’ is presented here as ‘Chica De La Luna’, which translates as the same thing and seems to be the same song (a little frustrating if you are researching the back catalogue – and if you are short on patience, it might make you wish they would just compromise and do the lot in Esperanto).

But how does it sound?

Well, once again we have a fun, vivid and intriguing collection culled from the band’s career to date.

And it is an impressive career, spanning numerous big festival dates in the USA and support/’special guest’ slots with many legends of the 1980s punk, glam and sleaze scene.

Deeper into the collection ‘Wild, Beautiful, Damned’ also still hits the spot, an energetic singalong with many hooks and dynamic structure. ‘Livin’ Down With the Gypsies’ too….in fact there is much here to enjoy.

On paper, they are something of a marketing manager’s dream, when you think about the potential for such a crossover in Europe and the Americas. If they’d been around a few years earlier and landed a place on the soundtrack to any big Tarantino movie such as Desperado or Dusk Til Dawn, you would surely have heard a lot more of them by now.

However, outside of playing a handful of big festivals in the US they have remained something of a niche act, in the UK at least.

Sure, there is potential for ‘novelty act’, but honestly the majority of material here transcends that quite easily and stands proud on the quality of production and performance.

The band play with conviction and a good sense of melody as well as power and the brass and flamenco influences add to the dynamics of the music.

It still sounds as fresh today as it did back in 2012.

The cover versions of Ricky Martin’s ‘Livin La Vida Loca’ and Cher’s ‘Gypsy’s Tramps & Thieves’ perhaps veer close to the edge of the metaphorical novelty cliff, but San Francisco glam originals Vain used to cover the latter in the late 80’s, so you could argue they are just being authentic to their influences.

If you are yet to check out Gypsy Pistoleros, then this is a good place to begin.

Turn it up and join the fun.