‘One In A Million’ is the new album from the Gary Summers Band, a London based Melodic Rock outfit fronted by Gary Summers and backed by members from Praying Mantis, Heavy Metal Kids, Rococo and Gary Moore.

Summers has been on the live music scene for a number of years, including most recently as bassist with legendary Gillan drummer Mick Underwood and, most recently, supporting Whitesnake rockers Snakecharmer.

Recently released, ‘One In A Million’ is a great mix of guitar based tracks, packed full of great melodies and with the style of vocal harmonies associated with many the Classic Rock greats. 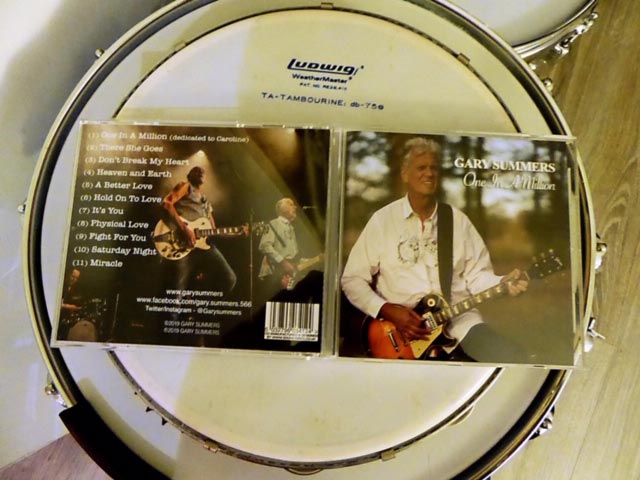 It has been a difficult time for most musicians in this current climate and the bands plans for the album launch party and subsequent tour were shelved due to COVID-19.

Gary told MetalTalk: “Unfortunately, tour dates have yet to be rescheduled owing to lockdown. The album launch scheduled for 10 April earlier this year at the Cavern, Raynes Park, London was cancelled for that very same reason.

“A lot will depend on venues and their ability to keep live music going that haven’t been impacted financially. Tour dates will also depend on the availability of the quality musicians that played on the album as they all have commitments with their own bands such as Praying Mantis, Heavy Metal Kids etc.

“We would all love to tour the album but right now its difficult to say how that can be achieved in the current circumstances.”

You would suspect that live, given the quality of musicians and the level of songwriting on offer, the band would shine. Album opener ‘One In A Million’, which you can watch below, sucks you into the style of the album and is complete with a great sing-along crowd participation ‘Whoooo’ chorus.

‘Heaven and Earth’ is the albums beautifully crafted Hard Rock ballad, which rolls smoothly into a classic Melodic Rock guitar solo and would make for a great single.

The pace of ‘A Better Love’ stomps along superbly, with great harmonies in that Classic Rock style and another masterful Melodic Rock guitar solo. With ‘Miracle’, you have another stand out track. A sweet acoustic guitar and vocals only track, it is a lighters in the air moment.

While only picking out four tracks here, the album is a belter as a whole piece, the sort well suited for these ‘summer evening beers in the garden’ moments and fans of Melodic Rock are recommended to check this album out.

With luminaries such as Tino Troy (Praying Mantis), Keith Boyce (Heavy Metal Kids), Roy Shipston (Rococo) and Vic Martin (Gary Moore) supporting Gary Summers on the album, you can straight away notice the quality on offer.

Finishing up with a message to fans, Gary tells MetalTalk: “I would like to say to the fans, please come and support us at the rescheduled album launch planned for next year (coronavirus permitting) and any subsequent support dates and please keep an eye on the Gary Summers Facebook page for updates and new releases.

“If you like 70’s and 80’s powerful Melodic Rock with strong harmony guitars and vocals, you will love this.”

Videos for One in a Million and There She Goes are available to stream on YouTube and facebook.

Track Listing
One in a million
There she goes
Don’t break my heart
Heaven and earth
A better love
Hold on love
Its you
Physical love
Fight for you
Saturday night
Miracle
Tags:Gary Summers
1
Shares
Facebook Twitter Pinterest WhatsApp
Previous post