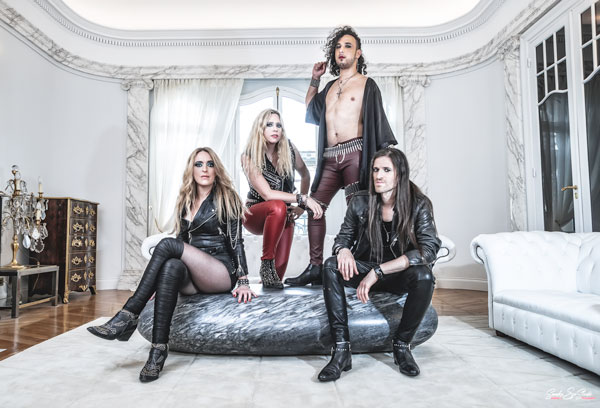 Shaped with the efficiency of Hard Rock, the power of Heavy Metal and the spirit of Thrash, French band Furies release their debut album, ‘Fortune’s Gate’, this Friday (16 October) and as debut albums go, this is a spectacular beast.

Formed in 2013, Furies were originally an all girl band, but Zaza Bathory (drums) adjusted the line up in 2015, with Lynda Basstarde (vocals and bass) joining, and again in 2016 with the addition of left hand and right guitar pair Billy Lazer and Sam Flash.

And listening to ‘Fortune’s Gate’ you have to say the changes have worked a treat.

With Heavy riffing from the outset, on ‘You And I’, the vocals of Basstarde really suck you in with their clarity, pitch and sheer power. The guitars are intricate and skilled, with pin point accuracy, especially during the outro solos:

‘Antidote’ is a further stand out track, sung in French, allowing Lynda to spit out another excellent vocals performance. This track, like the others on the album, is superbly complex enough to make each track a great journey. And that high pitch vocal ending is totally impressive; Think Ann Wilson of Heart, but punchier and more powerful.

Romping through tracks like title track ‘Fortune’s Gate’, ‘Voodoo Chains’ (see below) and ‘Unleash The Furies’ is a joy, with the latter being an exceptional Melodic Thrash Metal gem.

The band released a demo in 2017, titled ‘Unleash the Furies’, which saw live performances on Canal + TV and a recorded session with the radio station France Inter.

With an album of this quality though, ‘Fortune’s Gate’ is sure to help propel the band up to the next level and to be able to catch them live would be a breathtaking experience.

MetalTalk spoke with Furies vocalist and bassist Lynda Basstarde, to find out more about their journey to their first full album release and Metal in France.

Where are you based in France and what was the Metal scene like, before lockdown?

“We are from Paris and the suburbs. Here in France, Metal bands are more in the style of Extreme Metal, like Death Metal and Black Metal, also Modern Metal bands (Djent) by younger musicians with only few Heavy Metal bands.

“You have plenty of Metal gigs in every city in big and small venues and outdoor festivals including the Hellfest festival.

“Metal and Rock bars, they exist but sometimes, they close within two or three years. In Paris, such a big city, you can find only four or five Metal bars.”

When did you start recording the album. How did it come together? Is it a collaborative things between whole band?

“We started recording this album about one year ago, at the Labomatic Studio by Igor Moreno here in Paris for the drums, the bass and the voice.

“Guitars were home recorded by one of our guitarist Sam Flash. All of it was mixed and mastered at the Domination Studio in Italy, by Simone Mularoni (from DGM band).” 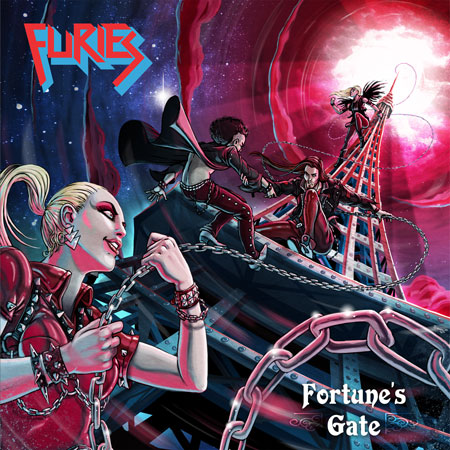 “Our whole album was ready and then the pandemic arrived, so it wasn’t too difficult for us. But, we had great difficulties shooting our video, because everything was closing, including the studio we booked in an audiovisual school. So, we had to shoot it in a hangar we found at the last minute and we even didn’t use the whole video equipment we rented!

“Otherwise, the planning for the release was a bit postponed.”

What does the future hold for promotion? Things are still difficult in France? Are there any socially distanced gigs planned?

“Due to COVID-19, things are still difficult in France for gigs. They allow some big gatherings like a medieval show, for example or Disney Land and cancel almost all gigs, even small outdoor festivals like the Mennecy Festival.

“People from the entertainment world don’t understand. We have gigs planned in October and a release party in November and they are not cancelled at the moment, so let’s see what happens.”

Will we see you in London or other parts of Europe next year? Any touring planned?

“Yes of course! Our shows in Sweden (Muskle Rock Festival), Danemark and Germany are postponed for 2021.

“We are looking foward to book gigs abroad and would be very happy to play in London yes!

“Don’t hesitate to tell us if you know good venues ;)”