Texas is not always sunny, in fact it can be decidedly frosty, especially if you are within a five-mile radius of Texan Death Metal quintet Frozen Soul, as their debut studio full length ‘Crypt of Ice’ is a decidedly chilly offering.

Frontman Chad Green told MetalTalk: “The feeling I am getting from playing in Frozen Soul is powerful in a way I was not getting from other bands I have played in before. The sound, the lyrics, even the logo itself has a harshness to it that just feels powerful and cold.

“Add to that the depression of dealing with real life and the venomous people that can inhabit it and the vibe of the band just makes sense.”

They formed after a chance meeting in 2016 between Chad and guitarist Michael Munday at a local comic book shop over a game of Magic: The Gathering, which laid the foundation for Frozen Soul.

Their shared love of games and music, especially Bolt Thrower, became the primordial ooze from which Frozen Soul would eventually emerge. “It all started when we were trying to rekindle our former band End Times. We were writing riffs that were a little too heavy for what End Times was going for,” recalls Chad.

“The first full song that we wrote for Frozen Soul was ‘Hand of Vengeance’, which came together quickly! It had a different sort of influence and pushed us to do something new which became Frozen Soul.”

Needless to say, ‘Crypt of Ice’ is a dense and intense chunk of icy old school Death Metal, awash with slow grinding riffs with a strong flavour of the likes of Obituary, Mortician and Bolt Thrower.

Consisting of ten chunky tracks, spanning thirty-nine minutes, they began recording back in March 2020, but not even the encroaching COVID-19 pandemic could halt it. So kudos to the band for completing the album, because the result is a seriously tasty listen that old school fans are going to love.

Back in 2019 Frozen Soul released a demo ‘Encased in Ice’, the three original tracks from that cassette, ‘Encased in Ice’, ‘Hand of Vengeance’ and ‘Merciless’ have been re-recorded to a higher standard and included in this album.

From the opening title track ‘Crypt of Ice’, the whole thing is like a frost covered, unstoppable juggernaut that moves slowly but unrelentingly all the way to the sinister atmospheric closer ‘Gravedigger’.

One of the things I like is the way the vocals are set back in the sound. It draws you in, as well as adding a lot of icy atmosphere, with just enough clarity to the cold rasping growl to send a chill down your spine.

Especially when faced with lyrics such as these, extracted from the ominous and sinister ‘Wraith of Death’:

And the delivery, vocally, is exceptional too and is superbly phrased and intonated for maximum impact. 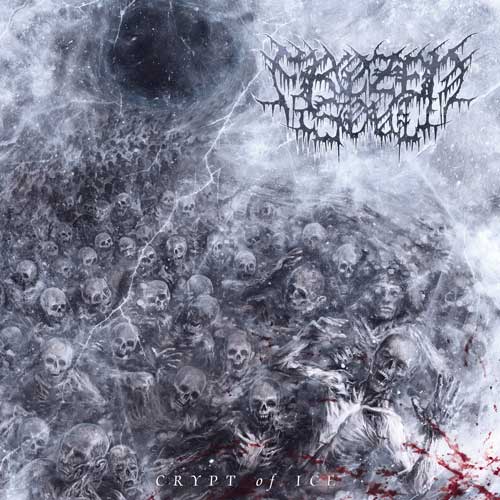 Although ‘Crypt of Ice’ makes a great end to end listen, there are a couple of tracks which stood out a little more for me for subtle reasons; on ‘Arctic Stranglehold’, I love the hypnotic ebb and flow to the riffs and the merest suggestion of a Bolt Thrower nod.

As well as the previously mentioned ‘Wraith of Death’, ‘Encased in Ice’ has a superbly protracted build, slow and sinister to start, moving to a slightly groovy addictive riff before ramping up to a cold and brutal drive, ebbing back slightly for a humorous sound-bite before building once again with sinister intent and vocals that deliver like an icy wind.

I also love the riffs on ‘Faceless Enemy’, a seemingly simple but effective hypnotic rise and fall that is hugely impacting and ear catching.

‘Crypt of Ice’ is out on Century Media Records on the 8 January.

MARIO MAGLIERI, KING OF THE SUNSET STRIP, HAS PASSED AWAY AGED 93