Adding to their discography of five studio full lengths (as well as several demos, splits and compilations), Polish Avantgarde-Black Metal quartet Mord’A’Stigmata have now released a live album, ‘Songs for the Exiles (Live At Roadburn 2019)’. Recorded at the Dutch festival in Tilburg last April, who would have known eleven months ago that this would be an poignant anthem for all the globally self-isolated exiles. 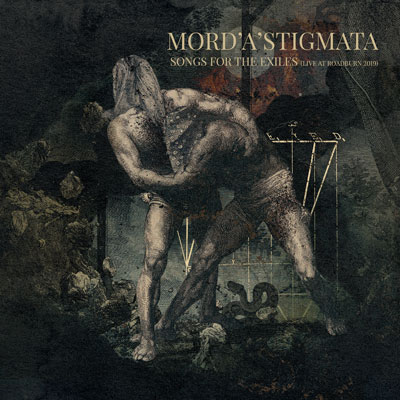 Sound wise the whole release translates well to the live arena. Mord’A’Stigmata have consistently proven they have the ability to deliver live. The quality of this recording is excellent, delivering that extra punch to the sound that you would expect from a live performance and maintaining enough live atmosphere whilst removing any dirty interference.

Fans of their studio work will find this an excellent listen and it is also a great selection of tracks for anyone unfamiliar with their work to acquaint themselves with.

In many ways I prefer this album to their studio work, as it sounds larger and less restrained. For example, the opening industrialised synth segment that begins ‘Spirit Into Cristal’ is utterly mind dominating and exhilaratingly impactful on the live version compared to the studio version.

If you turn it up loud enough and close your eyes you get a sensation of being there, all the better in these isolating times especially if, like me, live events are somewhat of a life force for you. Vocally it is all the more impactful, with much more gravelly vitriol in the live delivery.

The album was mixed and mastered by Marcel van de Vondervoort (Ulver, Triptykon, Neurosis, Cult of Luna), with the cover artwork by Portuguese artist Credo Quia Absurdum, and the layout by P. (Cursed Art).

‘Songs for the Exiles (Live At Roadburn 2019)’ is out now via Pagan Records on digital and CD formats.

The physical format will be available on a 6-panel Digipack CD strictly limited to 500 copies worldwide and exclusive to the Pagan Records Webstore and at the band’s gigs.

No repress will be made so get in quickly as this is definitely an album worth having.