When MetalTalk were invited for an exclusive chat with rock deity, The Virginmarys, at the brand new revamped Borderline, we said “hell yes”.

Chatting to Ally, Danny and newish boy Ross, the band are very excited to be back at this legendary underground den and this time headlining. As we head downstairs into this new look Borderline we are very impressed (some say it looks like a German S & M club) but we loved it.

There’s a huge bar with super friendly staff, a lounge area with comfy sofas and the toilets are like something out of the Starship Enterprise. So what do the lads think of this new space?

“We played here about five years ago and only recognised it from the road layout!” says the hardest playing drummer in the country, “it looks so clean, a bit like the Moloko Club from Clockwork Orange, apparently the guy who designed the lights is Coldplay’s lighting tech.” Thankfully no covers of Yeller were to be in the offing.

The Virginmarys are midway through their first headline tour and having a blast, “It’s been brilliant, people have come from all over the place. We tend to get these diehards, I think we’re kind of a cult band, a lot of people connect with the lyrics, from ‘you helped my through my divorce’ to ‘I was thinking about suicide and this song really helped me’.

“It’s been pretty cool, there was this one guy who wanted us to stay on his yacht and offered Danny $2000 dollars to buy his snare drum!” 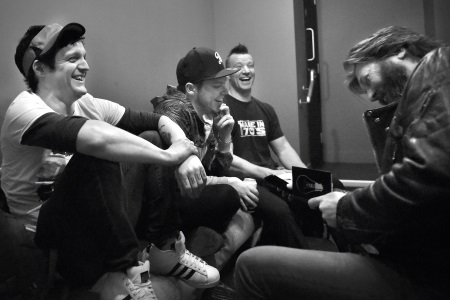 Social media is a massive plus for bands these days and the band hasn’t been shy of it, showcasing new song ‘Sweet Loretta’, “We just want to take it back to the simplicity of music, get it out to the fans. We’ve been lucky to work with some great people, so we’re producing ourselves in a studio in Mansfield” says Ally.

I liken them to Motörhead and the ethos of getting it out there and Danny is very receptive.

“I think that’s what we get off on. We always feel that we don’t play enough, we want the fans to hear new material. No-one’s ever really got what we are or how to market us, we’re a crossover of rock, indie and punk, it depends what you class as what. It resonates with the fans and that’s what keeps them coming back. You can play 10 dates with a huge band but it just feels right this way.”

From supporting massive acts and recording with Gil Norton, “We love his work and wanted to have him on board and it was a brilliant experience, I’m really proud of it. But now the headset of the ‘Marys is all about not looking back, just looking forward.”

Mr Dolan’s FB page is packed with his pure rock’n’roll injuries from blood blisters to “piece of shit drum stools”. After buying a proper tidy throne that “properly cushions yer ass” the stool didn’t co-operate and he ended up playing snare and thigh at the same time. Ouch!

Manchester is a stand out gig for the boys with Ally crowd surfing like Jesus walking on water! Danny recalls “I thought Fuck, ‘E’s gone in! Glasgow, Newcastle, Birmingham we love, it was amazing. Great diehard funny people you just have a crack with.”

New addition to the line up, Ross, chips in, “I like the way everyone comes out on a Sunday night and gets smashed knowing they’ve got work in the morning, just losing their shit. It works both ways, if I see people losing they’re shit, it makes me lose it even more.” 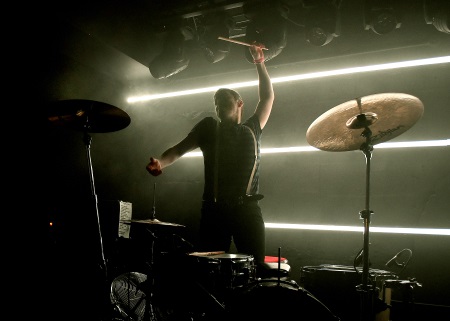 Ross, the bass machine goes on to reveal how he was a fan and bass tech so stepping into the void left by Matt Rose was almost seamless. The osmosis translated into rehearsals with Ally saying “do you know Bang, Bang, Bang” and it just happening. I put this to the test by requesting ‘Push The Pedal’ as they were settling on the set list and ‘Oh Hell Yeah’ it was nailed!”

So onto the gig and the band were at their VM finest. A clever mix of the classic ‘Mary’s setlist with a sneaky peak at their new tunes, the energy as they kick off with ‘Dead Man’s Shoes’ is supercharged and the packed-out Borderline is jumping.

The Big Man on bass is already making his presence felt bringing a hard edge to the sound. The energy in the new look Borderline is more than enough to raise this from basement to penthouse.

The venue is fuller than a Japanese tube train at rush hour and Danny towers over his kit as he leads us into Halo, blasting out pure punk venom on the skins, the backline and lighting are working overtime as Ally announces “We are the Virginmarys from the North’.”

The Pied Piper of drums leads this rag tag assembly onwards as he smashes his cymbals into submission, whilst Ross draws the pogo-ing crowd in with his hard, heavy and in your face style.

Pure, punk class up next with ‘I Want To Take You Home’ and Ally is in full vocal assault. 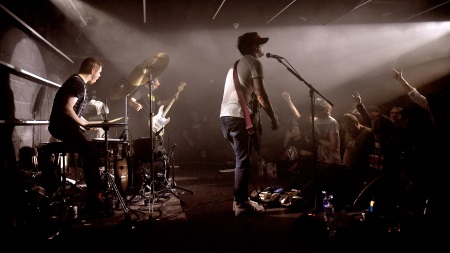 In comes ‘Sweet Loretta’ with its sense of irony and doom followed closely by ‘For You My Love’ surely a future pop punk classic anthem, with more energy than Mr Motivator, Ally leads this musical bootcamp onwards. Like the T-shirt says, Peace Love Truth Music! It is all here!!

Danny is up again as the first bars of ‘Push The Pedal’ roar out, a song not heard since their Abbey Road for Umusic.com. The crowd goes seriously mental as Ally screams out in his trademark blood vessel bursting war-cry. The Borderline is loving this rare treat.

This full on, throttle down, nitro-fuelled onslaught progresses, getting harder and heavier as the night continues, a full on alive and dangerous overload of sound, never have cymbals been so abused since Odin himself made his Warhammer! 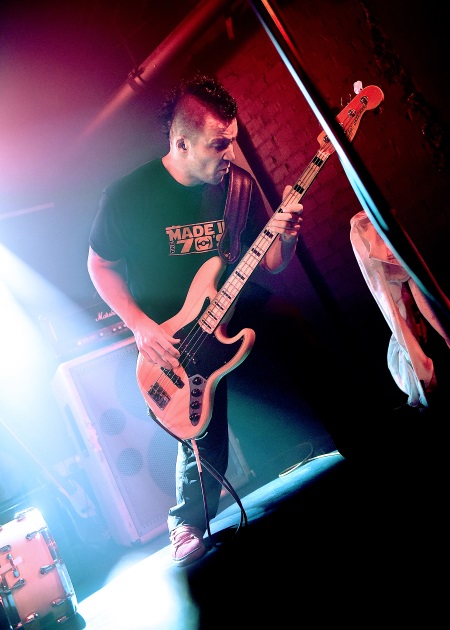 The massive single ‘Motherless Land’ is the next to join this heroic march forward and with the crowd at their mercy ‘Bang, Bang, Bang’ brings the set to a frenetic close. Possibly, this band’s finest showing of power, attitude and plausibility so far.

Slightly stunned, with ringing ears and a bloody great grin on our faces, we leave this reinvented club, powered by one of the best shows so far this year, cheers boys! Watch out Camden Rocks you have been warned. 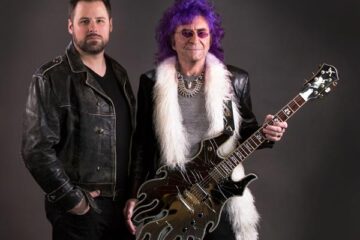