Polish Doom-laden Black Metal trio Above Aurora return with a second studio full length ‘The Shrine of Deterioration’, a follow up to 2016’s debut full length ‘Onwards Desolation’ and the ‘Path to Ruin ’EP in 2018.

The band are currently residing in Reykjavik, Iceland, an ideal creative environment for this latest offering, which was recorded this winter and consists of six new compositions offering “a hypnotic journey through various dimensions of pessimism. The album presents a pessimistic, trance-like Black Metal rooted in the tradition shaped by the likes of Burzum, Funeral Mist, Fog or Watain.”

The band told MetalTalk that: “‘The Shrine of Deterioration’ captures the current state of the band as mankind’s feeble condition continues to decline. Perhaps it is the essence of ‘Above Aurora’ – our disappointment and resignation, loathing and self-reflections, sonically more complex than the previous releases, yet continuing the same form.”

‘The Shrine of Deterioration’ spans thirty-six-minutes which, whilst maintaining the bleak quality of its predecessor, does feel more atmospheric and multi layered than the debut release. I must add its predecessor was also a very good album, very listenable, but this new album makes a very positive additional progression in their overall sound.

Opening with ‘Blurred Luminosity’, which is an atmospheric and hauntingly bleak instrumental track that builds and then declines away again in hypnotic stages.

Things improve further with ‘Virus’, a track with a very organic ebb and flow, ranging from the brutally punchy and dark to the hauntingly sublime and reflective. The vocal delivery has clarity of content and powerful intonation to the rasping delivery here and throughout the album, as with the previous offerings.

There is a drum infused onslaught from the offset on ‘Barren Lore’ with blackened riffs that cut through the vocal rasp and in contrast you get some hypnotic reflective elements that build on the already atmospheric nature of the track.

Continuing with that hauntingly hypnotic feel that complements the vocals so well, next up is ‘Celestial Monarch’, a well phrased track with an unsettling aura and powerful repeat build.

Probably my favourite track, although it is a seriously difficult decision, is ‘Precarious Foundations’, which has a superb contrast between the plodding pace of the haunting repeat and the intense blackened elements, all of which are woven together with a rasping vocal content and superb mid-point drum and bass highlights. 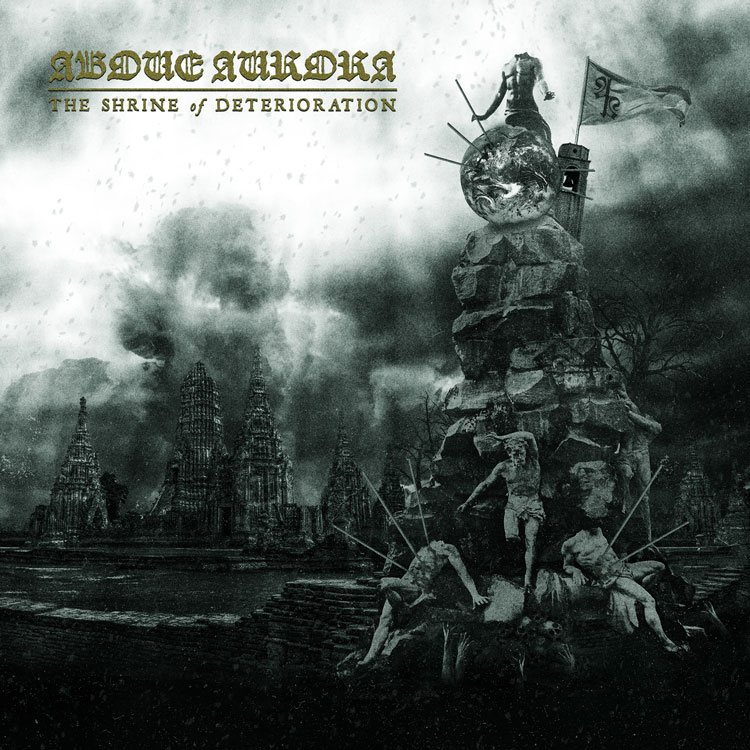 Finally closing on the album’s eight minute monster, ‘Splinters’, which has a compelling drive to its opening, before taking on a more hypnotically blackened stance that ebbs and flows as it twists and turns across it’s duration.

‘The Shrine of Deterioration’ will be available in the following formats: Digital, CD and LP from Pagan Records from the 6 June.

Despite the bleak source of inspiration, I felt that this album has a surprisingly and cathartically invigorating effect.