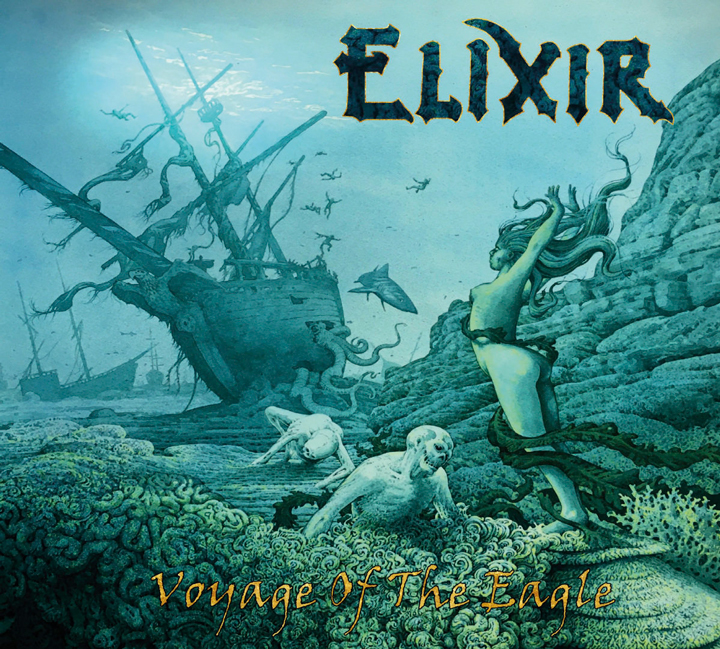 Featuring four of the original line-up that created the highly acclaimed ’The Son of Odin‘ album, Elixir have today announced a new album is to be released the day before their eagerly awaited appearance at Burr Fest, an event which will see Kevin Dobbs reunited with the band for one final time.

‘Voyage Of The Eagle’ is on sale from 6th March and will be released following a new deal signed with Dissonance Productions.

Elixir were formed in London in 1983, when Phil Denton (guitars) joined brothers Kevin (bass) and Nigel Dobbs (drums). Vocalist Paul Taylor and guitarist Norman Gordon completed the line–up in 1984. Early demo recordings created a lot of interest in the band throughout the World helping to secure their first gig, supporting Tokyo Blade in London, on 4th January 1985.

Turing extensively throughout the U.K. in 1985, they also recorded the now highly-collectable 7” ‘Treachery (Ride Like The Wind)’. The positive response this single received, particularly from Ronnie James Dio‘s review in Kerrang! No 99, boosted the band‘s profile.

Elixir‘s debut album, ’The Son Of Odin‘, was released in 1986 and the first pressing sold out becoming a modern day collectors item.

Indeed the album has been named as one of ’The 25 Greatest Power Metal Albums‘ by Metal Hammer.

Four further albums followed, ending with ‘All Hallows Eve’ (2010), released through their own label.

The Dome, Tufnell Park, will prove a fitting close to this chapter of Elixir’s history, as it will be the last chance to see Kevin Dobbs appear with Elixir, before retiring at Burr Fest 2020. Luke Fabian will, with Kev‘s blessing, carry on with bass duties.

Elixir disbanded in 2012, with Paul Taylor and Phil Denton going on to form the band Midnight Messiah.

Previous article
ANVIL HAVE SOMETHING TO SAY…About ‘The Story Of Anvil II’, Lemmy’s Second Banana And True Love From The UK
Next article
JOE SATRIANI: IN CONVERSATION ABOUT HIS SOLO CAREER, CHICKENFOOT AND COLLABORATIONS