Following on from their impressive Outlaw Country cover album ‘Outlaws ‘Till The End Vol 1’, DevilDriver have returned to their more traditional Groove Metal roots, in what promises to be a busy few years ahead for the band.

The album opens with the ominous guitar intro of ‘Keep Away From Me’, which quickly builds into the kind of Death Metal maelstrom that will surely keep circle pits around the world moving.

‘Vengeance Is Clear’ is a straight ahead assault of Heavy riffs and machine gun drumming, along with some of frontman Dez Fafara’s most ferocious screams of recent years.

‘Nest Of Vipers’ sounds like old school Helloween guitar licks crossed with Pantera, all mixed up with DevilDriver’s own blend of modern Metal. The guitars of Mike Spreitzer and Neil Tiemann lock in to form a truly great heavy sound, without sounding muddy or compressed. Definitely one of the best songs on the new album.

‘Iona’ moves the listener back into Slayer territory, which the rhythm section of drummer Austin D’Amond and bassist Diego Ibarra take in their stride.

A thunderous beating of the war drums starts one of the most interesting tracks on the album.

‘Wishing’is a real surprise, with Dez showcasing his clean singing for the first time! The result sounds like an comforting mix of Death Metal and Opeth’s more progressive, gothic sounds.

‘You Give Me A Reason To Drink’ is a less interesting prospect, but it should please the less adventurous fans who just want to hear straight up Death Metal fury. 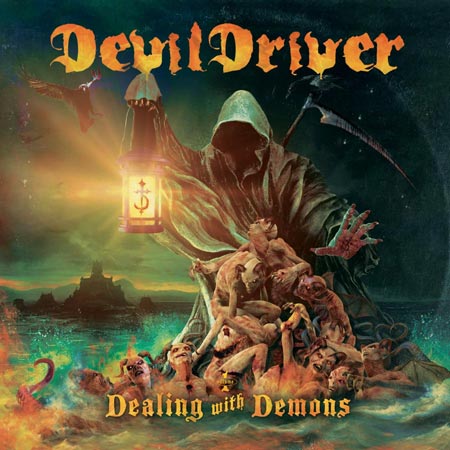 The title track ‘Dealing With Demons’ is a moody affair, full of groove heavy riffs and cymbal destroying blast beats, with a tasty solo to boot. With the lyrical themes of facing down inner demons and outward hypocrisy, it is a fine, unifying theme to the whole album.

The album ends with the eerie introspection of ‘Scars Me Forever’, which runs with similar themes and boasts a ten ton riff on top.

After almost two decades on the road and in a genre that all too often sees repetitive riffing and tired imagery passed off as “Old School” and “Authentic”, they are still trying their best to remain creative.

For the most part, they are succeeding.

Since ‘Dealing With Demons’ is expected to be the first part of a double album, fans old and new have a lot to look forward to from Dez Fafara and co.