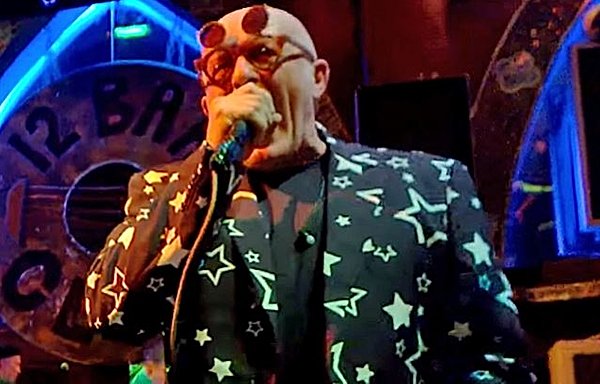 V1, the band of former Iron Maiden members Dennis Willcock and guitarist Terry Wapram, have disbanded due to the fallout from Willcock suing Maiden over copyrights to classic songs he claims he wrote the lyrics to.

This comes on top of a dreadful few days for Willcock as two important Iron Maiden organisations publicly distanced themselves from the singer after fans turned against him en-masse after the lawsuit story was revealed last Wednesday, 27th June.

“Concerning the ongoing dispute and litigation proceedings between Dennis Willcock, Steve Harris and his management, I regretfully announce the disbanding of V1.

“As ex-members of V1, we wish to distance ourselves from this situation. However, we want to thank everyone for their appreciation and gig support.”

Willcock deleted his social media profiles shortly after the lawsuit was revealed, presumably due to the massive backlash against him with many questioning not only his motives but the explanation as to why it has taken him nearly forty years to take action over this matter.

The court documents make reference to the statutes of limitations, which is the maximum time after an event within which legal proceedings may be initiated, which in this case is six years. Statutes of limitations begin from when the alleged offence is discovered by the aggrieved party (plaintiff).

The songs Willcock is claiming he wrote the lyrics to are ‘Iron Maiden’, ‘Phantom Of The Opera’, ‘Charlotte The Harlot’ and ‘Prodigal Son’. These are referred to in the court documents as ‘The Willcock Works’ and the singer claims he was unaware that Maiden had recorded and performed these songs before February 2014.

As well as the story provoking mass outrage amongst Maiden fans, Maiden77 and Burr Fest have severed ties with Willcock.

Maiden77 is an organisation “dedicated to the former members of Iron Maiden” who publish photos and anecdotes about Maiden’s very early days and organise events involving former Maiden members.

V1 were due to play a Maiden77 event at The Cart & Horses in Stratford, London, the pub that is billed as “the birthplace of Iron Maiden”, on the same weekend Maiden wrap up the current leg of the ‘Legacy Of The Beast’ tour at London’s O2 but the organisers have now pulled the band from the bill. This action was taken before V1 disbanded.

Burr Fest is an annual charity event held in memory of former Iron Maiden drummer Clive Burr with all proceeds going to MS Action Fund in Walthamstow, London, who worked with Clive throughout his battle with MS, and continue to work with his partner, Mimi. The 2019 event will be headlined by Maiden uniteD With Dennis Stratton.

MetalTalk understands that an unofficial Iron Maiden fan gathering is in the early planning stages and should the case actually reach court, this will take place at the venue of the trial on the same date.

Organisers are hoping to mobilise Maiden fans from all over the world for a massive show of support and to air their feelings about this case.​

A spokesman for the proposed event told us on Saturday afternoon:

“Thousands of Maiden fans gathered outside the court would be an impressive sight and leave those bringing the action in absolutely no doubt what the fans think of all this. They may well see the blood begin to flow.”

“I feel unsettled, now I know that I’ve done wrong. I’ve messed around with mystic things and magic for too long.”