Iron Maiden are once again being sued over copyrights relating to songs from the early part of their lengthy career and this time there are six songs involved.

Papers were recently filed with the High Court which laid out in full the particulars of the claim, just as they were in May 2017 when a claim arose over ‘Hallowed Be Thy Name’. That claim has since been settled amicably and in full.

The new claim is again specifically against Steve Harris, Dave Murray and publishing company Imagem Limited and is brought by Barry McKay, the former manager of Lindisfarne who also brought last year’s ‘Hallowed Be Thy Name’ action on behalf of Brian Quinn, aka Ingham.

Maiden dropped ‘Hallowed Be Thy Name’ from their setlist during the second part of last year’s ‘The Book Of Souls’ world tour but have reinstated it for this year’s ‘Legacy Of The Beast’ tour.

‘Hallowed Be Thy Name’ is one of the six songs in the latest dispute, five of which are referred to in the court documents as ‘The Willcock Works’ as they form the claim being brought on behalf of Iron Maiden’s second vocalist, Dennis Willcock, who fronted the band between 1976 and 1978.

The latest dispute regarding ‘Hallowed Be Thy Name’ concerns one line of lyric which is being contested on behalf of former Beckett members Terry Wilson-Slessor and the late Kenny Mountain.

It is claimed in the court documents that:

“During 1977, Mr Willcock wrote the lyrics to four songs as follows:

1. Prowler: This song was inspired by a friend of Mr Willcock and was performed by Mr Willcock wearing a rubber mask. The music was written by Mr Harris (with some contribution by Mr Murray).

2. Charlotte The Harlot: This song was inspired by a colleague of Mr Willcock. The music was written by Mr Murray.

3. Phantom Of The Opera: This song was based on the novel by Gaston Le Roux. The music was written by Mr Harris.

4. Iron Maiden: At the time when Mr Willcock joined the band, Iron Maiden performed a song under this title. In substitution for the then existing lyrics, Mr Willcock wrote new lyrics to fit in with a theatrical stunt involving a sword and fake blood. At the same time, Mr Harris re-wrote the music.”

In a separate section of the documents, it is claimed that:

“In or about 1978, Mr Willcock co-wrote (with Mr Harris) the lyrics to a song called Prodigal Son. Mr Harris wrote the music.”

Dennis Willcock’s original lyrics to these five songs are included in an Annexe to the court documents and ‘Prowler’ is identical to the version recorded on Maiden’s 1980 debut album.

Willcock’s ‘Prodigal Son’ lyrics are also noticeably different throughout to the version on Maiden’s second album, ‘Killers’, but again, are still recognisable with some lines being identical.

The court documents claim that “The Willcock Works were original literary works” and that “Mr Willcock was the author and first owner of the copyright in the Willcock Works (in the case of Prodigal Son, jointly with Mr Harris).”

Regarding the sixth song in the current claim, ‘Hallowed Be Thy Name’, the court documents claim that the line: “Catch your soul, he’s willing to fly away” was taken from a Beckett song, ‘A Rainbow’s Gold’, which was actually covered by Maiden and released as the b-side of the 1984 ‘2 Minutes To Midnight’ single as ‘Rainbow’s Gold’.

In the court documents the line in question is said to have been reproduced in ‘Hallowed Be Thy Name’ as: “Catch my soul cos it’s willing to fly away.”

This is not accurate because the word ‘cos’ is not included in the lyrics of ‘Hallowed Be Thy Name’.

This new ‘Hallowed Be Thy Name’ action is being brought on behalf of former Beckett vocalist Terry Wilson-Slesser and the estate of former Beckett guitarist, the late Kenny Mountain, who co-wrote ‘A Rainbow’s Gold’ and were properly credited by Iron Maiden on the ‘2 Minutes To Midnight’ single.

After the break-up of Beckett, Terry Wilson-Slesser went on to form Back Street Crawler with former Free guitarist Paul Kossoff before being invited to audition for AC/DC. After passing up that opportunity, he actually replaced Brian Johnson in the band Geordie after the latter got the AC/DC gig.

It is believed that Wilson-Slesser then auditioned for Iron Maiden to replace Paul Di’Anno who left the band in September 1981 to be replaced by Bruce Dickinson instead.

The court documents also make reference to the Maiden song ‘Sanctuary’, saying that it was written by former Maiden guitarist Bob Sawyer, aka Angelo. It is claimed in the documents that:

The documents also make reference to the statutes of limitations, which is the maximum time after an event within which legal proceedings may be initiated, which in this case is six years. Statutes of limitations begin from when the alleged offence is discovered by the aggrieved party (plaintiff).

The court documents say that Willcock was unaware that Maiden had recorded and performed ‘The Willcock Works’ before February 2014. It is claimed that he turned his back on the music industry in “about 1980” and had no further contact with any Maiden members until 2014.

Regarding ‘Hallowed Be Thy Name’, the court documents say that Terry Wilson-Slesser was also unaware that his and Kenny Mountain’s copyrights had allegedly been infringed until 2016.

The court documents say that “a substantial part of Rainbow’s Gold had been incorporated within Hallowed Be Thy Name”, when in fact the claim is for the aforementioned one line which is, as previously mentioned, misquoted anyway.

The claim for damages, which is calculated as a proportion of the share of publishing income referable to ‘Prowler’, ‘Charlotte The Harlot’, ‘Phantom Of The Opera’, ‘Iron Maiden’, ‘Prodigal Son’ and ‘Hallowed Be Thy Name’ is in excess of £2million. 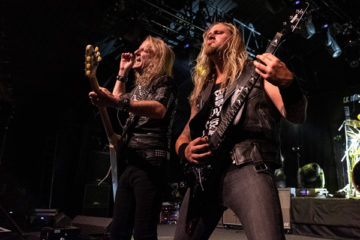