After simultaneously tantalising our ears and searing the flesh from them with their debut EP, Overthrown Into Oblivion in 2020, Italian duo, Defechate, namely Luke Scurb (Humangled, Suture Messiah) and Giuseppe “Tato” Tatangelo (Antipathic, Glacial Fear, Throne of Flesh, Unscriptural, Zora) are back with a full length, the ten-track thirty-four-minute, Unbounded, to brutalise our senses further.

Defechate are joined once again by a couple of familiar guest appearances returning from the EP. Fred Valdaster (Humangled) covers drums on Repent to Be Dead. Nephros has drum duties on Burning Like The Water. Additional guitar on Repent To Be Dead is courtesy of Paolo Olivier, with Federico Fulceri dropping an insane guitar solo on Hyperammonaemic.

So, what’s changed since the EP? well, the predecessor delivered “Death Metal from different perspectives heading in unspecified directions,” whereas Unbounded “comes from the experience of previous Defechate works, giving breath to new ideas, and enclosing everything within this musical grinder, delivering Death Metal with feet sunk in the Old School domain with the gaze turned to his own influences, a deviant gaze, which often dispenses anger and violence against hypocrisy and pre-packaged schemes.” It has a sharper focus of direction whilst still being both brutal and uniquely free thinking. 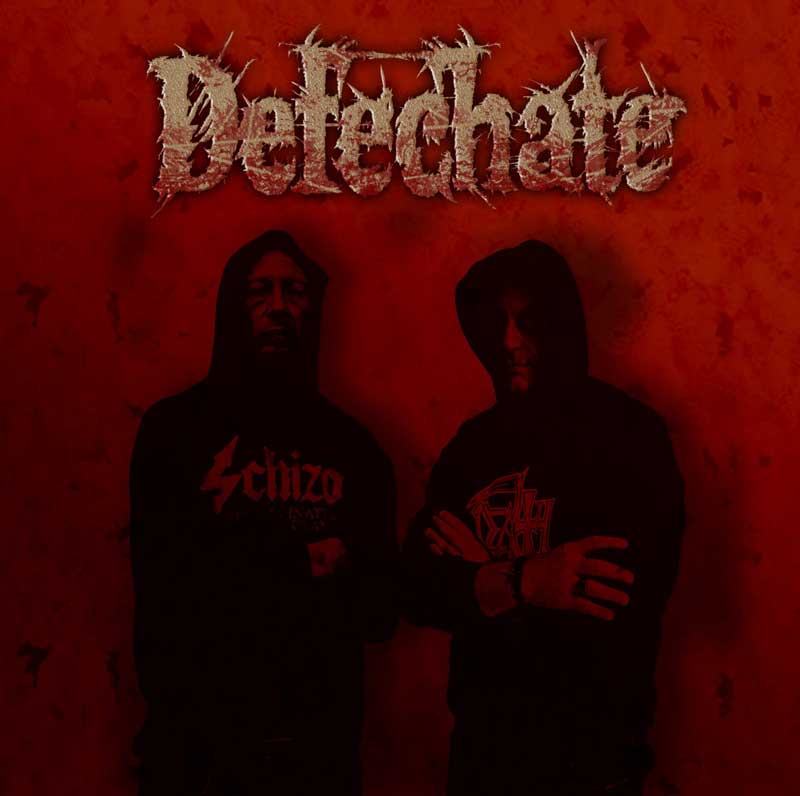 Much of what has helped shape this release has come from the sound created on the digital single, Oxidized Man, also appearing on this album, which was released shortly after the debut EP. It also featured two other tracks, but this piece helped focus the direction of the current Defechate sound. The second single followed this, the tantalising forerunner to this album, Burning Like The Water, again also appearing on this album. But more about those later.

Opening with the slightly eerie, aural assault, Hyperammonaemic, where Federico Fulceri’s guitar solo adds a lot of second-half impact to a track that would otherwise be just very linear and driving.

Next, Naked Thoughts is a punchy, addictively catchy number where the vocals bark and snarl their way through. I love the low-profile riffing coursing beneath the track with an air of menace, an element that does crop up repeatedly across the release—one of my favourite tracks of the album.

Burning Like The Water has an ominous air, building slowly but surely in pace and force as it progresses. Unexpected Denier comes at you at a furious pace but still manages to deliver a few quirky moments in the riff department that catch your attention.

Haunting, subtly complex, repeat riffs, face searing growls and a pace that builds like a runaway truck combine to make Repent To Be Dead an exciting listen and another favourite of mine.

Oxidized Man is an utter brute of a track. It’s crushing and sinister in equal measures, but it also ebbs back to more reflective moments. One of the elements I love both here and across the album is the double vocal delivery. It adds a dialogue feel as well as depth and texture to the sound.

Epicurean Herd opens with a sound bite, originally by the Roman lyric poet, satirist, and critic Horace, but made famous by Anthony Hopkins (and used here) as Hannibal Lecter in Red Dragon. “Think to yourself that every day is your last, the hour to which you do not look forward will come as a welcome surprise… as for me, when you want a good laugh, you will find me in fine state…fat and sleek, a true hog of Epicurius’ Herd.” This is followed by a wave of driving riffs and ground shaking growls, but despite the drive and intensity, it still manages to make a few very dynamic direction shifts and tempo changes, a cleverly constructed piece.

The Unbound Storm is another subtly complex piece and beneath the growls lie some interestingly complex riffs and rhythms.

Just Falling Leaves ramps the tempo up to frantic proportions arriving at the final piece Il Signore Del Disordine, which continues the tradition of the EP of ending on a track with Italian lyrics. An all-out assault, I love the riffs here, reminding me a little, not surprisingly, of Humangled. Another one of my favourite pieces, making an exciting conclusion to Unbounded.

A strong album from start to finish, in Ruling The Street Scene, Generation Landslide have created something both old and new Hair Metal fans can enjoy. Words: @taylorcamphotos #GenerationLandslide