Dead Posey are a dark and brooding rock duo made up of Danyell Souza (vocalist and producer), and Tony F. (producer and multi-instrumentalist), whose music intersects the macabre and evocative, with a smattering of irony and black humour, while keeping it introspective and thought provoking. This unique admixture creates a wholly mesmerising sonic landscape for the listener to get lost in.

Back with their second EP, ‘Malfunction’, which is the follow-up to their spectacular debut ‘Freak Show’, Dead Posey have crafted a world from the darkest recesses of their minds.

Picture a movie directed by David Lynch, with Salvador Dali responsible for the set design, Edgar Allan Poe as principal writer, and Dead Posey providing the soundtrack, and you can begin to understand the journey this short, but perfectly formed EP is about to take you on. 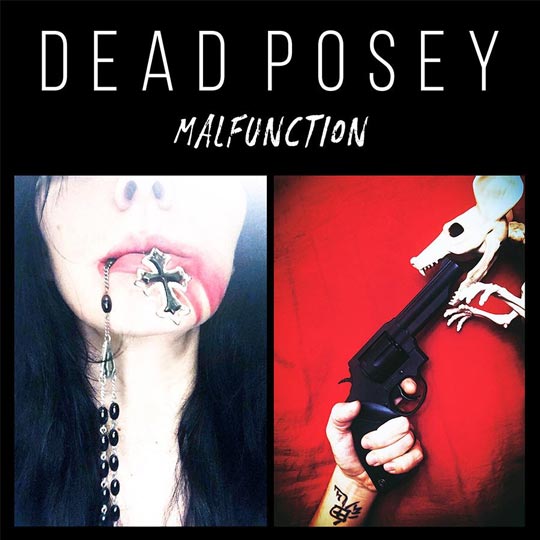 Breaking down the tracks, the EP opens with ‘Head of the Snake’, a song about breaking through perceived barriers, and the strength in perseverance. It has such a frenetic energy about it that it’s almost impossible to listen to that song without some part of your body starting to subconsciously move, and feeling like you just want to get up and mosh about the room.

‘Parasite’ slithers into the consciousness like some kind of Lynchian nightmare from the Black Lodge. ‘Bad Things’ has that brilliant stomp-beat, with that discordant dirge of sound layered over it, but what I particularly like about it is the dry humour that seems to pervade the lyrics.

In a world of superficial lyrics, it’s particularly nice to find another artist who puts some thought into what they are crafting. Final track ‘Holy Roller’ just finishes off the EP in expert fashion, and of course leaves you wanting more. I can imagine this one will go down a storm live.

At first their overall sound reminds me of a love child of the Pretty Reckless and Marilyn Manson, but it soon becomes clear that it’s very much their own sound.

Danyell agrees that I named a few, adding that her influences encompass “The Kills, Marilyn Manson, NIN, Depeche Mode, Garbage, and Joy Division. I tend to lean toward artists and bands that are provocative and have sensuality and depth to them. Basically, anything dark, twisted and a little otherworldly is alluring to me.”

Musing on my thoughts, Tony adds, “I wouldn’t say a conscious influence, but the band’s you mentioned in British 80’s New Wave is a big part of the foundation musically for my whole life, esp. Depeche Mode & Peter Gabriel. I think it creeps in in terms of the melody, mood, sonics and arrangements in our music and this EP especially.” 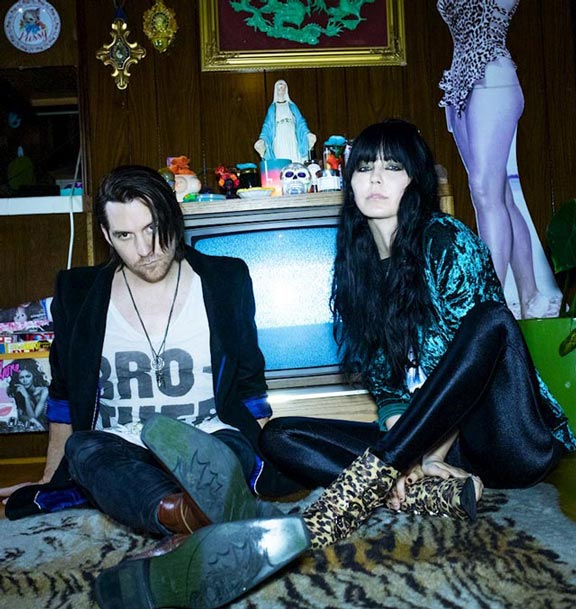 When pressed on whether they would consider a particular song as a defining track in their creative development, they offered this understandable explanation: “It’s hard to choose one. The contrast between melody and dark subversive themes, with carefully constructed arrangements and production elements that really jump out of the speakers are traits shared by all of our favourite artists, which we try to incorporate in our music.

“Depeche Mode has so many classic songs – personal favourites are ‘Policy of Truth’, ‘Personal Jesus’, and ‘Home’. It’s why we like Manson songs like ‘KILL4ME’ and ‘Dope Show’, or the Kills ‘Doing It To Death’ & ‘Black Balloon’.”

‘Malfunction’ has a very plush sound that you’d expect from a fully produced album, rather than an EP.

As an audiophile, it really is a joy to listen to. This is owed to the fact that while Danyell and Tony are excellent musicians and wordsmiths, they are also very much engaged in the technical aspects of producing, mixing, and engineering music. This dynamic has resulted in an ability to draw out every ounce of sound without leaving the final product feeling overproduced.

Starting with their song-writing process, Danyell explains, “We’ll both bring in our compiled ideas: guitar riffs and beats that Tony has stashed away and lyric and sonic ideas that I’ve concocted.

“From then on, we’re both in the trenches; for each song it’s like a tug-of-war of both our minds, constantly challenging each other to dig deeper to get to the real essence of what we want to say. We haven’t killed each other yet, so I think it’s working out OK.”

Tony agrees, adding, “While we’re both very interested in all the nuts and bolts of the production and sounds and all that, we try to get the core elements of the song (lyrics, melody, chords, feel) all dialed-in pretty early in the process so we have a strong foundation to build on.

“With this EP in particular, the actual song-writing happened very quickly – it was the production and getting things sounding just right that took some time.”

In order to create the impressive multi-layered sonic structures of their music, the duo use everything at their disposal to achieve their results, as they explain, “We build up the track piece by piece – there are definitely a lot of ‘live’ instruments that Tony plays such as guitar, bass, and a drum set on a couple songs.

“We do use lots of electronic elements to give ambience, mood, and energy throughout. We aren’t shy about using every tool and instrument at our disposal to get the sound and vibe we want.”

As the process moves towards the more technical aspects of the recording, Danyell suggests their method is, “very self-contained. We do pretty much everything ourselves. We push each other hard. It can be a tough process at times – there’s a lot of ‘killing our darlings’ and beating our heads against the wall until it’s just right.”

And Tony agrees, adding, “It’s definitely a careful balance to get things hitting hard and sounding larger than life, without overstuffing the music just because we can. We are a pretty good check and balance on each other in that regard.”

Currently in the studio working on their eagerly awaited full-length album, the duo revealed that “We’ve started compiling ideas and coming up with seeds of songs currently. We don’t have tentative dates for a first single yet, but our hope is this year.”

Knowing they are self-confessed perfectionists, something I know a little about as well, I wondered how they would go about choosing a single. “Since we’re on a label, they choose the single,” the duo explained.

For the EP, the single will be ‘Head of the Snake’, which seems the perfect choice to introduce ‘Malfunction’ to the masses.

If you are looking for some sonic food for the soul, and like your rock to be dark and edgy, then ‘Malfunction’ is most certainly the EP for you.

Should it leave you wanting for more, then I can also highly recommend their first EP ‘Freak Show’. I particularly loved their punk-infused cover of ‘God Is Gonna Cut You Down’, as well as the overall sound and energy of the entire EP.

Trust me, it will leave you impatiently waiting for their future full-length album.