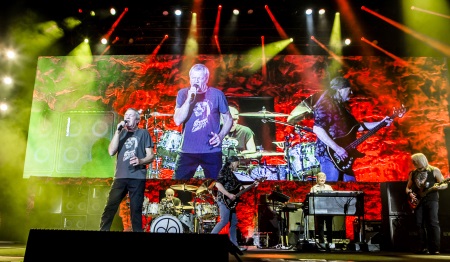 From the moment Cats in Space Vocalist Paul Manzi announced at The Borderline back in September that they had been asked to open Deep Purple’s shows on their ‘Infinite’ UK arena tour, I had eagerly been awaiting the cats landing on the big stage.

Not enough that we already had Europe on the bill, this was a Brucie bonus no one was expecting. Of course, Dean Howard used to be Ian Gillan’s guitarist, and it’s been reported that the Purple singer loves the band. 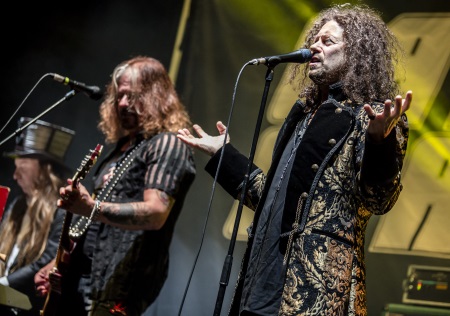 Come the night of the gig and the early start for the first band the crowd looked rather sparse, but such is the vastness of the O2 Arena, there was probably a couple of thousand who had taken their seats, which is a big step up from the three hundred just a few weeks earlier.

Those that decided to stay in the bars will no doubt rue that decision when they undoubtedly get switched on to these astro-navigating felines. 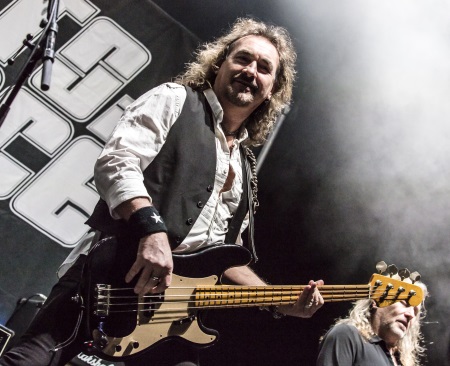 ‘The Sweeney’ theme intro is a reference to their retro sound, harking back to the 70s and as visions of Regan & Carter screeching around London’s streets in a MK1 S-Type Jaguar faded, it was all systems go as the cats leapt straight into the title track from their debut album.

‘Too Many Gods’, with its first word being “hello” is the obvious choice, with Manzi asking the question “how many Gods are out there, cos I don’t understand”, neither do most of us Paul. Its glorious harmonies, which all the band contribute to, carry the song to astronomical heights. 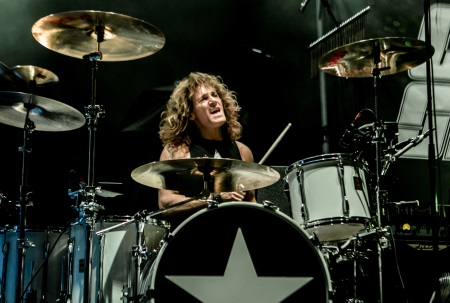 ‘Mad Hatter’s Tea Party’ with its piano opening, sees keyboardist Andy Stewart, who is seemingly the Mad Hatter, as prominent as anyone else. Sure, this is a guitar driven band, but Stewart’s keys are a fundamental part of this group’s impressive sound. I challenge anyone not to be humming this all night after hearing it.

‘Timebomb’ is very apt, given the ongoing spat between two cartoon character world leaders, with its lines of “trouble for you and me, another mad man’s victory, his itchy fingers want the thrill” and “hear the ticking of the timebomb, it’s too late”.

With its up-tempo ending warming things up, this band are a real contradiction in terms, bringing their retro sound bang up to date.
‘Greatest Story Never Told’ showcases the superb vocals of former Dumpy’s Rusty Nuts (among others) bassist Jeff Brown and takes us to their last song of the night. 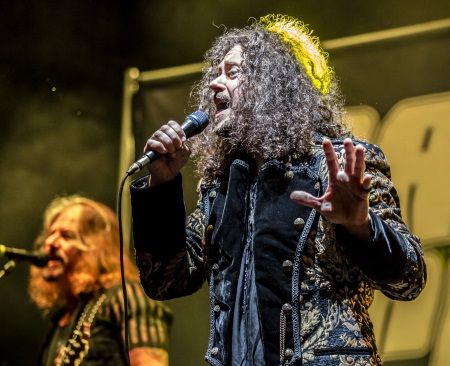 Set closer ‘Five Minute Celebrity’ wasn’t written about themselves, as surely more than five minutes beckons. Manzi boomed out the words “everybody’s talkin’ bout the new sensation” over the Who-like guitars and melodies; ‘Won’t Get Fooled Again’ anyone?

Let’s get one thing straight, no one’s fooling anyone here, it’s pretty clear these guys are destined for bigger things. This band is ready for liftoff, and if they’re not headlining major shows within a few years then I’m the man in the moon. 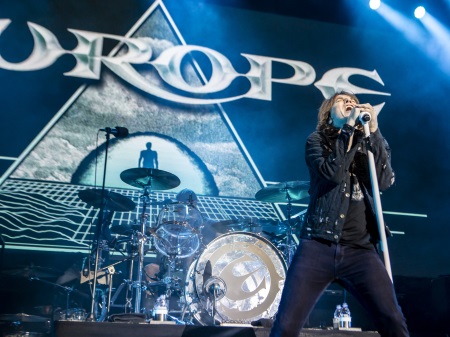 Europe start with a bold double whammy from their brand new release ‘Walk the Earth’, such is the confidence of the band.

The title track is followed quickly by ‘The Siege’, and their reputation as one of the slickest live bands around is confirmed by a quick glimpse around the arena, which is by now, all but full. The new songs, sounding huge to match their surroundings, are lapped up by the crowd, and the band are clearly enjoying this slot supporting their heroes.

‘Rock the Night’ was the first of their three biggest hits, all off ‘The Final Countdown’ album, the second being ‘Carrie’, the ultimate ballad giving the crowd a chance to join in with proceedings. 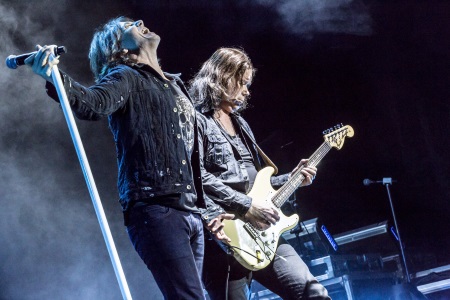 ‘Last Look at Eden’ ended with Tempest declaring “you look good out there, but not as good as us”, now there’s nothing wrong with a touch of self-confidence and who would argue with a guy who looks like he owns the recipe for the elixir of life.

‘Election Day’ is the last of the new ones tonight, followed by ‘Superstitious’ with its amusing “let’s sing together” mid-section. Tempest introduces the next song with the obligatory “honoured to be here” comment, though his sincerity is never in question, as the band’s love for the headliners is well documented.

From the slowest song of the night to the fastest, ‘Scream of Anger’ showed John Norum at his shredding best, definitely one of the nights highlights. 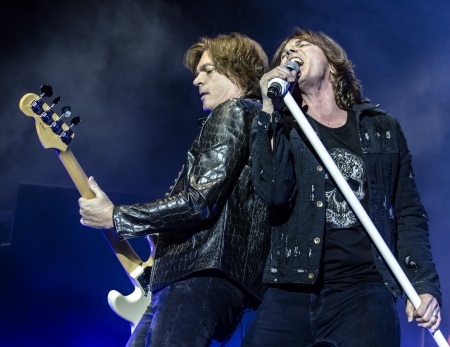 ‘War of Kings’ with its dramatic opening, the up tempo ‘Hole in My Pocket’ and ‘Days of Rock ‘n’ Roll’ which sees Tempest on guitar, make way for the final song of the set.

Now the last time I saw Norum play ‘The Final Countdown’ it was also in London, on a Sunday night seven years ago, on stage at the rather more humble Monarch pub in Camden, where he jammed with the Metalworks crew. He obviously sprinkled some of his magic dust that night, as Richie Faulkner and Davey Rimmer both went on to bigger things with Judas Priest and Uriah Heep respectively.

Tonight was obviously a more grandiose affair, though no less exhilarating, as the band played what has to be one of rock’s most distinguishable anthems. The keyboard opening by Mic Michaeli is surely one of the most well-known intros to a song ever.

Does an ultimate rock anthems album that doesn’t include ‘The Final Countdown’ even exist? If it does, then it’s a serious breach of the trade descriptions act.

The biggest compliment I can give them, is that although they played for an hour, it seemed like half the time, and with all the recent Brexit divorce talks at the moment, this is one Europe we definitely do not want to be estranged from. 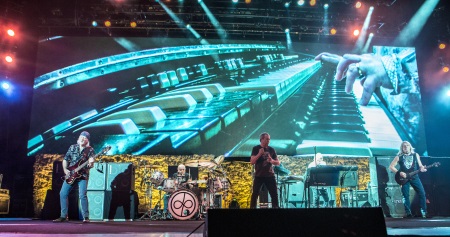 With the new album title ‘Infinite’ contradicting with the current tour dubbed ‘The Long Goodbye’, one could be excused for being a little confused as to the band’s future intentions, but as Deep Purple bassist Roger Glover mused recently on the conundrum, “the door’s closing, but it’s not shut yet”.

Anyone who has taken a listen to the latest offering, must surely be of the opinion that the door in question needs to be wedged firmly open. With a back catalogue as strong as Purple’s, it would be easy for the band to lean heavily on it and play a greatest hits set, which to be honest, not many people would complain about.

But they were having none of that as they started the night off with new album opener, the excellent ‘Time For Bedlam’ featuring some awesome Hammond keys from Don Airey. With barely a breath to spare after the almost spoken outro, the thunderous drum intro to ‘Fireball’ sees the incomparable Ian Paice delivering powerhouse beats with minimalistic effort and on a kit more conservative than a backbench full of Tories. 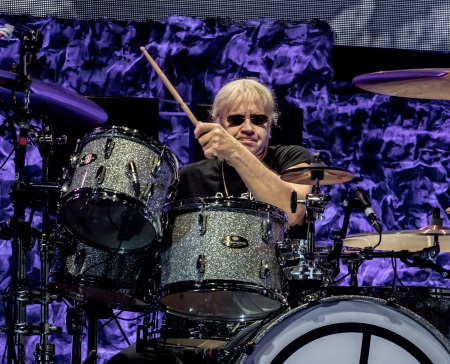 There’s no drum riser and no ego going on here, though if there were, then no one would raise an eyebrow, Paice sitting firmly at stage level with the old school thought of “feeling it” better through the floor, obviously in mind.

‘Bloodsucker’ is next, or ‘Bludsucker’ depending on which album you have, though I guess it’s the latter as Steve Morse is playing it tonight, showing that Ian Gillan, at a remarkable seventy-two years of age, still possesses a set of pipes that would be the envy of some singers half his age. 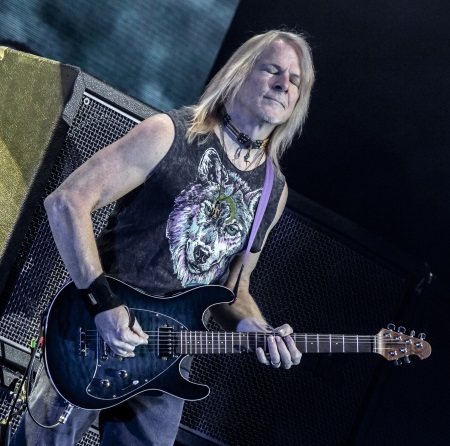 He obviously has to reign it in a bit in parts but overall he puts on a master class on how to deliver songs – that were recorded in some cases over forty years ago – live, when his voice was in its chest-beating prime.

Apologising for the chairs we had to endure, saying he had ordered sofas and futons, Gillan introduces the next song ‘All I Got Is You’ as “a little light jazz” and sees the singer taking his ‘dad dancing’ to the next level.

Dedicating ‘Uncommon Man’ to “our beloved Jon Lord” raises a huge cheer from the sold-out crowd, Morse taking the spotlight with classic fretwork before being joined by the rest of the band for the fanfare feel opening.

The charismatic frontman’s Christmas tale of the balloon descending from the ceiling on to the sprig of holly adorning the Christmas pudding and exploding, covering everyone at the table with custard, has to be one of the more fanciful introductions to a song, the element of surprise leading into ‘The Surprising’, one of the new albums outstanding tracks. 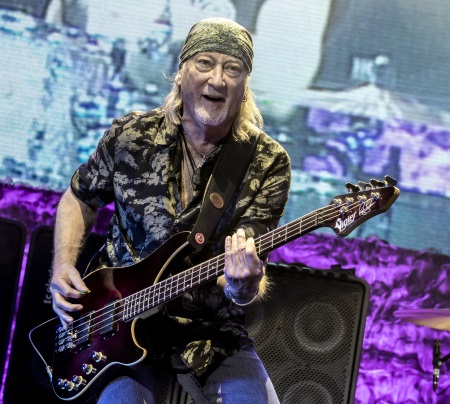 The elongated opening to ‘Lazy’ gives the singer a chance to sip on some ginger tea or whatever his preferred choice of larynx lubricant may be, and with the rock-solid rhythm of Glover and Paice allowing Airey, Morse and Gillan on his mouth organ, a sprinkling of self-indulgence, lets this classic track ebb and flow nicely culminating into a full-on jam session.

‘Birds of Prey’ is the last of tonight’s new songs, showing off Gillan’s seemingly re-established lyric mojo on the new release, and afterwards found him thanking the audience for listening to the new songs with his Confucius-like comment, “if we don’t play any new ones, they’ll be no old ones in the future”.

‘Knocking At Your Back Door’ with its double-entendre-littered lyrics was the first of a ‘Perfect Strangers’ double header that sandwiched Don Airey’s keyboard solo, introduced by the singer as the King of Weirdestan and a whole host of unimaginable words that had me scrambling for my trusty Oxford English. 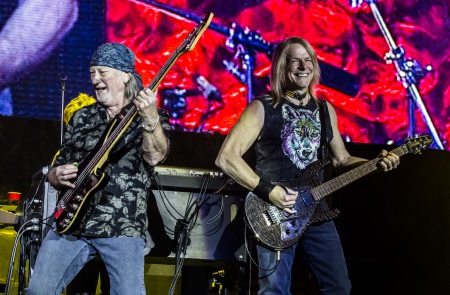 His six minutes of decadence included a bit of ‘Mr Crowley’, a lot of ‘Jerusalem’ and ended with some ‘Maybe It’s Because I’m A Londoner’, which led perfectly into the title track.

Even if for no other reason than to give his bandmates a rest, it showed the audience, audibly and visually via the keyboard cam and impressive screens, that this guy is at the top of the tree among his peers.

The main set ended with a ‘Machine Head’ double, ‘Space Truckin” and ‘Smoke on the Water’ where the band were joined onstage by John Norum, which seemed unrehearsed as Morse motioned to the Europe guitarist to take the first lead break. 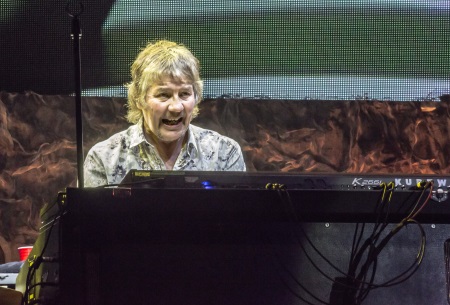 The band wasted no time in getting back on stage for the encore, and an impromptu ‘Green Onions’ made way for ‘Hush’ and a Roger Glover bass solo accompanied by Ian Paice, which just left the classic ‘Black Night’ to end the evening on a high.

My only criticism is slight, it wouldn’t have been hard to fit another classic in this set, by maybe shortening the intro to ‘Lazy’, taking out Morse’s mid-song guitar meanderings in the set closer, nick a bit here and a bit there, and with the time saved, maybe include ‘Child In Time’ if Gillan’s tonsils are up to it, or something a little less demanding if not. 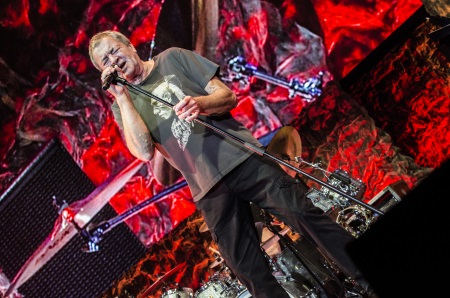 However, apart from that, tonight had everything, including great sound and lighting which showcased quality classic rock by all three bands encompassing everything that is so good about the genre.

As for Deep Purple, their calibre and musicianship knows no bounds. I think Mr Glover needs to start procuring a bigger wedge for that door.