London has been spoilt again as this is the only UK date of the current ‘The Rise Of Chaos’ world tour, much to the dismay of the rest of the country, and with Metal hearts bleeding for our brothers-in-arms, the signs are good as a queue stretches round the block. The London leatherboys are out in force it seems.

An absolutely packed out Koko crowd were treated to a twenty-one song, two hours long set from one of the greats of Heavy Metal who are out on the road in support of last year’s splendid ‘The Rise Of Chaos’ album. There have been a couple of changes since then though, with the departures of guitarist Herman Frank and drummer Stefan Schwarzmann who have been replaced with former Grave Digger axeman Uwe Lulis and American tub-thumper Christopher Williams, formerly of such diverse acts as Kid Rock, Blackfoot and Funkadelic. 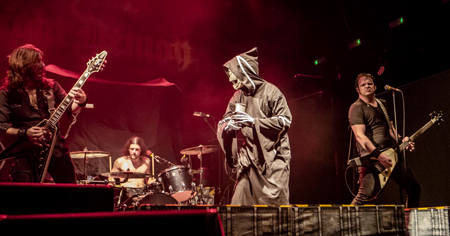 Special guests tonight are Californian three-piece Night Demon, who are really stepping it up a gear having bagged the coveted slot for the entire European tour, and after supporting Diamond Head and Raven in their homeland they are making some tsunami-like waves with the recent release of an expanded version of their current album ‘Darkness Remains’.
Vocalist/bassist Jarvis Leatherby has been here before in his other guise as singer with Jaguar and he also manages and plays bass in the rejuvenated Cirith Ungol, something which he can take great credit for, and he also organises the Frost & Fire Fest. This guy is a busy boy. 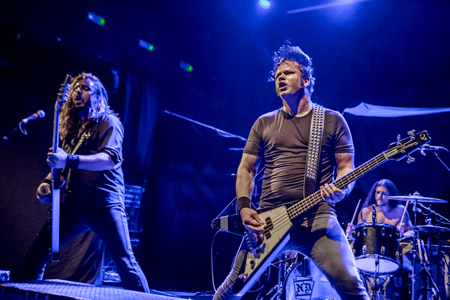 Explaining the reasons for the expanded album version, Jarvis told MetalTalk:
“We have been so blown away by the positive response to the record so far, that we thought it would be a great idea to release these assets to the fans right smack bang in the middle of the album’s cycle. Why wait twenty or thirty years to unearth the forensic building blocks of ‘Darkness Remains’? We are all alive now, and living this thing day to day, so let’s celebrate it.” 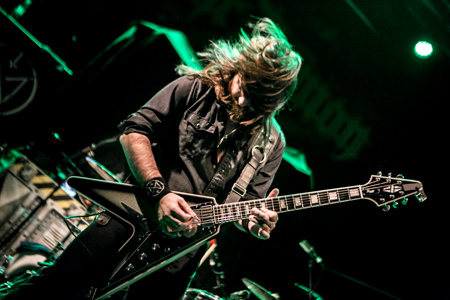 We couldn’t agree more, and with that sort of mentality and enthusiasm, we’re eager to see the guys get up and do their thing on stage.
They kick off the evening with ‘Welcome To The Night’ and it takes less than a minute from the opening riff and galloping bass for the band to nail their colours firmly to the NWOBHM mast, though to pigeon-hole them to that movement alone would be doing them a massive disservice. 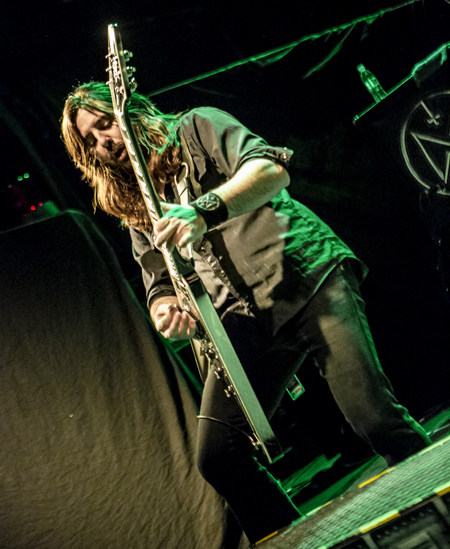 Without a pause, they move head on into the next song, ‘Full Speed Ahead’, a 100mph out of control juggernaut threatening to obliterate everything in its path. ‘Hallowed Ground’ steamrolls into ‘Curse Of The Damned’ which curiously shares its opening riff with ‘Screams In The Night’, a riff inspired by the mid-section of the Diamond Head classic ‘Helpless’, which takes us nicely into a cover of Diamond Head’s ‘Lightning To The Nations’. These guys certainly have impeccable taste.
‘On Your Own’ and ‘Heavy Metal Heat’ lead into ‘Black Widow’, showcasing the blistering fretwork of guitarist Armand John Anthony, while Leatherby’s heavy low end signals the opening of ‘The Chalice’ which slows the pace slightly and sees a caped, skull-faced demon invade the stage, chalice in hand. 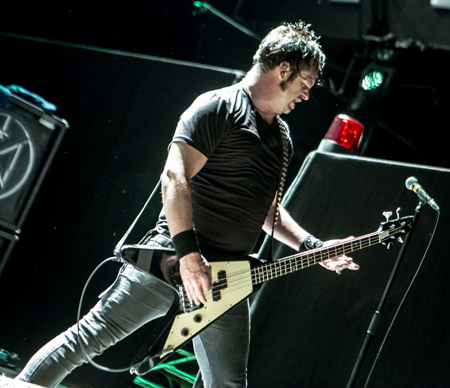 Drummer Dusty Squires’ opening beats brings ‘Night Demon’ in to close the set, but not before Leatherby finally converses with the crowd.
“Thank you London, it’s great to be back”, are virtually his only words all night, save for the odd “come on” whilst getting the crowd involved, and why not? Too many bands faff about between songs these days, wasting precious minutes that could be converted into another song, something that’s a real pet hate, but Night Demon let their music do the talking and it speaks volumes. 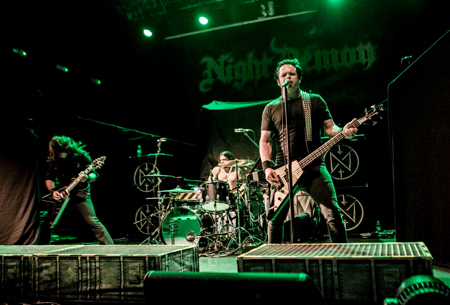 After a blistering performance like that, it’s little wonder this band have been added to the already impressive line-up of Europe’s premier Metal festival, the mighty Wacken.
But before that, the guys will be back here in London for the Frost & Fire festival at The Underworld in Camden Town on May 12th. Miss it at your peril. 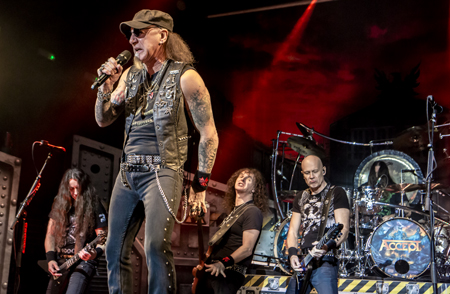 What a contrast between the openers and the headliners in terms of experience and longevity, and so there should be because if new bands like Night Demon are to break through then they must be given their chance. Those double bill headlining shows are all well and good, but let’s get the new boys up there.
Accept are rapidly approaching forty years since the release of their debut album, and like most bands of such an age, there’s been a few changes along the way, but the core of Wolf Hoffmann and Peter Baltes remain. Their aforementioned fifteenth studio album ‘The Rise Of Chaos’ is bang up there with their strongest material, making the band as viable today as they’ve ever been, and they’re not shy in letting us know they think exactly the same by playing half the album tonight. 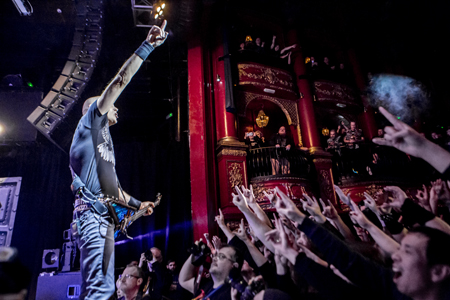 Drummer Williams’ assault of the huge gong behind him signals the start of the show with Hoffmann delivering the killer riff of ‘Die By The Sword’, showing why this song is the opener to the new album as well as the live set. ‘Stalingrad’ opens with another huge riff and shows why singer Mark Tornillo has cemented his place in the band as a perfect fit since replacing Udo Dirkschneider, who is now very firmly in the distant memory bank.
Three classics follow, as ‘Restless & Wild’, ‘London Leatherboys’ and ‘Breaker’ get the packed out crowd really warmed up, before leading into a four song barrage of new songs. Title track ‘The Rise of Chaos’, ‘Koolaid’, ‘No Regrets’ and the final new one for tonight, ‘Analog Man’ with its tongue in cheek lyrics hitting nearer the bone than you may first think. 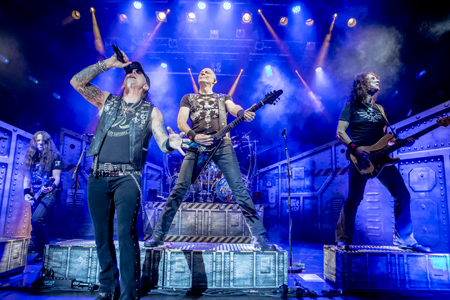 The four song salvo confirmed the five guys on stage have got their shit, well and truly together, this band are tighter than Donald Trump’s latest face restoration.
‘Final Journey’ makes way for ‘Shadow Soldiers’, slowing it down a bit with Tornillo dedicating the song “to the guys keeping the free world free”, leading into the Wolf’s guitar. Any man who has a flying V for every day of the week, like Wolf has, and in almost every colour of the rainbow can do exactly as he wants and he’s such a beautifully fluid player and totally appreciated by other plank spankers around me. 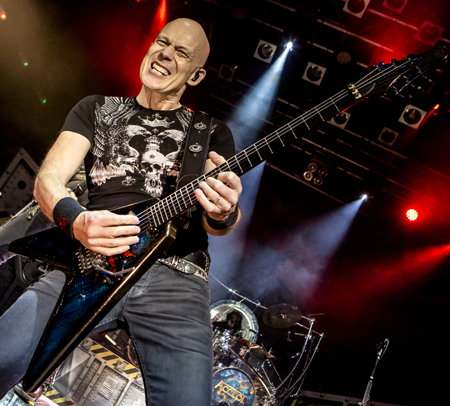 ‘Neon Nights’ keeps the same tempo, before rallying at the end, and ‘Princess Of The Dawn’ gets the crowd singing along, before Williams gives the gong some more treatment. ‘Midnight Mover’, ‘Up To The Limit’, ‘Objection Overruled’ and ‘Pandemic’ bring about the main set closer ‘Fast As A Shark’.
The band were clearly enjoying themselves and when it kicked off, it was even faster than Usain Bolt with a bad case of Delhi belly. It was clearly an exhaustive set, but they still had enough left in the tank for an encore of ‘Metal Heart’ and ‘Tuetonic Terror’ with ‘Balls To The Wall’ sending the hordes home with smiles on their faces. 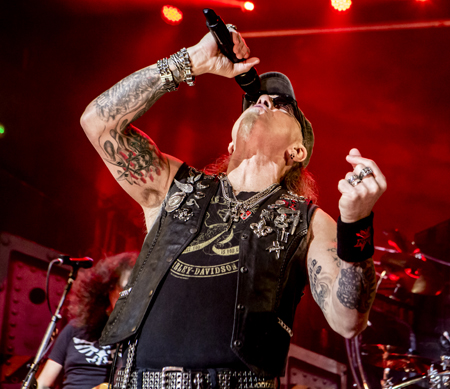 It was a superb evening with the only criticism being not even music related; who told the lighting engineer to shine the two spotlights either side of the stage up onto the gigantic mirror ball hanging from the ceiling, instantly inducing a stomach churning effect that could quite easily have resulted in the same guy, who was situated below me, receiving the very expensive lager contents of my considerable belly, all over himself and the sound guy.
It’s only February, but this show is a straight up contender for Gig Of The Year already. Here’s hoping they come back soon, but without the mirror ball.

Die By The Sword

Breaker
The Rise Of Chaos

Princess Of The Dawn

Up To The Limit

Pandemic
Fast As A Shark

Balls To The Wall 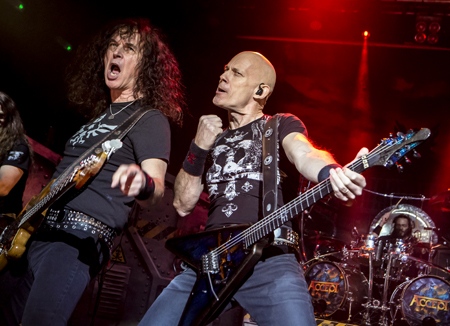 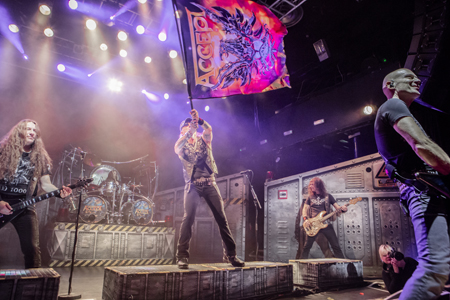 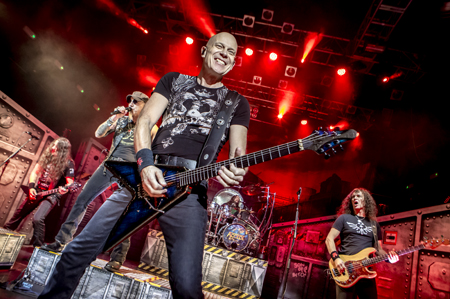 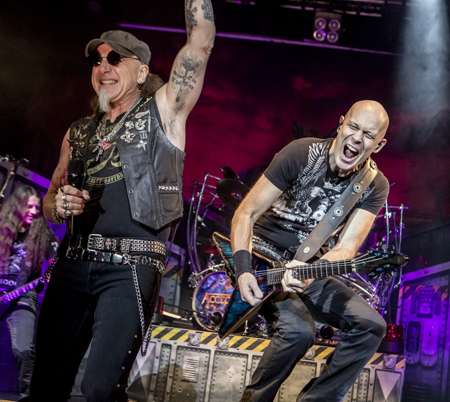 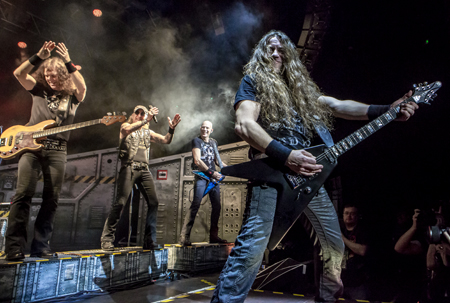 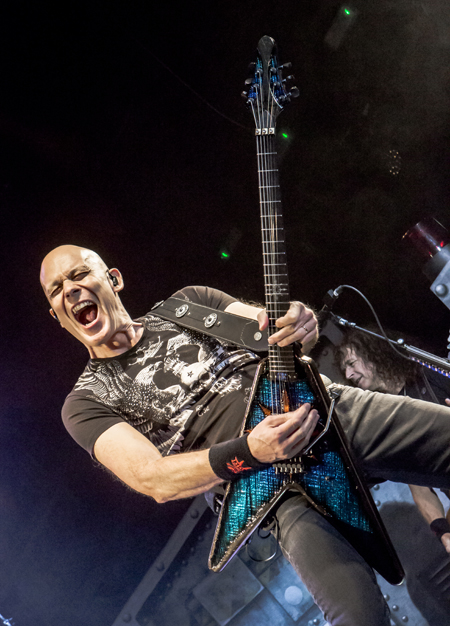 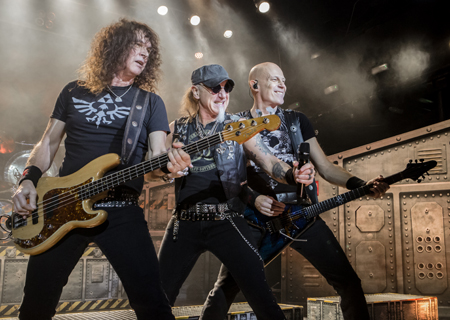 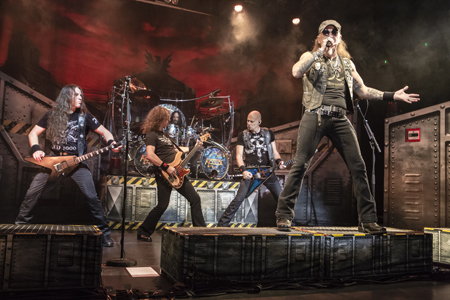 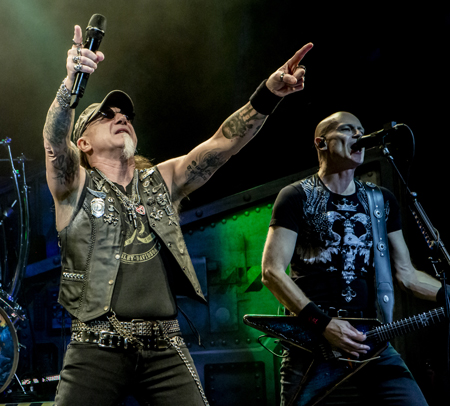 PAUL DI'ANNO ANNOUNCES FINAL LIVE PERFORMANCE TO BE AT BEERMAGEDDON