Dave was speaking to Jimmy Kay from Canada’s The Metal Voice about his upcoming induction into the Hall of Heavy Metal History, his new album with Altitudes And Attitude with Anthrax’s Frank Bello, his upcoming ‘More Life With Deth’, the direction of Megadeth’s new album and his upcoming Bass History tour.

Regarding Metallica’s 2001 shortlist, Dave said: “I know I was on Metallica’s short list.”

You can watch the whole interview right here:

When asked about his upcoming induction into the Hall Of Heavy Metal History on January 23rd in Anaheim, California, Dave said:

“Last year I inducted Nick Menza into the Hall; it was great because his family was there and it was a special privilege and honour, especially since Nick is no longer with us. So this year when the Hall’s CEO Pat Guesaldo contacted me for the induction, I thought it was great and super cool.

“The Hall does a great thing; they are honouring and inducting a lot of cool artists. They are inducting the Ozzy Osbourne Blizzard Of Oz artists, drummer Lee Kerslake and bassist Bob Daisley, also my friend Mike Portnoy ex-Dream Theater and so many more great musicians.

“I am especially looking forward to meeting Lee Kerslake who did the drumming on Ozzy’s first two albums, ‘Blizzard Of Ozz’ and ‘Diary Of A Madman’, because those two albums changed my life. Those two albums were very influential to me as a teenage musician.”

‘Get It Out’, the debut album from Altitudes And Attitude, Dave’s collabration with Frank Bello of Anthrax, is released on January 18th 2019 via Megaforce Records. UK tour dates have been confirmed for February 2019 and you can check out the lyric video for ‘Out Here’ below.

Catch Altitudes & Attitude live in the UK at the following dates: 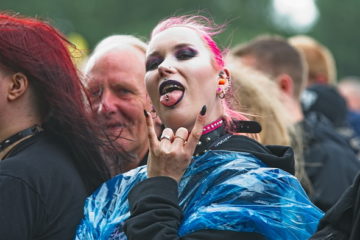