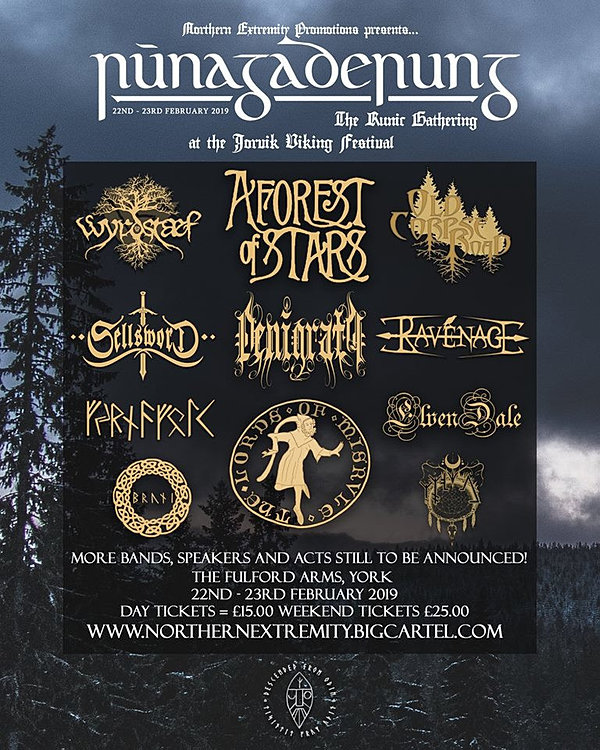 Historically inspired Metal and heathen folk is set to take Viking York by the horns. Every February, the townsfolk of York, UK and history enthusiasts nationwide come together to celebrate the city’s rich cultural heritage and Norse history at the Jorvik Viking Festival.

Proudly sponsored by Descended From Odin, a heathen music festival hosted by Northern Extremity Promotions has recently been announced in celebration of our pagan past.

​Rúnagaderung, the Old English word for The Runic Gathering, is a weekend long musical event which celebrates the rich history and mythology of early Northern Europe, from the mysterious petroglyphs and hidden secrets of the Nordic Bronze Age to the grim poetry of the Anglo-Saxons and the epic sagas of the Vikings.

​The event will be held across Friday 22nd and Saturday 23rd February 2019, alongside Viking week, at the Fulford Arms in York, North Yorkshire. The gathering takes place over two days, with the Friday being dedicated to a selection of some of the best historically inspired folk, neo-folk and dark ambient bands that the United Kingdom and Scandinavia will have to offer.

The Saturday brings an onslaught of Metal to the city of York. Covering a broad range of the Metal spectrum, Rúnagaderung brings historically influenced black, extreme, death and power Metal bands from across the country to take part in the closing blót.

Confirmed artists include one-woman harpist Yylva, storytellers Old Corpse Road, York-based Norse folk quartet Bruni, and Prophecy’s avant-garde A Forest Of Stars, with many more bands yet to be announced.

One of the most highly anticipated bands participating in Rúnagaderung’s stellar line-up is local act Wyrdstæf. In April 2018, the band were featured on a Channel 4 documentary exploring the Viking history of the city of York and received outstanding reviews of their debut performance at Warhorns Festival.

Previous article
NIGHTWISH CELEBRATE DECADES OF SYMPHONIC METAL AT WEMBLEY ARENA
Next article
DAVE ELLEFSON: “I WAS ON METALLICA’S SHORTLIST!”