25 years ago yesterday, Rammstein emerged from Berlin with their debut album, Herzeleid.

And this 4 December, the band will release a limited edition remastered version of their groundbreaking album.

Herzeleid (XXV Anniversary Edition – Remastered) will feature the album’s original tracks on a single CD, housed in a lavish, cross-shaped digipak with deluxe slipcase and, for the first time ever, the remastered album with HD sound will be available digitally.

In addition, there will be a two LP version with a slipcase containing two 180 gram heavyweight black vinyl discs with blue splatter effect. The creator of the original artwork, Dirk Rudolph, is also responsible for the Anniversary Edition packaging.

The booklets also contain the original band portraits shot by Praler. Both the CD and vinyl editions are strictly limited.

Marilyn Manson’s latest album We Are Chaos has charted at number eight in the Billboard Top 200 in its release week. This is Manson’s eighth consecutive album to chart in the Top Ten.

Manson has just release a video for the track ‘Don’t Chase The Dead’, which stars Manson alongside Norman Reedus.

Twister have released the second single, ’64 White Lies’, from their upcoming debut album ‘Cursed & Corrected’, which is scheduled for release 13 November.

TesseracT are to release a deluxe vinyl version of their 2013 album ‘Altered State’ on 6 November 2020, via Century Media.

This 4LP+2CD set collects the original album together with the instrumentals, the latter of which have never been released on vinyl.

The band told MetalTalk: “For the band, we always felt like we hit a perfect balance with the presentation on Altered State. And that the concept was made even more striking in a gatefold vinyl package.

“There’s just something very tactile and real about that iteration.

We’re all really looking forward to it being available in that format again.”

‘Altered State’ was the only TesseracT album to feature vocalist Ashe O’Hara, with the single ‘Nocturne’, above, reaching over 2.7 YouTube viewers.

Madre Sun have released a video for the track ‘Black River’, taken from their ‘Speed Of Light’ EP. The film includes clips sent in by their fans who had made videos of themselves rocking out to the bands music.

Featuring Brazilian brothers Matt and Eduardo Cavina and Tyson Schenker, the London based Classic Rock band saw their EP enter the Brazilian iTunes Album Chart at number fifteen, thanks to those local connections.

After Smoke Clears will release their debut album ‘Edification’ 12 November. The band have released five videos so far, with The Vine, below, set to be the opening track on the album.

Given the state of the world and lack of gigs, that they have managed to gather over 150k streams during a pandemic, shows that they are certainly on the ‘ones to watch’ list.

Hellripper have released the title track from their upcoming album entitled ‘The Affair Of The Poisons’, which you can see below.

The theme of the album is based on true life events from Glasgow in 1954 and explores the historical dark and insidious underworld of witchcraft and the occult.

James MacBain spoke with MetalTalk about the track: “The song takes inspiration from a series of events that occurred in 17th Century France.

“Possession, witchcraft, child sacrifice and poisonings were at the heart of a large-scale investigation conducted during the reign of the Sun King (Louis XIV) after an extensive plot was unearthed within the court of Versailles, targeting members of the aristocracy and the King himself, in order to gain power and influence.

“The scandal exploded when it was revealed that the royal favourite herself was partaking in black masses and had allegedly poisoned a younger rival to win back the King’s favour.” 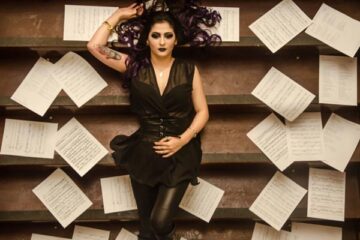