The ever-busy Swedish Atmospheric/Progressive/Sludge Metal six piece Cult of Luna return with another new EP, ‘The Raging River’. It it their first album on Red Creek, the band’s newly created record label. Distribution is by Metal Blade Records in North America and Season of Mist in Europe).

The band said: “After more than 20 years of touring, releasing albums and experiencing different kinds of deals and aspects of the music industry, we believed that it was the right time for us to seek more freedom and to reduce the distance between us and our audience.

“So, in 2020 Red Creek was born. It has been created as a safe home for our art, but we wanted to do more and offer our experience, expertise and network with the artists we love and believe in.

“‘The Raging River’ feels more like a bridge. A midpoint that needs to be crossed so we can finish what we started with 2019’s ‘A Dawn to Fear’. It has been an interesting, as well as an introspective, way of working, having our instinct leading the way and then having to figure out where it takes us.

“But not only has it been a linear journey; some aspects of it are also clearly circular.

“For example, we have been a fan of Mark Lanegan for many years. So, in 2005, when we wrote the song ‘And With Her Came the Birds’, we had his voice in mind and the working title was ‘The Lanegan Song’.

“But our lack of self-confidence prevented us from even daring to ask. It took fifteen years for us to get the guts to ask him. Hearing his voice on ‘Inside Of A Dream’ is nothing more than feeling that we’re inside of a dream.” 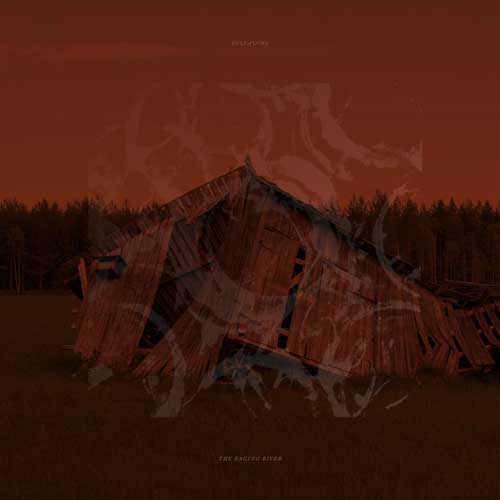 ‘The Raging River’ is a five track EP that covers a hefty thirty-eight minutes, in true Cult of Luna style.

Situated midway through is the previously mentioned ‘Inside of A Dream’ featuring Mark Lanegan, which is the album wildcard It is a large step away from what I would normally expect from a Cult of Luna track, but it is well composed and delivered.

The remaining four tracks are also all superb pieces in their own right and echo that more familiar dark hauntingly atmospheric sound you associate with Cult of Luna.

The hypnotic, yet powerful opener ‘Three Bridges’ has it’s sublime meld of a slightly industrial undercurrent and brutal suffocating waves set against a hint of a gothic overtone, with wistfully melodic swathes completed by searingly raw vocals. It is a magnificent track that encompasses everything that, for me, says Cult of Luna at their finest. A hugely moving and powerful opening piece.

‘What I Leave Behind’ is sludgy and doomy, building in engagingly hypnotic waves, dropping back to allow the raw vocals to break through and course through it all. There is some impressively precise and well considered drum work which really adds to the sound, making the most of the haunting Progressive Industrial tinged undercurrent.

‘I Remember’ has a wonderful variance to its content. One minute a raw semi symphonic sludge-fest, the next a hauntingly sublime oasis of reflection, lifted by jangly closing leadwork.

As a complete unit it is superb and the closing track ‘Wave After Wave’ begins as a monochromatic soundscape, beautifully punctuated with precision drum work, but morphs into the sublimely psychedelic and subtly sonic, with crushing waves that pound through and raw vocals slicing into the music. There is the merest suggestion of artificially generated “whale song” in the second half and this is a darkly enchanting and entrancing piece that makes you want to listen to the whole EP all over again.

‘The Raging River’ is just one more superb addition to the Cult of Luna catalogue.

A powerfully engaging and thought-provoking listen.