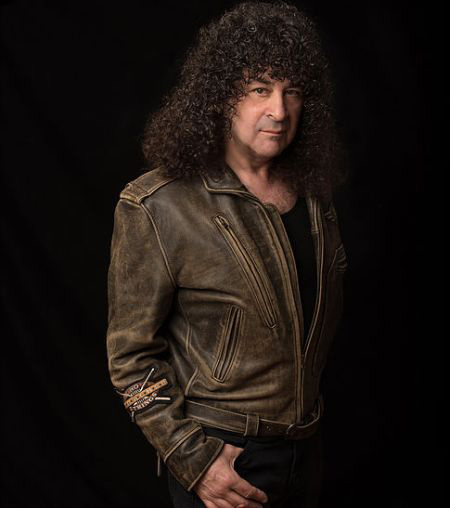 When I call him a drummer, I’m really only scratching the surface of his talents. He’s a Berklee trained multi-instrumentalist, singer, songwriter and producer.

Now here he is solo and what a musical dream it is: reminders of seventies bands such as ELO, Cheap Trick and Queen flow seamlessly, it’s hook laden, catchy and unsurprisingly for a drummer’s solo album the groove is powerful throughout.

When I say it’s got a very seventies feel, we shouldn’t be surprised as Hirsh is a contemporary of these guys. His pedigree goes back to New England’s US Top 40 hit of 1979, ‘Don’t Ever Wanna Lose Ya’, an era when they shared the stage with Kiss and Cheap Trick.

As I listened to the album, I had Hirsh on messenger. It’s nice to get responses from the man himself to my thoughts as we go along and I’ve had the album on repeat since. ‘If You Need To Talk’ is my current new favourite song of all time.

So Hirsh, how many instruments are you playing on this record?

“When I’m writing the songs I pretty much play everything. I’ll usually start with a click track and then just lay down a keyboard track or a guitar track and then sing a scratch vocal. Once I get the arrangement to be where I want it I lay in the drum track.

“I’m not that great a guitar player and I certainly don’t profess to be but if the guitar track I lay down has a great groove to it and fits the track I’ll keep it. I love it when I have a ‘real guitar player’ come in, listen to my parts, and then lay down that killer, keeper guitar track. So for the most part part I am playing drums, guitars, synthesizers, some bass and synth bass and of course all the vocals are yours truly.”

Did you do all the vocals? Even the acapella on ‘Love Is’?

“Yes, that’s actually about 48 to 60 tracks of me singing. I absolutely love acapella!”

Where did you record the album?

“I have two studios, one at home and then I have my real studio in Cambridge, Massachusetts. The room at the Cambridge studio was designed by Michael Blackmere and sounds absolutely fantastic. That’s where I do all my mixing.”

What inspires you to keep making music?

“It’s just what I do, Chris. It’s who I am. I can’t go a day without picking up a guitar or playing the piano or wailing on my drums or singing. I feel very fortunate that I have been doing this for so many years.

“I also listen to a lot of music which is truly inspiring. I was at home one Sunday afternoon in the studio watching some YouTube videos and came across a performance by Gary Brooker of Procol Harum doing ‘Whiter Shade Of Pale’. I was so blown away by Gary’s performance. It was somewhere in Europe and on stage he had a full orchestra, choir, guitar, bass and drums and Gary playing piano.

“I was so inspired by that performance that I jumped out of my seat, went over to my piano and laid down the basic tracks for the version of ‘Whiter Shade Of Pale’ that you here on my album. It truly was a moment of inspiration for me and I also felt it necessary to pay tribute to Gary’s performance of that incredible song.”

Songs like ‘If You Need To Talk’ deserve to be a hit. Perhaps back in the 70s or 80s that could have been a hit for bands like New England. Does it not make you despair seeing the state of the industry these days, in that you know it won’t get the budget for promotion that it deserves?

“Well, let’s think about this; back in 1979 New England had a smash hit single in ‘Don’t Ever Wanna Lose Ya’ and unfortunately that song never reached the heights that it should have. So even back then I believe that we all reached a level of despair after putting out three really cool albums and not getting the promotion we deserved.

“And like I said, for whatever reason we never realised the dream that some others realised, like our contemporaries; Electric Light Orchestra, Aerosmith, Cheap Trick and the Bon Jovi’s of the world.

“I am absolutely thrilled that folks like yourself and others who have most recently listened to this album are coming back with incredibly positive feedback. You have no idea how much that means to me.

“Sure it would be lovely to have a hugely successful album that sold tons and tons. In today’s fucked up music industry that’s not even happening for folks like Metallica or any of the other artists in my genre.”

How do you go about getting a guy like former Guns N’ Roses guitarist Bumblefoot on your album?

“Bumblefoot and I met a few years back. I actually don’t recall how, but he came to a show that I was performing on in New York City with my bandmate John Fannon. He told me that he was such a big fan of New England and I was quite humbled by his comments about the band. We stayed in touch and as I was working on the song ‘Git It Back’, I thought to myself, wow this would be a perfect vehicle for him.

“I shot off a quick email asking if he was interested and of course he replied positively. I sent the track with the simple instructions: Ron I want the first one minute of the song to be all about you, screaming guitars, dive-bombs, a lead solo from hell. It’s a signature piece for you.

“He sent the track back a few days later and I dropped it into my session. Upon first listening I broke out laughing hysterically because what he had played absolutely blew me away. He is so amazing and just turned the song into something far more than I had expected.

Who else contributed and who was your most valued player?

“I’m really fortunate to be surrounded by such incredibly talented musicians. Firstly my go-to guitar player is Joe Feloni. Joe actually accompanies me on my solo gigs, so it’s just him and I on stage. Whatever direction we need to go in to make the song happen, Joe does it.

“I’m also fortunate to be able to rely on my bandmate in New England, Jimmy Waldo. Jimmy is featured on Hammond Organ on ‘My Brain Needs A Holiday’ and also many of the other tracks where he plays mellotron, synth, piano etcetera.

“‘If You Need to Talk’ features Richie Ranno from the group Starz on lead guitar and the rhythm section is totally beefed-up by my buddy Bruce Bennett with a Les Paul and a Marshall stack on ten.

“Jon Butcher, another very well-known and respected guitarist, appears on the song ‘Love Is’, as does my buddy from Los Angeles Joel Burns.

“I can’t forget Jodee Frawlee who does amazing work on ‘Diamond Moon’ and of course Gary Smith from the group Vice on keyboards in the song ‘Sister Jane’. Joe Mudarri and Steven ‘Dudacus’ Baxter on bass on a few tracks round out the team. Oh yes, J Rushwell on guitar on the song ‘Shadows’.

“So you can see I had plenty of help.”

Who’s that doing the shredding solo on ‘Sister Jane’?

“That is my buddy Joe Feloni. You can see why I want him by my side when I do my solo shows. He legitimizes the music that we play, ha ha!”

You weren’t tempted to ask your old bandmate from Warrior, Vinnie Cusano (aka Vinnie Vincent from Kiss) to contribute?

Talking briefly of Warrior, Hirsh told us his side of the story of the band Warrior that he formed with Vinnie Vincent in 1982 in my previous article here“.

I notice there is an upcoming release of the Warrior demos with some rehearsal recordings of a singer called Fergie Fredericksen, who did backing vocals on Survivor’s ‘Eye of the Tiger’. What do you remember of him?

“Fergie was a singer that had been involved in a couple of name bands prior to auditioning for us in Warrior. I really don’t remember much about the guy but I can tell you that I was not completely impressed with his voice. We also audition Robert Fleischman who had and still has an amazing voice.”

Going back to your album, ‘Diamond Moon’ is a classic ballad. Where did the inspiration musically come for it?

“I think that musically that song is a real departure for me and one of my friends that listened to the album called it eclectic. I love listening to different styles of music and Steve Winwood has always been an influence of mine. A lot of the percussion that I played in ‘Diamond Moon’ is reminiscent of Winwood’s ‘Higher Love’ era songs.”

Are there any plans to tour the album or maybe play a couple of songs from it in New England’s live set?

“I’m actually doing quite a few gigs right now in the US but keeping it to just Joe and myself. The set really does rock out with just the two of us playing. I’m on acoustic guitar, piano and vocals and Joe takes care of all the electric stuff. I think I would love to put a band together so maybe that’s the next step. We shall see.

“And no, I don’t think New England will be doing any of my songs.”

How is New England going, by the way?

“We absolutely love playing together and unfortunately, because we’re so spread out around the country we can only make that happen once or twice a year.

“But the good news is on October 7th we’re going to be doing a gig in LA at a venue called Grand Oaks live, and then a week later we have two dates here in the New England area, one at the Spire Center in Plymouth, Massachusetts and the other at the Bull Run Music Theater in Shirley.”

“I have a funny story that actually takes place during the ‘Dynasty’ tour but we did jump off that tour to play a few shows with the ever lovable John Cougar Mellencamp.

“Cougar had a reputation as a real hothead. And as I understand it he was kicked off the Kiss tour just prior to joining up with New England. Obviously he knew that we were involved with Kiss because of our connection with Paul Stanley producing our first album and Bill Aucoin, who managed Kiss, also managed our band.

“To make a long story short, they treated us miserably the whole time. At one particular show they burst into our dressing room demanding to use our bathroom just after we had completed an extremely hot set.

“Cougar was incredibly obnoxious and prompted me to jump up with my bottle of Southern Comfort and try to whale it into his head. Fortunately for both of us we were separated and they left the dressing room without being allowed to use our restrooms.

“Years later I met Kenny Aronoff, the drummer in the band, and Kenny looks at me and says: ‘Man, you look familiar’.

“And I said: ‘Oh yeah, do you remember the gig in Ohio and the fight that ensued in the dressing room with the band New England?’

“Kenny was like laughing because he remembered the situation like it were yesterday. We both hugged and became fast friends after that.”

In summary my advice is go to Hirshgardner.com, admire some photos of this handsome man and buy the album. In fact you can download ‘If You Need To Talk’ or any other track for 79p, so do yourself a favour. I spent more than that on a packet of crisps recently.

Hirsh recording vocals on ‘If You Need To Talk’.