Since their 1990 debut album ‘Eaten Back To Life’, Cannibal Corpse has been at the forefront of the Death Metal scene as true innovators, who have become the best selling Death Metal band of the Billboard Soundscan Era in the process.

Now in 2021, their brutal legacy continues to grow with the release of their fifteenth studio album.

Released via Metal Blade Records, Violence Unimagined will be unleashed on the masses on 16 April with eleven tracks that promise to please every Cannibal Corpse fan.

The album catches their classic sound while simultaneously pushing the music forward in terms of heaviness and at times technicality and even hooks. 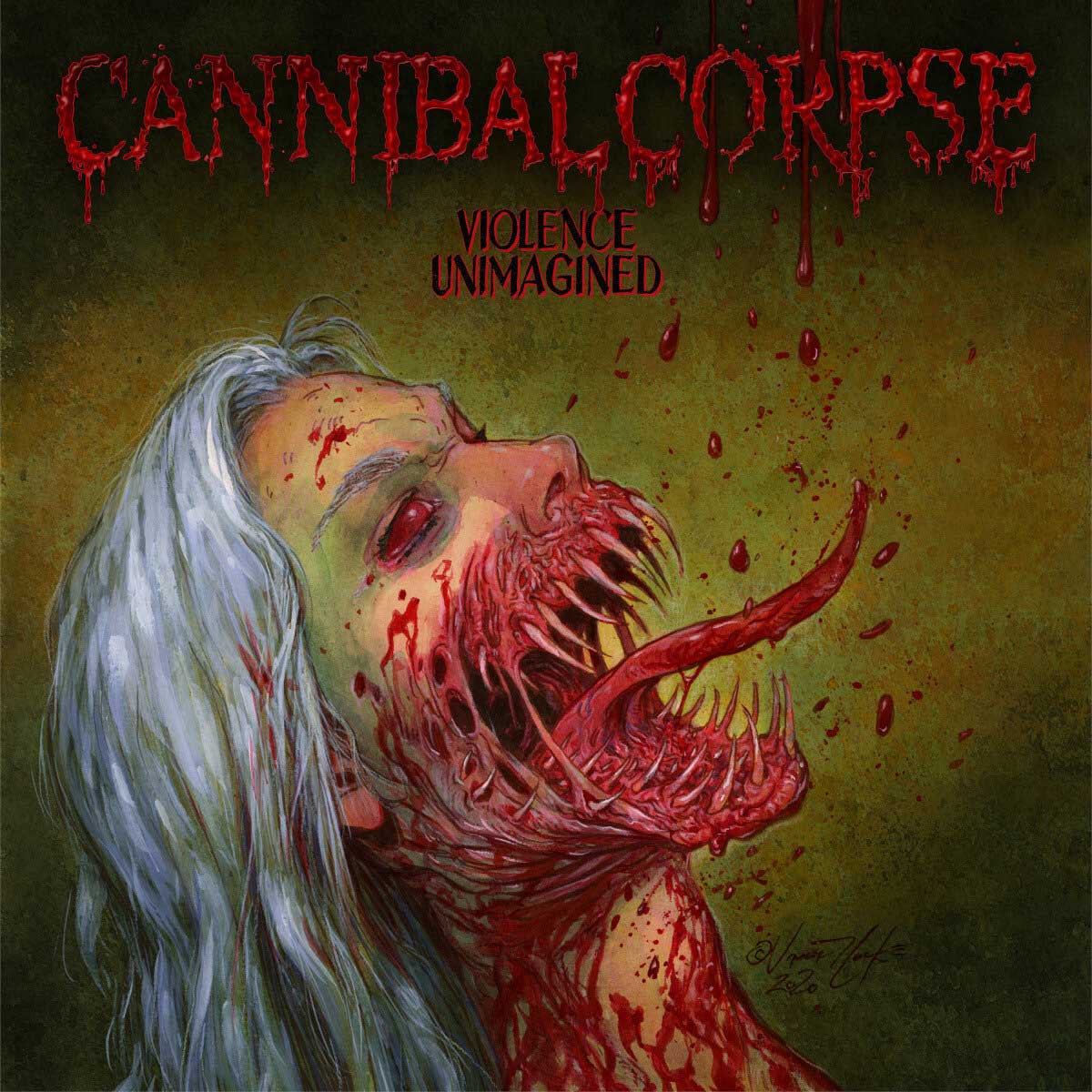 The album rips from the start with the opening track and latest single ‘Murderous Rampage’, that sounds as the song title probably suggests- brutal, heavy, and fast. It is an unrelenting way to start, with the pummeling drums of Paul Marzurkiewicz driving the music forward and the classic growls and screams of George “Corpsegrinder” Fisher ripping through the brutality of the riffs.

There is also an incredible amount of groove throughout the song that will make you turn your furious headbanging into fist bumping on a moment’s notice.

The brutality continues straight into ‘Necrogenic Resurrection’ that slows down into an evil, almost Doom Metal breakdown at the 1:30 mark. The song eventually picks back up and explodes into a guitar solo that sounds like a more melodic Kerry King; the solo is singable, but still one that sounds like it is moaning and screaming from Hell, just like you would expect from Slayer, who has been a career long influence on Cannibal Corpse.

These opening songs provide the perfect one-two punch that sets the tone for the rest of the album and showcase a truly tight delivery from all band members.

The bulk of ‘Violence Unimagined’ is filled with soon to be classics and fan favourites, including the first single ‘Inhumane Harvest’.

More of a mid-tempo track, it is filled with groove, subtle melodic passages and continues the overall aggressiveness of the record in terms of heaviness and subject matter.

A couple songs later, ‘Surround, Kill, Devour’, is another soon to be fan favorite. A track penned by bassist and co-founding member Alex Webster, the song is anchored by a great and super heavy vocal hook. Before even one full listen, you will surely find yourself screaming along to the song title each time those three words are screamed and growled.

Speaking of Alex Webster, he has the opportunity to showcase some killer bass licks on the track ‘Follow The Blood’. This one is a true highlight of the album with constantly shifting feels and tempos. It is arguably one of the more progressive songs in the Cannibal Corpse catalog and showcases how technical the band can be at their respective instruments; without the technicality ever getting in the way of the superb Death Metal songwriting on display.

On ‘Violence Unimagined’ the band stays within the boundaries of what you would expect musically from a Cannibal Corpse album. Let it be clear though this is not a criticism; as a fan of the band I want to listen to the classic Death Metal sound that they helped innovate.

I do not listen to Cannibal Corpse for ballads, a fusion of musical genres, or anything all that experimental.

With that said, the band is not playing it safe, which they easily could do at this point in their career. Instead they find ways to push the line of where their musical boundary is without ever going over the line.

With the heaviness and at times technical aspects of the music, not to mention the controversial horror movie inspired lyrics and imagery, Cannibal Corpse have never played it safe and they are certainly not starting now.