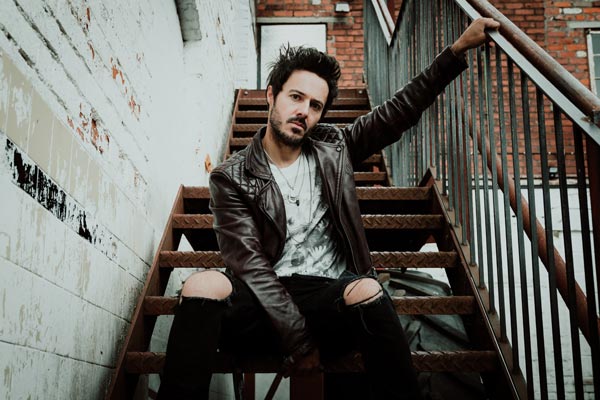 James Kennedy recently released his cracking album ‘Make Anger Great Again’, a Heavy Alt Rock slab of genius which, even though it was recorded before lockdown, is pretty damn relevant for right now. He has also been storming the Amazon book charts with his book ‘Noise Damage’.

While he may have seen the back of Donald Trump, James says there is plenty of comedy yet to have with Boris.

Although Trump eventually proved himself useful. YouTube and Facebook initially blocked the video for ‘The Power’, due to the content of the film used [film which came from YouTube], so every time Trump tweeted, “I would comment and add a link to the video there. It got 14,000 views, just on the back of that.”

‘Make Anger Great Again’ is James’ “first, out of the gate, solo album” and with the prospect of COVID-19 regulations beginning to ease, there are plans to take the album out on tour. Of course promoting an album during these times was challenging, James says he “has had enough of the house. I just want to get out playing the thing.”

With the ‘Noise Damage’ book, which incidentally is an excellent read, James explains his motivations for writing it and how important a good editor is, recounting an earlier tour of Canada which, for James remained a good memory, but digesting the detail behind the whole episode with someone else, does seem quite the opposite. So, for example, this improved the direction of the chapter.

The success of the book has lead to working with a literary agent, with James teasing plans forming for a second book which covers some themes of ‘Noise Damage’, but is not connected directly to it.

As for the next solo album, “it would break my heart to have a second album that I could not tour”, so it is full throttle on getting the band gig sharp for when dates can be arranged.

All this and more in MetalTalk TV Episode 34:

Kris Barras - Interview - MetalTalk MTTV - Episode 59. "I've been enjoying getting out there and seeing people's faces up close."