It may have been a Brrr fest outside, due to the return of winter temperatures, but inside the ever-popular Dome in Tufnell Park there was a wonderful warm sense of bonhomie. Rock fans from far and wide assembled at the popular annual fundraising event, named in honour of Clive Burr, Iron Maiden’s drummer from 1979 to 1982, who sadly succumbed to MS in 2013.

Noted for his swaggering, high-energy playing that combined punk attitude and classic rock style, Clive is still cited as an important influence by drummers that eventually rose to prominence in their own right in bands including Slayer, Anthrax, Machine Head, Testament, Helloween and Iced Earth.

With burgeoning attendances at the first two Burr Fests at the Kolis Club in Archway, for its third incarnation, organiser Andy Holloway and his trusted lieutenants set their sights to aces high and upgraded this year’s gathering to the much larger 500 capacity Dome in Tufnell Park, North London. 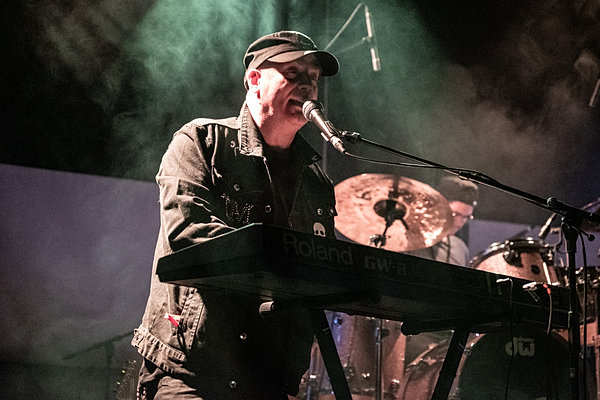 With the strongest line-up to date and a bargain entry price of £15, the venue was already full when opening act and Burr Fest stalwart Tony Moore and band hit the stage. Tony is well-known amongst the Iron Maiden fraternity as the first and only on-stage keyboard player for the band, as part of a short-lived 1977 line-up of pre-deal Iron Maiden that also featured the infamous Barry ‘Thunderstick’ Purkis on drums.

To the wider music community he’s a well-respected advocate of new music and young talent, through his long-running events including the Kashmir Klub and new artist nights at The Bedford in Balham. He’s also a talented musician and songwriter in his own right, as revealed by his accomplished and eclectic opening set that spanned keyboard led ballads and AOR style rock anthems.

He peaked with his customary cover of Cutting Crew’s ‘(I Just) Died in Your Arms’, as his career included two years as touring keyboard player for Nick Van Eede’s still beloved band. 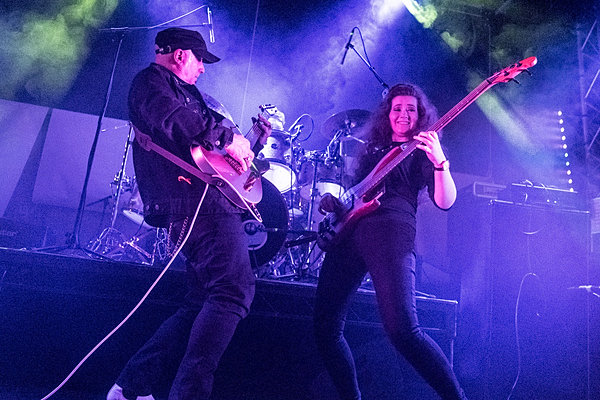 With the crowd suitably warmed-up, they were ready to dive into the deep end with a set from a band that emerged in 2013 from the ashes from east-end 80s heroes Deep Machine and Strutt. In true, NWOBHM style, Deep Machine went through many iterations, line-ups, break-ups, false dawns and reformations until the engine eventually seized-up in 2015, with Bob Hooker the last man standing from the renowned 1981 line-up.

In parallel, in 2013 other DM alumni vocalist Tony Coldham and Paul Smith had joined forces with fellow Strutt man Mick Feleppa to establish a new band dubbed The Deep. Resurrecting material originally written back in NWOBHM days, they released the well-received ‘Premonition’ album in 2015, which provides the backbone of the band’s set with ‘Night Stalker’, ‘The Rider’ and ‘You Take My Breath Away’ full of archetypal galloping rhythm, crunching riffs and soaring vocals. 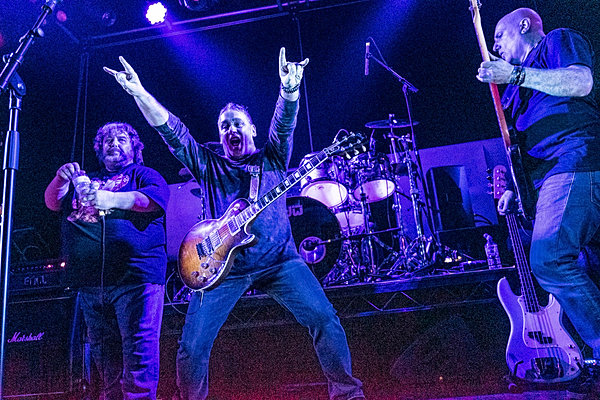 In late 2018, augmented by current rhythm section of Alan Mogg and Pete Reeve, the band released the ‘Watching You’ EP which included four new songs, three of which featured tonight, with ‘Prepare To Rock’, written as a tribute to those murdered at the Bataclan terrorist attack in Paris, powerful and poignant, with Coldham’s cold-harmed voice still impressive and triumphant.
Despite their long pedigree, the band played with youthful energy and precision and were rightly acclaimed by the appreciative crowd, ensuring that all members of The Deep ended on a high. With a new album on the way and a clear appetite to perform at the top level, their ongoing success is as assured as it is deserved.

The key feature of the first two Burr Fests was that most of the bands were members of the Iron Maiden family tree, including musicians that had been part of the early pre-deal history of the band. Buffalo Fish with Terry Wapram, Airforce with Doug Sampson, Lizard with Terry Rance, Thunderstick with Barry Purkis for example and this year’s main bands certainly have strong Iron Maiden connections, but have achieved considerable success in their own right and provided the secret sauce for Burr Fest 2019 that resulted in a record number of attendees at this most worthy event. 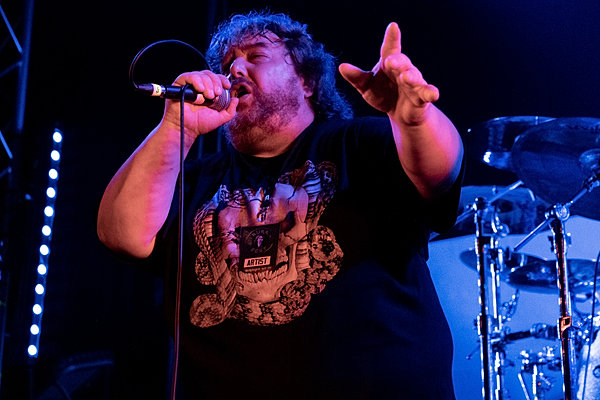 Praying Mantis, like all good NWOBHM-era bands have an army of former members, including Maiden alumni Paul Di’Anno, Dennis Stratton and most significantly Clive Burr (1983-1985). Yet the core duo of Troy boys, Tino and Chris, has remained constant since the band’s original hatching in 1974.

It’s notable that the current line-up since 2013 of Chris, Tino, Andy Burgess, Hans In T Zandt and John ‘JC’ Cuijpers is now the longest standing of their career to date. It’s no coincidence also that the two most recent albums, 2015s ‘Legacy’ and 2018s ‘Gravity’ contain some of the best work of their career. Not only that, the addition of the Dutch duo has injected real dynamism into their live performances, with Jaycee’s voice a consistently potent melodic weapon.

Although their set was necessarily shortened to preserve Jaycee’s flu-ravaged larynx, this did not detract from the superlative quality and Dutch courage of the performance. Mining tracks from the golden era of their seminal debut album, ‘Time Tells No Lies’, including ‘Panic In The Streets’ and favourites from throughout their career such as ‘Time Slipping Away’ and ‘Letting Go’, there’s no way this band could fail to delight and entertain. With Andy’s lithe leads, Tino’s ripping riffs, Chris’ bottom-end clout propelled by Hans’ fleet feet and snappy sticks, after all these years, this is a band at the height of its powers. 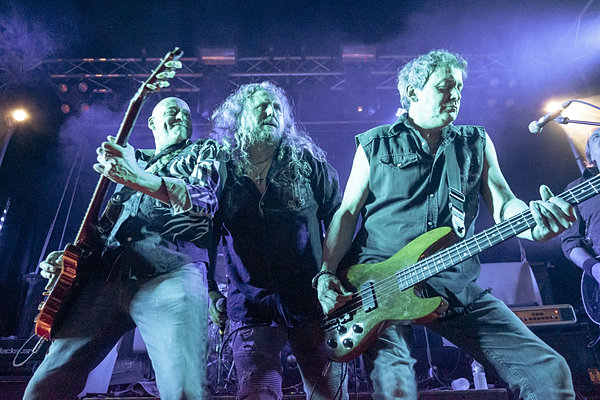 However, it’s not simply their instrumental acumen and cohesion that sets them apart – it’s the rich catalogue of songs. In truth, although rising to notoriety during NWOBHM days, they have very little in common stylistically or song-wise with the beer-bellied bluster of so many of their contemporaries. The strong vocal harmonies and the melodic structure of their songs set them apart.

Were it not for the endemic instability of their line-up during their early career, they may well have risen to the upper divisions where Leppard and Maiden continue to reside.

Surprisingly, ‘Keep It Alive’ was the sole representative from their excellent current ‘Gravity’ album, but it was great that they returned to the ‘Highway’ from 2015s consummate ‘Sanctuary’, as if they needed a further Iron Maiden reference embedded in their set. 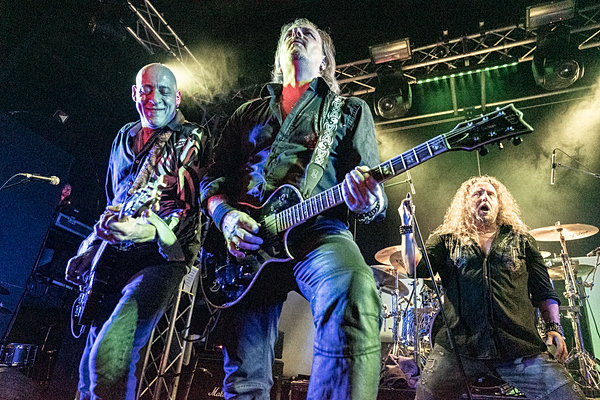 With Jaycee manfully reaching every single note that the songs demanded, despite shortness of breath, the final song came not a moment too soon. ‘Children Of The Earth’ remains a composition of unparalleled majesty in the Mantis songbook and provided a fitting close for a great performance of a band who had played their hearts out in celebration and memory of their fallen former bandmate.

Let’s not forget that Clive also worked with Chris and Tino when the ‘Turn The Tables’ line-up of the band morphed into Escape and then Stratus in 1984. 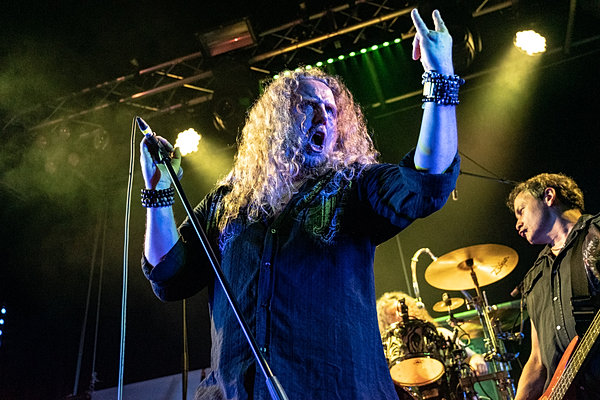 Headliners Maiden uniteD were formed by mainstay Joey Bruers in 2006 as an acoustic collective to perform the songs of Iron Maiden. Originally, featuring name musicians, including Ruud Jolie (Within Temptation) and Damian Wilson (Threshold, Headspace), the number of associated band members continues to grow to accommodate schedules and parallel commitments.

Compared to 2017s awe-inspiring gig at the Camden Underworld, founder member Joey and regular guest Dennis Stratton were the only familiar faces tonight. Given the quality of the arrangements and the high standard of musicianship in the band curated by Meneer Bruers, tonight’s performance was every bit as good as those that have gone before.

The biggest surprise was the presence of Gamma Ray vocalist Frank Beck, filling the considerable Misérables’ shoes of Damian Wilson. Not only does Beck bear a passing resemblance to a beardless Damo, his effortlessly strong voice and supreme range immediately won over the crowd by the close of the opening pairing of ‘Aces High’ and ‘2 Minutes To Midnight’. 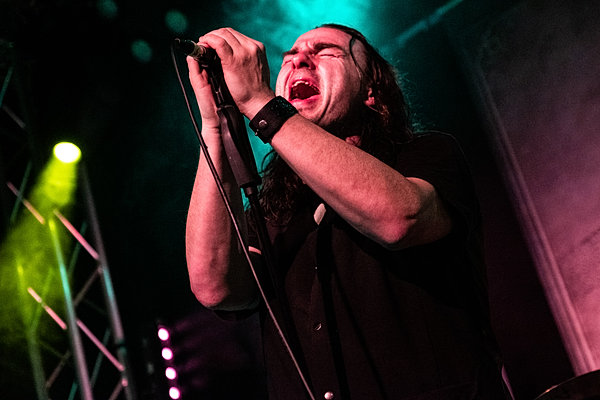 As ever, the mix of tracks from across Maiden’s career was impeccable from the ribald and raucous ‘Charlotte The Harlot’ from their incendiary debut to the dystopian Blaze-era ‘Futureal’.

Ironically, for Burr Fest, Joey made the bold move to cover only three Clive-era songs in the set; the aforementioned ‘Charlotte…’, theatrical opening song ’22 Acacia Avenue’ and the dark and dramatic ‘Children Of The Damned’, with Beck’s voice a Gothic delight and Stratton’s strumming, beaming smile and strong backing vocals adding real personality whenever he was on-stage.

In fact, there was a method with this playing with madness, as the dropping of customary early classics, like ‘Prowler’ and ‘Strange World’ provided the necessary space to accommodate Bruce’s epic ‘Empire Of The Clouds’ from Maiden’s genre-busting and chart chomping 2015 masterpiece of mind, ‘The Book Of Souls’. This is even more remarkable when you realise that Iron Maiden themselves have never performed the song live and when asked in interviews about the futureal possibility of adding it to the set, Bruce has always stated that it’s highly unlikely. 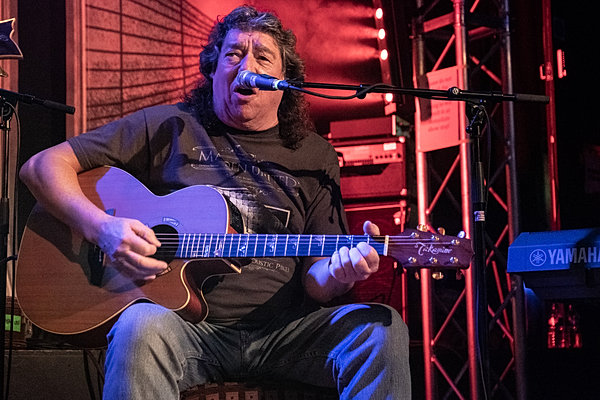 Observant and teetotal souls in the crowd might have spotted the large clue that this song was coming, from the large stage backdrop depicting the ill-fated R101 airship.

Once touted as the future of civil aviation, the dream died on the fateful day of 5th October 1930 along with 48 fatalities, including Lord Thomson, the Air Minister who had evangelised the technology.

The story carries a real resonance for Bruce given his high profile involvement and six-figure investment in British aerospace company Hybrid Air Vehicles (HAV), which has developed a 300ft long helium-filled Airlander airship and are looking to make safe HAV travel a commercially viable and ecologically sound form of international passenger transport. 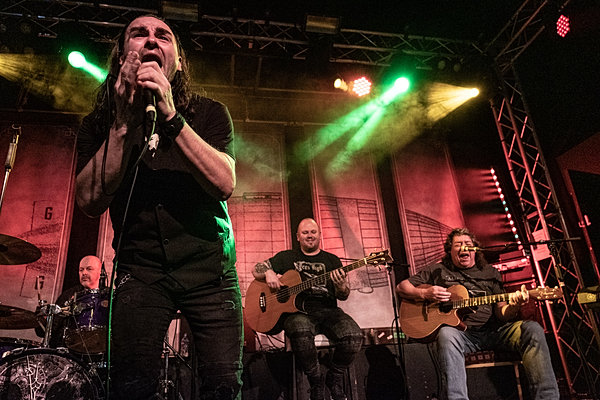 Bruce’s Aviation Rhapsody is a dense and stunning piece of music on record, but it can take a few listens to appreciate its soaring majesty. As such, Joey cleverly opted to split the piece into four more digestible parts that were spread throughout the set, which proved to be the Dutch feller’s masterstroke.

Hardcore Maiden fans in the crowd were ecstatic at the chance to hear the song played live for the first time and others were able to appreciate this underappreciated baroque and roll banquet of sound in tasty bite-sized chunks.

A fiery version of ‘The Evil That Men Do’ prefaced the final part of ‘Empire Of The Clouds’. Although, an acoustic interpretation, the malice in the lyrics was conveyed with attitude that spoke volumes. Main guitarist Daan Janzing’s fluid and dynamic playing revealed him as the unzung hero of the band in the way he added real zing to every song, particularly given that Dennis was on stage for less than half the set. 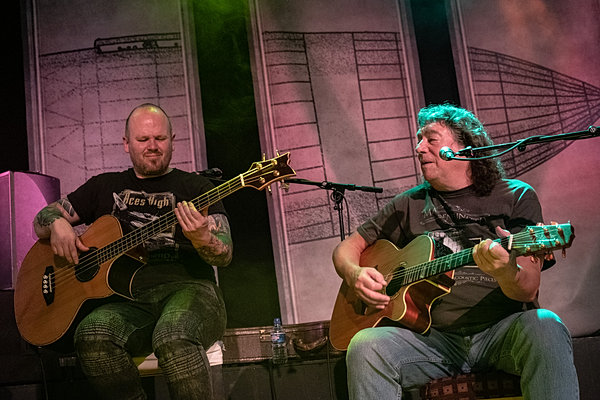 It had indeed been a spectacular success for all concerned. The attendance was unprecedented, the choice of bands and performances were uniformly excellent and the camaraderie in the room was truly heartwarming.

Even the small details, like the range of beers, the bar and security staff, the range of merch and the fabulous playlist provided by the awesome ladies of ‘Born Again – Heavy Metal Soundhouse’ were top-notch. This is great news for the MS Action Trust Ltd, which is the primary charity that benefits from the proceeds of this event, and also those that chose to attend and those that almost made it, whose appetites must surely be whetted for next year.

The bar has shifted higher, but based on this year’s event, the future of Burr Fest seems assured with plans already afoot to make Burr Fest 2020 the best yet.

The lure of the Burr is simply irresistible.

The Deep setlist:
Premonition
The Rider
All I Want
Night Stalker
Out Of Touch
When The Rains Came
Dead Man Walking
Prepare To Rock
Taking Over
You Take My Breath Away