Much maligned at the time, people said that, after an untouchable run of six classic albums, the wheels had finally come off of the Heavy Metal locomotive that was Black Sabbath with the 1976 release of Technical Ecstasy.

The truth is that the band were in a difficult position, faced with the process of repeating past glories that would please the fans or trying to do something new and therefore stretch themselves as artists even further.

The truth lay somewhere between these two, consciously expanding their sound whilst still able to lay down something utterly primal and earth-shaking. Time has been kind, though and whilst this may not be in the same mould as previous releases, it still remains an album that has a huge amount to recommend it.

As part of the ongoing deluxe reissue series, Technical Ecstasy will be available in a magnificent five heavyweight vinyl or four-CD box set, including Steven Wilson remixes, live performances from the accompanying tour, replica tour book and a forty-page tome recording the album and colour poster. The centrepiece, though, is the original album, its eight diverse tracks marking a time when the band were able to stretch out, relaxed in their own abilities and leaving behind the turmoil of the legal struggles that overshadowed the recording process of the previous year’s Sabotage.

Whilst the general atmosphere was much more relaxed, Tony Iommi had the weight of producing the opus land on his shoulders, offsetting any benefit he may have seen by recording very much on their own terms and in their own way in the Miami studio.

The tales of the recording are well known, the guitarist allegedly trying to steer the band towards much more radio-friendly fare that would see them accepted by a larger audience as the world sought something new and fresh musically. Fractures began to appear, the quartet starting to let the musical differences and drug and alcohol addiction tear apart their relationships with each other.

The fact they managed to pull together enough to record the album was monumental, and the fact that so much of it was so good in itself was a miracle. Despite the critical hammering and public disappointment at the time, there is much more of a subjective view to be taken of the work now and whilst certainly eschewing rose-tinted spectacles, admitting some of it was far from their best work to date, it’s certainly a thing to be listened to and even is loved and cherished by many.

There’s the fiery spirit of The Who that seems to permeate Back Street Kids, the first number of the album a straight-ahead hard rocker made with wrecking ball intensity. Heavy-duty riffing and the thunderous pairing of Bill Ward and Geezer Butler adding weight and excitement, alongside Ozzy howls, “I’m a rock ‘n’ roll soldier, gonna play it until I’m dead” all adding up to something that bordered on cliché but was done with such intent as to be a statement of intent, rather than tropes of the genre.

What added another layer to the work was the use of Jeff Woodroffe on keys, his playing sprinkling a little magic throughout the album and a revelation to those stumbling upon the opener, some splashes of extra colour in amongst the attack of Iommi and Co.

Continuing in this vein, You Won’t Change Me is an organ drenched Gothic outing that wouldn’t seem to be out of place on their earlier outings, the impressive guitar solo and descending pattern wreathed in atmosphere. From that, things take a decidedly left-field turn with It’s Alright, a piano-led pop song/ballad.

While this may have caused some to check the sleeve notes and start writing a letter of complaint about faulty pressings on a Sabbath album, it’s actually a fascinating outing, especially as it features drummer Bill Ward on lead vocals. Sounding like something from a Wings album, it’s well written, and the solo is yet another fine example of just why the guitarist is so highly rated, Ward’s voice also a gentle revelation in this least typical of all the Brummie’s catalogue.

The drummer gets the chance to show his other side on the percussive fireworks of Gypsy, the relentless pounding both brutal and done with a huge amount of verve and swing. The juxtaposition of guitar and keys throughout the song, along with Osbourne’s delivery bringing to mind a cross between The Sensational Alex Harvey Band and Queen, vocal harmonies add a cherry to the top of the cake. All Moving Parts (Stand Still) brings the funk, Butler’s bass driving the tune, the outcome both heavy and somehow eloquent and elegant.

In retrospect, Rock’ n’ Roll Doctor seems a very much by the numbers track, tapping into the mid-’70s hard rock sound and aimed squarely for the heartlands of the States rather than their own Black Country. In itself, not a bad thing and totally understandable at the time to seek something radio-friendly to keep the passion for the band alive, it comes over a something of a compromise, neither dark enough to really capture that Sabbath sound but also not as unexpected as others on Technical Ecstasy. Those seeking a well-constructed slice of radio-friendly Metal could do a lot worse than this, just don’t expect fireworks.

Once more, the unsettled and somewhat constantly changeable nature of the album rears its head in the stately She’s Gone, its lush orchestration and acoustic guitar washing over the listener, wrapping them in a warm embrace. You can read about Marie Rottrová’s 1981 version of She’s Gone, which had to be approved by communist Czechoslovakia’s Validation Commission, here.

The album then closes with the heavy AOR of Dirty Woman, harmonies stretched out and a plethora of nice touches, Iommi’s guitar work frantic at its close. It’s a hard-hitting end to what was a difficult album for band and fans to fully grasp, both seemingly wrestling with its content and the future, but a doubtless intriguing ride whichever way you look at it. 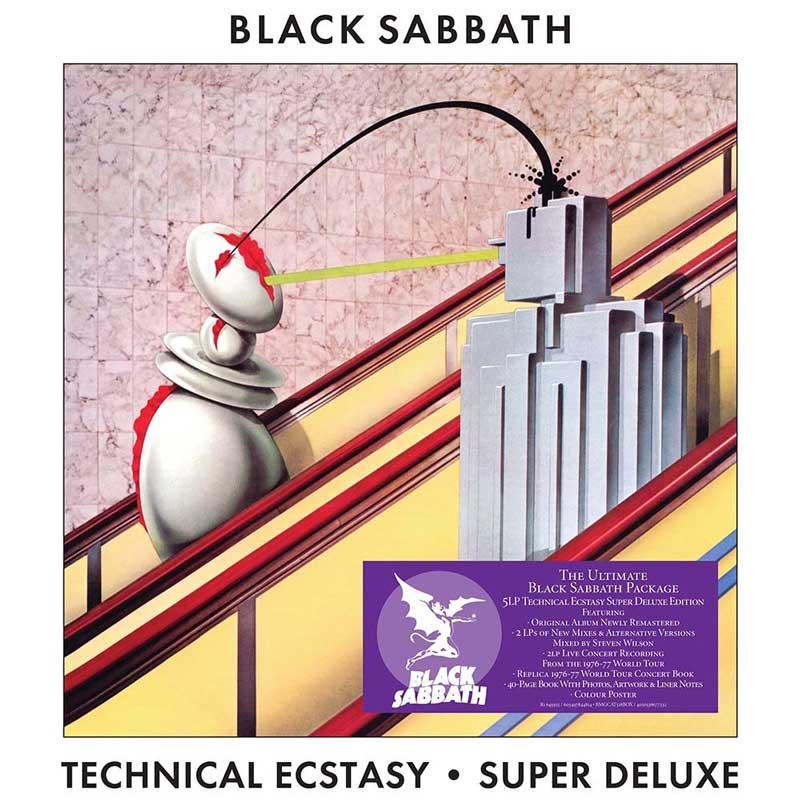 With an iconic cover by Hipgnosis alluding to robotic copulation, the release certainly caused a stir at the time, and the Steven Wilson remixes adding another patina to what is their most eclectic release, it takes it into the realm of being able to see what was and what could have been.

Wilson’s work, whilst loving, is in no way meant to replace the originals, he just adds his own interpretation to the recorded material and is a sonic experiment that is well worth exploring. With the additional material in the enclosed programme and books enclosed in the box set, it’s an immersive experience and one very easy to get lost in, the very act of delving deeper, shedding new light on the album and the mythos of the band at that time.

Whilst the old phrase says that familiarity breeds contempt, the polar opposite is to be found here, a warmth engendered that was missed way back upon its release in September ’76, and it’s a much-needed re-evaluation of this particular part of the Sabbath back catalogue.

Whilst the studio album was somewhat eclectic, to say the least, it’s on the live discs that accompany the set that we see the band at their most feral and animated, literally unleashed from the constraints of the studio.

Recorded on the lengthy tour to support the album, the performances reflect the state of the band at the time, the quartet dangerously on the edge but turning all that volatility into something that truly sparks with electricity and edge.

Given that it was this tour that saw up and coming young brawlers AC/DC opening for them, the veteran combo saw they needed to up their game considerably to compete with the hungry young upstarts, and that’s exactly what seems to fire the tension here, Sabbath knowing it wasn’t just their hard-won legacy they were fighting for, but for any future they had.

Whilst things would inevitably fall apart by the time they were recording follow up Never Say Die, Ozzy having already briefly quit the tour, this saw the legendary band at their most untamed and pugilistic, their inventiveness and raw power given its head.

Technical Ecstasy is a vital part of rock history, despite how its pros and cons are viewed and as such should be thoroughly explored.

With its stark picture of a legendary band at a crossroads, the release of this Super Deluxe edition lets you into the story like never before and that in itself is worthy of the admission price alone.

Technical Ecstasy is available from blacksabbathband.lnk.to/technicalecstasydlxPR 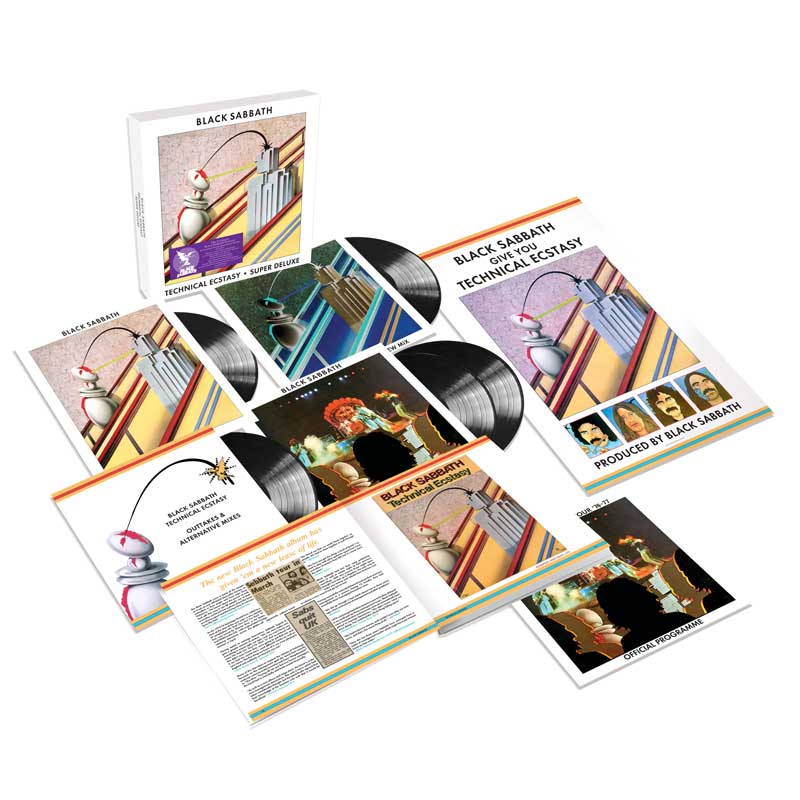