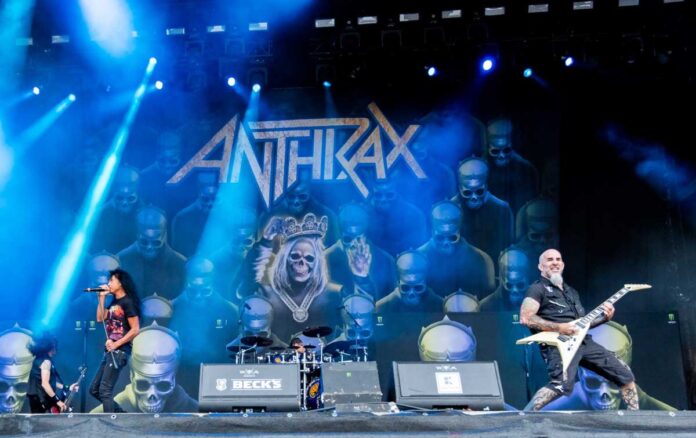 Anthrax, the American Heavy Metal band, are still celebrating its 40th anniversary, releasing their live stream concert, which was recorded the day they clocked 40 years, on July 18, 2022.

The band has had members come and go over the years, including one of the founding members, Dan Lilker. The band currently consists of Scott Ian, Charlie Benante, Frank Bello, Joey Belladonna, and Jonathan Donais. So far, the band has released numerous albums and singles and has received numerous certifications across some of their projects.

Pioneers of the Thrash Metal genre

One of the groups responsible for the development of Speed Metal and Thrash Metal is Anthrax. Early albums featured a conventional Thrash Metal sound, and the band was distinguished from its contemporaries by its use of humour and comic book allusions in the lyrics.

According to Rolling Stone, Anthrax was one of the few Heavy Metal bands to win critical acclaim and revolutionize the genre in the 1980s. Power chords and “chugging” pedal points provided the sound impetus in the “aggressive and head-pounding” approaches of the original guitarists Scott Ian and Dan Spitz.

The band has been going strong for almost 40 years, releasing 11 studio albums, earning numerous gold and platinum certifications, six Grammy nominations, and a slew of additional honours from the public, the music business, and fans. The group was the first Metal band to have its music played on Mars when NASA played Got The Time to awaken the Mars Rover in 2012.

The group also helped break down racial and genre barriers in 1991 when they collaborated with Public Emeny on the track Bring The Noise. Anthrax is a member of The Big Four, the four bands that created the Speed/Thrash/Metal subgenre, together with Metallica, Slayer, and Megadeth.

As part of their 40th-anniversary celebrations, the band is set to go on a mammoth worldwide tour, where they will play numerous dates all over the globe. Indeed, the band members are going to have plenty of time on the road, and with Scott Ian being a known enthusiast of games, including poker, it would not be a surprise if they were to use the rare downtime that they are to have while on tour.

Indeed, the 40th Anniversary celebrations have already begun as a concert was held in Den Studio in Los Angeles, United States, to mark the beginning of the festivities, but the celebrations had actually started in March of 2021.

The band performed a series of songs from their many available projects for 2 hours, with over 50,000 fans watching and cheering. The Thrash Metal band, and one of the genre’s pioneers, had decided to embark on their worldwide tour in 2021, to mark their 40th anniversary. However, the plan did not come to fruition because of the worldwide pandemic, thus delaying it until now.

They are currently embarking on their long-awaited worldwide tour, which started in North America on July 26, 2022, with Black Label Society alongside Hatebreed, and they will continue their tour in UK and Europe in late September to headline a five-week run.

The tour in North America will last throughout August 2022 and will see the band perform in event centres around the United States and Canada. After their break, the month of September will see them continue their tour and keep entertaining their fans.

Fans have already been able to enjoy a lot of what Anthrax has had to offer, as they released the entire performance of their 40th-anniversary live stream concert, plus never-before-seen rehearsal recordings and Scott Ian’s New York City “walking tour” which looks at the events that played a role in Anthrax’s formation and history back in July, with fans from all over the US and Europe able to purchase it.

The tracklist of the 40th anniversary live concert consists of the following songs: Time/Fight Em’ Til You Can’t, Madhouse, Caught In A Mosh, Metal Thrashing Mad, I Am The Law, Keep It In The Family, Lone Justice, The Devil You Know, Be All End All, Now It’s Dark, Antisocial, In The End, Medusa, Evil Twin, Indians, Skeletons In The Closet, Blood Eagle Wings, Bring The Noise, A.I.R. and Among The Living.