I am a huge fan of the five piece Kent based band Collateral, who were the breakout stars of Ramblin’ Man festival filling the “introducing” field to full capacity. So when I got the nod to interview lead singer, Angelo Tristan, I jumped on my laptop and got zooming for Metaltalk.

Interviewers – alway check your backdrop, as when I dialled in with Angelo, my silver discs were on display, as were my impressive range of cooking utensils, Tristan laughs as he notices my background and admires my spatulas. “I love a good spatula”, he announces.

We start the interview with the subject on everyone’s mind, the lockdown.

The band are renowned for their anthems, their 1000 watt gigs, their tours with Bon Jovi, Heat and Skid Row. The dudes were just about to embark on a world tour including Japan and the USA, but then the pandemic kicked in and the group were forced to stay at home and in the studio.

Collateral have not been resting on their laurels. Angelo and the band have been busy working on their second album plus have gone back to their epic self-titled debut album and have remixed this for a second release, with some very special guest star musicians. Angelo reveals, “it is a re-release with a lot of twists.”

Obviously, frustrated not to be on the road playing to the fans, Angelo says, “there is nothing like being on stage and seeing everyone rocking out in front of you – internet gigs are just not the same. We are a band who love to perform live, we give it our all.”

Indeed, playing gigs online is not for this balls to the wall band, they want to see the fans and blow them away with their five part harmonies and brilliantly crafted Rock anthems.

The band promise to turn up to their next gigs in their new Collateral van complete with pyrotechnics.

So watch out The Rockdown in Leamington Spa in September, as I am promised we are in for a totally smoking gig. No matter whether they are playing a stadium or a small venue, this band deliver. The upcoming gig on the Sunday of The Rockdown festival will be a mix of old and new songs from their hefty setlist.

Angelo says that from May, the band will rent a studio and get jamming ahead of the gigs. I can see he is itching to get back with his band brothers and rehearse the new five piece format, with the addiction of Louis and Rob, who the singer says adds another huge dynamic to the band, with incredible five part harmonies and keyboards to boot.

Legends of Rock is run by Eddie, Elaine and Jus Yates, affectionately known as “The Bastards” and it really is the music party of the year.

The Rockdown is a spin-off of “Leg-ends”, as we call it, and will take place in September in the beautiful Royal Leamington Spa. This quiet historical location will not know what has hit it as hundreds of us descend on the Assembly Rooms from September 3rd – 5th.

There are promises of a cheese party and curry club in Leamington Spa, so I asked Angelo what he would bring along – he laughs and answers “Party Cheese” and his preferred curry would be Phal – so we had better make sure there is plenty of milk on hand to help.

I asked Angelo what would be on their rider, no swan sandwiches for these dudes, they say they will be happy with bread and pineapple juice.

Angelo is one of the best frontmen in the biz right now and was approached to appear in the Aerosmith biopic as Steven Tyler – with the looks, the swagger and the talent, it was really a no brainer.

Although the singer said he has never snorted so much Vitamin D or cocoa powder playing one of the “Toxic Twins”.

I chipped in it could at least have been a line of ants – like Ozzy Osbourne and Nikki Sixx famously snorted in Texas. But hey that must have been some great protein. So look out for this film debut in the UK soon.

There is no doubt Collateral are going to be huge.

Yes, they have had to take a year off, but with upcoming world tours with Skid Row and Heat and even more big stadium shows to be announced, I am convinced they will return to the stage with even more fire in their belly.

And of course even more fire from their transit van, like Rammstein on wheels.

See you in the socially distanced mosh pit. 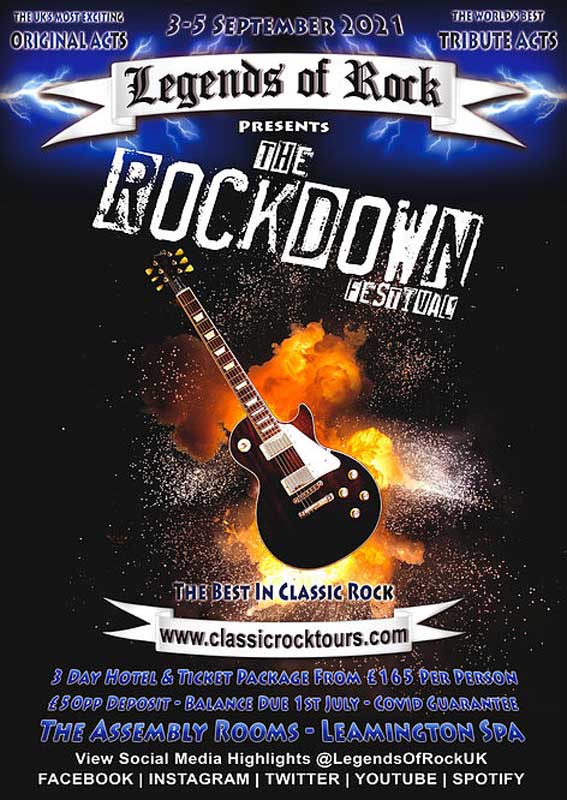 As always, Classic Rock Tours only books the best. All of our bands are leaders in their own field and try to give their fans an experience as close to

As always, Classic Rock Tours only books the best. All of our bands are leaders in their own field and try to give their fans an experience as close to the original as possible.

Tickets from classicrocktours.com/rockdown
​
The incredible musical skills of our bands have contributed to the enormous success of Legends of Rock Festival which has now become an unmissable Rock holiday for many hundreds of discerning Classic Rock fans.

You can get in the mosh down the front or get yourself a table with your mates and listen to the music whilst supping a pint.

The Mercy House / Back with AIC classic 'Dam That River'