If this past year has taught us anything, it is that we should never take a live gig for granted again, and that does not just mean the performance. The whole experience before, during and after is something that should be cherished a lot more from here on in.

Things like the perfectly chilled pre-gig beer, before you get the overpriced warm one inside the venue, the sticky floor, the stench of a thousand mens urine as you escape the bass solo and take cover in the eye stinging gentleman’s convenience.

Then of course there is the guy standing next to you who is letting go ‘silent but deadlys’ all night and then looking at you in disgust. And when the house lights go up you forensically dissect the setlist while trying to regain your hearing.

While such pleasures may be inching closer, streaming events are proving a popular hit for those needing to feed that gig habit.

And they do not come much better than Joe Bonamassa, Live from Austin City Limits. 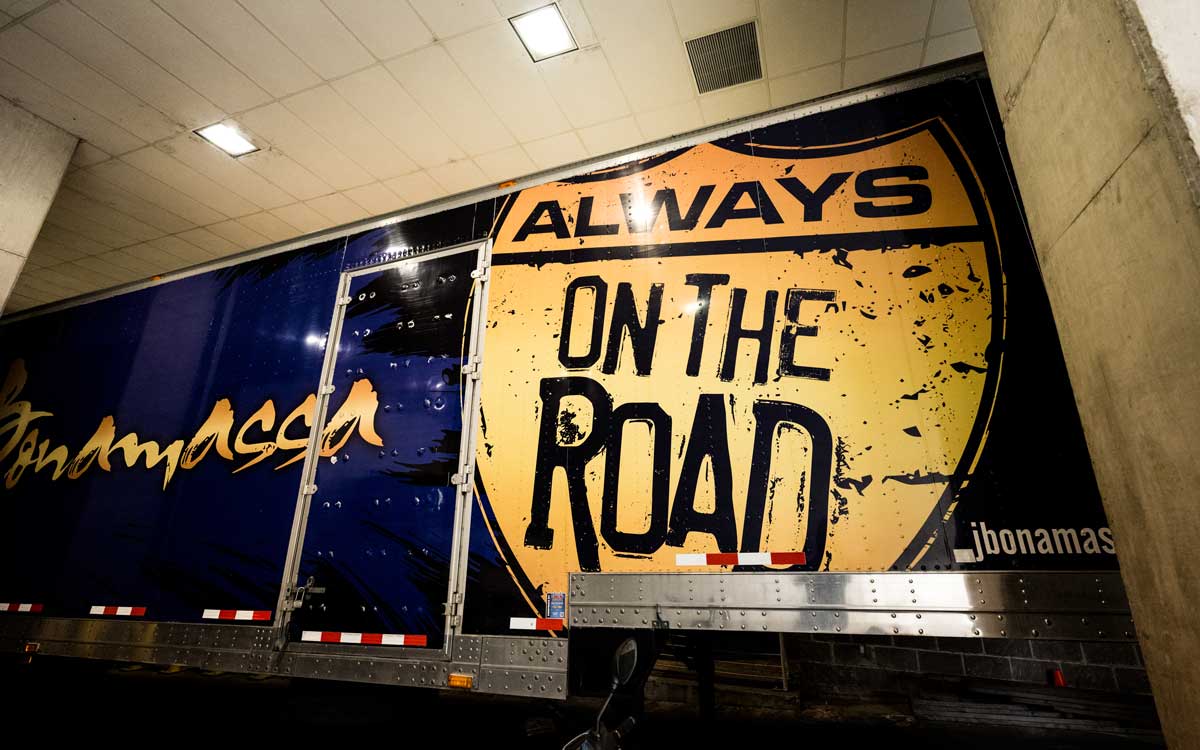 And what makes this pay-per-view gig a little more sweeter is that’s it is the fans who picked the setlist. Although Joe had a 700 strong socially distanced audience at the The Moody Theater, watching live on a device in the comfort of your own four walls was a treat, though not one we want to get used to.

Whether or not you flicked off your sitting room light to get that showtime effect, the pounding opener ‘Oh Beautiful’ up loud really did fill you with proper gig chills.

Decked out in his usual offbeat jacket with matching pants, trademark shades, slicked back hair and backed by a trusted rhythm section of drummer Anton Fig and bassist Steve Mackey, the Power Trio, along with backing singer/percussionist Jade MacRae, brought ‘Love Ain’t A Love Song’ kicking and screaming out of lockdown like a caged animal.

Reassuring the crowd his band all tested negative for COVID-19, he pokerfaced with tongue firmly in cheek that he tested positive for Crack and PSP before giving Gary Moore fans a sumptuous treat with his always smokin’ version of the Irishman’s ‘Midnite Blues’.

Latest album and one of his finest in recent years ‘Royal Tea’ was represented with ‘Lookout Man’ and with much more  sizzle than it’s studio counterpart.

The haunting tone of ‘Beyond The Silence’ always hits a nerve in the live arena, but tonight it’s stoney lyrics hit home a lot more, no matter how you read them.

Covering Tom Waits tunes can be dangerous territory, but remoulding songs to practically make them your own is second nature to Bonamassa and his all conquering take of ‘Jockey Full Of Bourbon’ virtually dragged you through your device and plonked you stageside with a soul reaching performance.

Sharing a story of bittersweet high school love, ‘Miss You, Hate You’ which in it’s original draft had “fuck” instead of “hate” in it’s title, had legendary drummer Anton Fig remind us of his brilliantly innovative style and features a finger splitting solo that would take your head clean off.

Then another explosive cover, this time Stevie Ray Vaughan’s ‘Scuttle Buttin” where if you look close enough, you might see smoke begin to rise off the searing hot frets of his Stratocaster.

The song that elevated Bonamassa’s career to a more acclaimed level ‘The Ballad Of John Henry’ closed out the main set with a wallop, with Jade MacRae temporarily stealing her employers thunder, before that palatial solo took centre stage and never sounded better than in the Texas air.

With no time to flick the kettle for a Hob-nob and a cup of tea, the New Yorker returned alone with acoustic in hand for a traditional bare bones rendition of ‘Woke Up Dreaming’. Normal service then resumed and the four piece shook Texan foundations with a knee rattling ‘Crossroads’ and brought the curtain down on an explosive night of Blues Rock.

It must be noted the night was not all about Bonamassa, a cut of ticket revenue went to his ‘Fueling Musicians’ program, a cause providing financial support for touring musicians hit hard by the COVID-19 pandemic.

Whether you were lucky enough to be in Texas or simply viewed from your front room, greenhouse or even sat on the toilet, this was a special night which will live long in the memory.

The live stream concert will be available “On-Demand” for 1 month after the live airing to anyone who purchases tickets.

Fans who purchase the virtual live stream ticket will have the chance to watch the entire concert for repeated viewings until May 2021.

Tickets are available from jbonamassa.com/streaming/acl/

Previous articleGeorge Lynch: “The best that Dokken ever was, was on the Aerosmith tour”
Next articleAngelo Tristan / Set for an explosive, pyrotechnic filled summer with Collateral