Given the every-changing shape and form of the band over the years, it was most apt that this exquisite show was book-ended by ‘Perpetual Change’ and ‘Roundabout’. And so it was, for the first time since well before the turn on the century, that the affirmative triumvirate of Jon, Trevor and Rick shared a stage in London again. 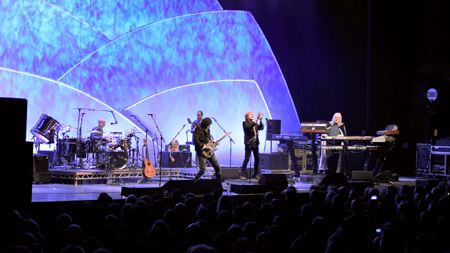 Although, pre-tour indications were that new collaborative material would be featured, in the event the set-list for last year’s US tour and the current European jaunt remained based on legacy tracks. The only recorded and released collaboration between Rabin and Wakeman remains ‘Never Is A Long Long Time’ from Rick’s ‘Return To The Centre Of The Earth’ and even that is essentially a clever Trevor solo track.

Also slightly disappointing was the lack of any songs from ‘Talk’ which for many was the creative peak of the 90125-era band and the only album where Jon and Trevor worked as true song-writing partners from the early idea conception and demo drafts. 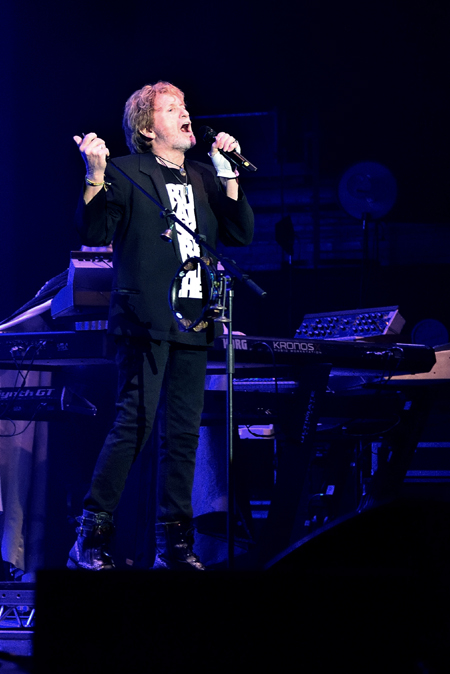 All that being said, there’s such a wealth of songs in the Yes canon, that vied for inclusion on a tour that had been mooted and anticipated for over five years. The main hope is that this unproven live configuration would not only do justice to the classic tracks and include more than simply ‘Owner of a Lonely Heart’ from the Rabin years.

In the event, this two-set show more than lived up to expectations and was rapturously received. This wasn’t just about the infectious nostalgia of seeing Jon and Rick united in a full-band context, it was in the grace, passion and joy of the performance that have not been witnessed in the House of Yes for a very long time.

The timeless instrument that is Jon Anderson’s voice was breath-taking. With that unearthly fragile power that is forever the melodic soul of Yes, it caressed on ‘And You and I’ exhorted on ‘Awaken’ and soared on ‘Heart of the Sunrise’. His stage presence was magnetic and magnificent, exuding such joy that it was not possible for the music not to touch your soul. 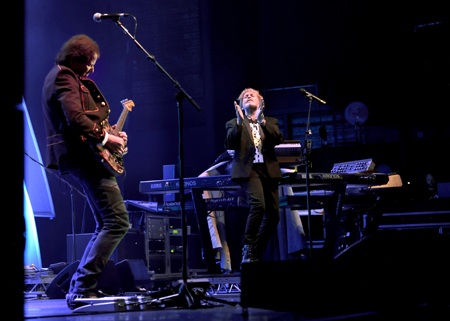 Despite his long hiatus from Yes, Rick Wakeman has retained a high profile through media work, solo projects and revisiting classic works, not including the mythical ‘Return To The Centre Court Of Billie Jean King Arthur’. While his technique is beyond reproach, particularly on his wonderful piano-based works, his recent choices of less-than-classic keyboard sounds can be sometimes distracting. Gladly, this was not the case tonight, every lustrous Mellotron fill, dextrous Moog solo, mellifluous Korg chord and Roland riff was tonally perfect and executed with virtuoso zeal.

The return of prodigal son of Yes and catalyst for their 80s re-invention, Trevor Rabin, that was perhaps the most anticipated, when this new line-up was announced. With a long-standing and lucrative second career scoring movies as diverse as ‘Snakes On A Plane’ and ‘Armageddon’, until the first ARW shows in the US in 2016, Trevor had not really strapped on a Strat on stage for twenty years. The question was whether this supreme playing skills could be restored to full match fitness after such as long lay-off, as if we ever we doubted that.

Looking lean and fit and clearly revelling in having been unleashed from the studio, his playing was precise and powerful on the songs he had contributed to the band, such as the sublime ‘Changes’, but equally respectful on songs ever-associated with Steve Howe. This was best evidenced on a scorching version of ‘Heart Of The Sunrise’ with his doubling of Rick’s keyboard lines gave the song a new intensity, without detracting from the artistry of the original. 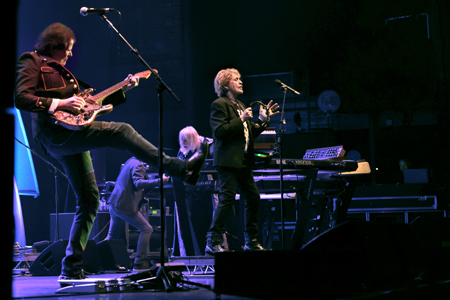 His voice is also in great shape, delivering strong lead and backing vocals on ‘Lift Me Up’ and ‘Rhythm Of Love’. The only track where I yearned for the elegant minstrel guitar of Steve Howe, was ‘And You And I’, which was wonderfully sung by Jon, but missed the subtle colour that Steve brought through use of the twelve string on the intro and outro as well as the slide guitar solo.

Trevor’s longstanding drum buddy, Lou Mollino III, is along for the ride (the crash and the hi-hat) with a punchy and slightly groovy style that worked well throughout the set. He was even afforded a short drum solo to bridge the gap between ‘I’ve Seen All Good People’ and ‘Lift Me Up’ which was not particularly well structured, but maintained the pace of the show as the band shifted decades.

Perhaps the hardest role was played by renowned prog musician Lee Pomeroy. With credits that include stints with It Bites, ELO, Rick’s solo band and Steve Hackett, Rickenbacker-ready Lee is an inspired choice to fill the now astral-travelling boots of the sadly departed Chris Squire. As well as mirroring the intense melodic style of his progenitor, he also provides strong and confident backing vocals that enable the band to deliver the three-part harmonies that underpin many of the classic songs. 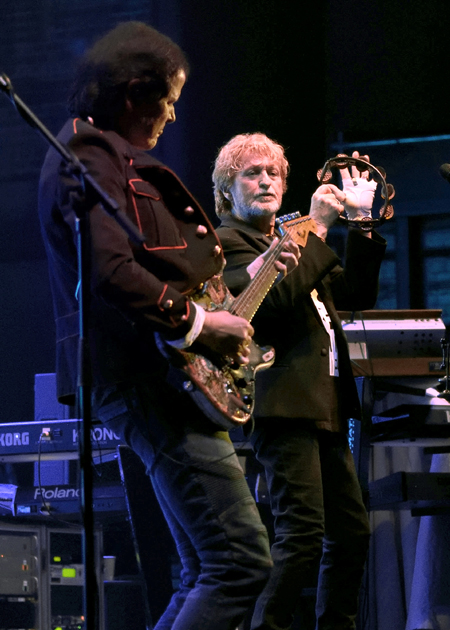 For some reason, during the first set, the bass was far from prominent in the mix and lacked the treble edge that remains key element to the DNA of the Yes sound, with Squire’s bass as the lead instrument driving the band. Thankfully, the revealing science of the front-of-house sound was adjusted for the second set, ready for Lee to deliver supreme homage to the man, first through the iconic intro of ‘Heart Of The Sunrise’ and then on the fabulous chunky riffage of ‘Long Distance Runaround’ that segued into a masterful rendition of ‘The Fish’.

For its minor flaws, this was a show to savour and one that will live in the memory for more than a long, long time. A large part of this was the great chemistry and clear mutual respect between all band members, evidenced by the broad smiles, knowing looks and the relaxed interaction on stage. When Rick and Trevor went for a wireless walkabout up and down the aisles of the Apollo during an extended version of ‘Owner Of A Lonely Heart’, it wasn’t about showing-off to the audience who could widdle fastest, it was all about interacting with an adoring multigenerational audience and seeing the tears in eyes and smiles on faces up-close. 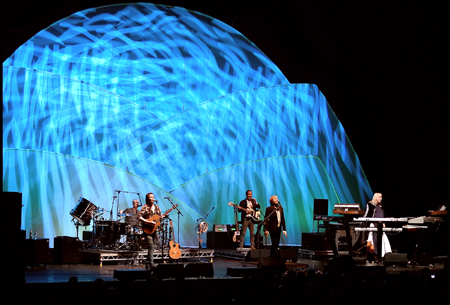 Simply put, this was a great celebration of Yes music, played with the spirit and verve that somehow the alternative touring line-up cannot match. The presence of ARW does not invalidate the Howe-fronted band, as the latter should be applauded for continuing to create new music within the Yes template. Also, it remains to be seen if the ARW will come good on the promise of new material and whether Trevor can resist the lucrative lure of the production studio for long enough for ARW to fulfil its promise as a going concern, rather than another short-lived branch in Yes’ labyrinthine family tree.

It’s bittersweet that that band will finally be inducted into the Roc’N’Roll Hall Of Fame in two weeks’ time, given that it will be attended by Chris’ widow Scottie, rather than Chris himself, There’s sad irony in that it was Squire’s death that acted both as the catalyst for ARW to finally progress and for the previously warring factions of the band to put aside their differences to attend in a unified celebration of their collective contribution to contemporary music. As they said in the aptly titled ‘Tempus Fugit’, it’s taken them almost fifty years to “navigate waters and finally answer to yes”.

Setlist:
Cinema
Perpetual Change
Hold On
I’ve Seen All Good People
Drum Solo
Lift Me Up
And You And I
Rhythm Of Love
The Meeting
Heart Of The Sunrise
Changes
Long Distance Runaround
The Fish (Schindleria Praematurus)
Awaken
Owner Of A Lonely Heart
Roundabout