It is safe to say that 2020 has been a shitty year. That is about to change, as on 13 November 2020 when Aussie boogie titans AC/DC release their new album – ‘PWR/UP’.

‘PWR/UP’ sees Brian Johnson return, Phil Rudd back behind the kit and Cliff Williams coming out of what was surely the shortest retirement in Rock.

Right from the first chiming chord that heralds in ‘Realize’, the grin on your face will be HUGE.

AC/DC are back and they sound awesome.

Brian Johnson is in fine voice throughout and the band sound re-energized.

There is not another band on the planet that does what AC/DC do as well as they do. Countrymen Rose Tattoo had a stab at it and more recently, Airbourne gave a pretty good try at emulating that signature AC/DC sound. But let’s face it, there is only one AC/DC!

Sceptics might say that the band have been releasing the same album for almost 50 years, but who cares when they sound this good?

Second track ‘Rejection’ carries on where ‘Realize’ left off and it suddenly dawns on you just how badly you have missed AC/DC.

Yes, they do release albums that sound VERY similar BUT that is exactly what you want from AC/DC – they are the audio version of your favourite old jeans.

First single Shot In The Dark’ is up next and that needs no description as I am sure you are all familiar with this track.

‘Through The Mists Of Time’ sticks it to the naysayers that pronounce AC/DC a one trick pony. A glorious melodic bluesy riff finds Beano once again in fine voice. It is different but it is still AC/DC.

It is back to business as usual for ‘Kick You When You’re Down’, then the opening plucked riff of ‘Witch’s Spell’ makes you grin like a Cheshire cat. If you are going to rip off anyone, you might as well rip off yourself!

‘No Man’s Land’ is, for my ears anyway, the weakest track here, but that is a bit like complaining that diamonds are too hard or gold is too shiny!

‘System’s Down’ and ‘Money Shot’ are both slices of vintage AC/DC and ‘PWR/UP’ ends like it began with the glorious ‘Code Red’.

It has been six years since ‘Black Ice’ and this album has been sitting in the can for almost a year. It goes without saying that Phil Rudd and Cliff Williams are AC/DC’s perfect rhythm section.

The big question for this album was “can Brian Johnson still cut it?”

The answer is an emphatic YES!!

Thank you AC/DC for releasing ‘PWR/UP’ now and easing our 2020 Covid blues. 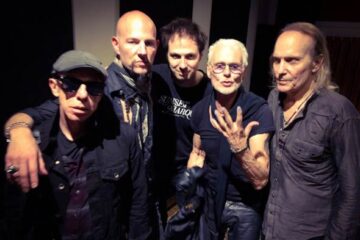